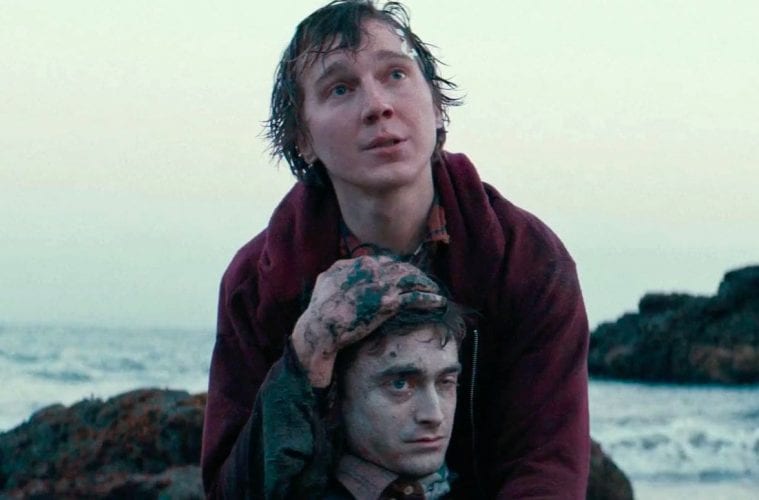 The distinctive, highly original score from the new movie Swiss Army Man has a local tint — it was composed by Andy Hull and Robert McDowell, two members of the Atlanta-based band Manchester Orchestra. It’s a project that veers quite a ways from the rock sounds the band is normally known for.

Their music here strays from the typical overly-orchestrated Hollywood score. In the film, opening in Atlanta today, Paul Dano stars as Hank, a young man who is stranded on a deserted island and contemplating suicide — until he makes an unlikely friend in Manny (Daniel Radcliffe), a corpse who not only can talk but has mystical powers of sorts. The score effectively conveys what’s in Hank’s head as he contemplates his life.

Hull and McDowell had worked with the film’s directors Dan Kwan and Daniel Scheinert (referred to as “the Daniels”) and were receptive to another project. “We made a music video in 2011 (for the song “Simple Math,” which was nominated for the MTV Video Music Awards) with the Daniels and loved collaborating with them,” Hull says. “In January of last year they asked if we wanted to write for this. That began the whole process.” Hull and McDowell call Atlanta home and have never really thought of leaving the area. They met 15 years ago, when they would go and make music together in the basement studio of Robert’s house. They formed Manchester Orchestra in 2004 and they have five studio albums. Hull is Manchester Orchestra’s rhythm guitarist, as well as singer-songwriter, while McDowell is the lead guitarist.

Although this was their first film score, McDowell says there was no hesitation in taking it on.

They were shown the script and the directors made it clear what they wanted in terms of the music. Until the end, the score lacks any musical instruments, with sounds only a body could make or that could be found in a natural environment. “We had no idea what that all meant,” Hull laughs. Yet the two figured it out. “Even though we didn’t know quite what it was, and how to go about doing it, we knew that we would be learning along the way. It was very exciting.”

Working together with the Daniels proved to be a collaborative effort, and they all agreed on one aspect. The music plays a third character in the film so the score had to be exact — and expressive. “So much is inside the lead character’s head,” says Hull. “It was important to explore every aspect of that. In a lot of ways, the movie is a fantasy. It’s kind of surreal and real at the same time. A big part was the opening of the movie — it sets the tone. For us, it was really important to have these songs that the actors could sing on the set and feel the emotion of.”

Along the way, there were many head-against-the-wall moments, including giving dimension to a dead body. Yet the two enjoyed the challenge. “A lot of it was trying to get the right emotion and learning how to record stuff,” says Hull. “There are more movements in movie compositions that don’t follow any repetitive rhythm. That was a new adjustment.”

The duo had to approach the music in a piecemeal manner rather than focus on the amount of work due. “We knew we were making a large body of work,” says Hull. “We couldn’t get ahead of ourselves and think that we had to do 35 songs for this because that would have been daunting. We would work several hours a day, get results, and have a ‘high-five’ moment.”

Being on the set for some of the filming was a tremendous experience. Hull has a cameo as a cameraman. “Being there, you go, ‘Wow.’ I felt like I had dropped in from another planet.”

He and McDowell worked on the score for an entire year. They finished creating and placing it just in the nick of time, four days before the film’s premiere at this year’s Sundance Film Festival. Seeing it at Sundance was an exhilarating but nerve-racking moment. “It was amazing,” says Hull. “No one had any idea what to expect.” The two had seen it on the sound stage as they were mixing it but the audience added another level of nerves.

They hope to see it again this weekend with friends as it expands to Atlanta. The film opened June 24 in three U.S. theaters and had the highest weekend per-screen box office average of any film in general release.

If the right opportunity comes along again, Hull and McDowell would be open to composing another film score. Especially if it were something that spoke to them. “We were passionate about this music,” says McDowell. “It also allowed us to experiment and the process really let us grow.”