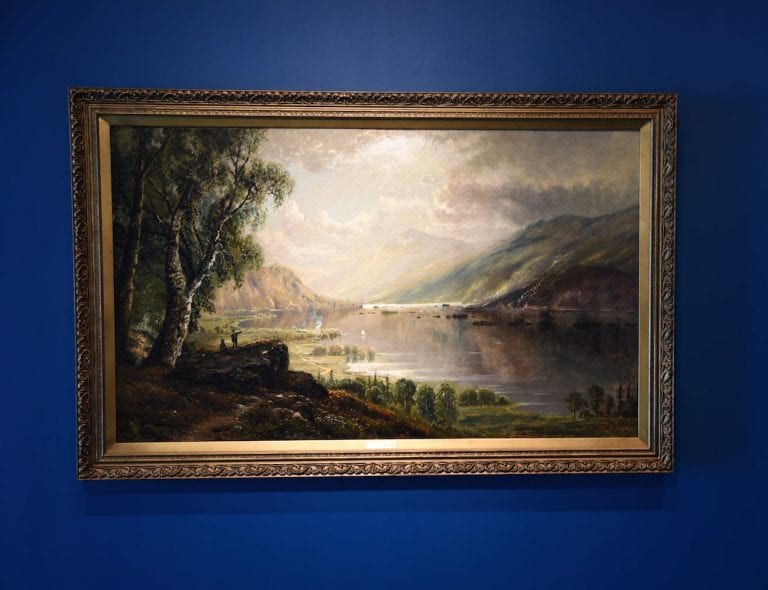 Edmund Darch Lewis, The Overlook, 1870. Courtesy of the Zuckerman Museum of Art.

Review: “A View Beyond the Trees” gives us an honest lay of the land

How do we interact with our earth? How have we? A View Beyond the Trees, a show with four movements –- an amalgamation of three contemporary artists and selections from the Zuckerman Museum of Art’s permanent collection –- is an intelligent exploration of the relationship between artist and landscape that transcends time, perspective, technology and ourselves.

The first image on view is a piece titled The Overlook (1870) by Edmund Darch Lewis from Kennesaw State University’s collections. Newly conserved, the taut canvas showcases the heyday of 19th-century American Landscapes and the rich beauty and craft of the Hudson River School. Light breaks between two verdant mountains, a glittering lake between them. Underneath a great oak on a nearby cliff, a white man points forward. Is he pointing to the landscape? It almost seems as if he’s directing my gaze to Daniel Sachs’ wall copy.

But before following Manifest Destiny forward into what’s to come, I tarry a bit longer in the introductory era.

In the neighboring gallery, a selection of works by Lewis’ successors and colleagues awaits. KSU professor Daniel Sachs has curated a deep appreciation of landscape works from Kennesaw’s collections, had them lovingly restored by the Atlanta Art Conservation Center and hung them in the cerulean-walled gallery immediately behind Lewis’ ambitious traveler. Sachs has ensured that no two landscapes are alike, selecting works with techniques as varied as the landscapes themselves.

Viewing today, one is left not only to observe what we see but what is absent from these paintings. In the era that they were created, time spent in nature was viewed as a communion with God. Great thinkers of the era and times preceding it – Thoreau, Wordsworth, Hazlitt and Rousseau – advocated for the virtue of nature, a philosophy shines through in all of these works.

Today we take to nature to “unplug,” to disconnect. But these works amassed in this cavernous gallery lead me to recognize something else: no matter how much we do “unplug” we have thoroughly succeeded in obstructing our view of the world around us. One could be hard-pressed to find the riotous wavescape depicted by Harry Russell Ballinger (Surf at Bass Rocks, date unknown) without some man-made flotsam taking camp on the rocky shoreline. Certainly, the tranquilly smooth seascape of George Douglas Brewerton (Seascape, 1849) adjacent to it would boast a buoy or cityscape on the distant, blushing horizon. On the Impressionistic valleys and cliffs of Homer Dodge Martin’s Lake on the Catskills (1871), there are no power lines, no highways, no billboards. Would that be the case now? We’d have to hunt for such a sight. These obstructions have become so banal to us that they just about fall into the background. (Even the unseasoned traveler grows desensitized to the garish red “SEE ROCK CITY” billboards littered along Highway 24 after a while.) Their absence in these paintings now makes me question how we define and employ the word “progress.” Of course, this was not the intention of the artists at the time these paintings were made, but something brought to light when compared to the modern works that comprise the remainder of the exhibit.

With these questions posed, I follow the adventurer’s beckoning hand towards Dawn Holder’s modernistic take on progress, Grass Variation (2016). It is a striking juxtaposition, wittily presented by ZMA’s curator Sarah Higgins. Are we looking at Astroturf? Is it sod? No. These are porcelain tiles painstakingly fashioned to look like blades of grass, and they hug the invisible borders of what could very well be two suburban McMansions and the sidewalks and driveways that clear a path to them. Holder’s tiles are perfectly and lovingly combed, and though their color varies blade to blade, accumulated they make up one verdant, restrained landscape.

Though this work was made just this year, it harks back to an era less distant from our present than the gallery preceding it, but behind us nonetheless. Holder aims to evoke the controlled ideals of the Eisenhower and Kennedy administrations, the acme of post-modern temperance, in a way akin to Matthew Moore’s Single Family Residence. Holder forces her viewer to take humanity out of the equation. What are we to make of a landscape almost militaristic in its self-restraint?

In the ZMA’s second gallery we are brought to two interpretations of our present by artists Joe Hamilton and Stacy Lynn Waddell. Hamilton’s topographic works come with soundscapes – video collages of satellite images, 3-D renderings, and high-resolution scans. These digital collages manifest in many forms: looping projections, on HD screens which viewers can touch, and high-resolution prints. It’s easy to gravitate toward Hamilton’s more hypnotic moving images (Hyper Geography, 2011; Regular Division, Ed. 5, 2014; Indirect Flights, 2015). With Regular Division, Ed. 5, his witty incorporation of sound combined with its wall-encompassing size makes for an immersive experience. (An aside: use the bench for this, as standing to view the work may result in a brief bout of motion sickness.) That said, the witticism tucked into Hamilton’s printed works makes for some worthwhile social commentary. With Ikea Roof Terrace, Ed. 5, a billboard for “The Eden Estate” claims to deliver “your paradise in safe hands,” but in the distance four red flags flutter, indicating hazards within the azure scenery. What are they warning us about?

Stacy Lynn Waddell uses lavish gold leafing to bring humanity’s sordidness into perspective. EVERYBODY LOVES THE SUNSHINE, a nod to Roy Ayers’ 1976 album, is a phrase that could  just as likely be found on a mass-produced inspirational T-shirt as on Waddell’s work on paper; the fact that it faces a much more modest, less declarative work, Gazebo with Rectangle and Circle (for T.R.) makes for a chilling effect. The smaller work shows us the gazebo where police fatally shot 12-year-old Tamir Rice in 2014. The lighting of each piece causes them to lie flat and shine when viewed at certain angles. By moving around and interacting with the works, we are forced to engage with them more intentionally, to fully comprehend that landscape is much more than a landscape. These places became part of our history and cultural memory because of the atrocious acts conducted within them.

Most chilling is Waddell’s depiction of Trayvon Martin’s hooded sweatshirt, Hoodie (for T.M.), 2016. We are coached to think of this, too, as a landscape. It is a space once occupied by a 17-year-old boy that has become a symbol, space where Martin isn’t. Like with Holder’s work, this piece is made more powerful through its embrace of space, setting us up to reflect once more: What is progress? What are we, humanity, in the context of our surrounding world?