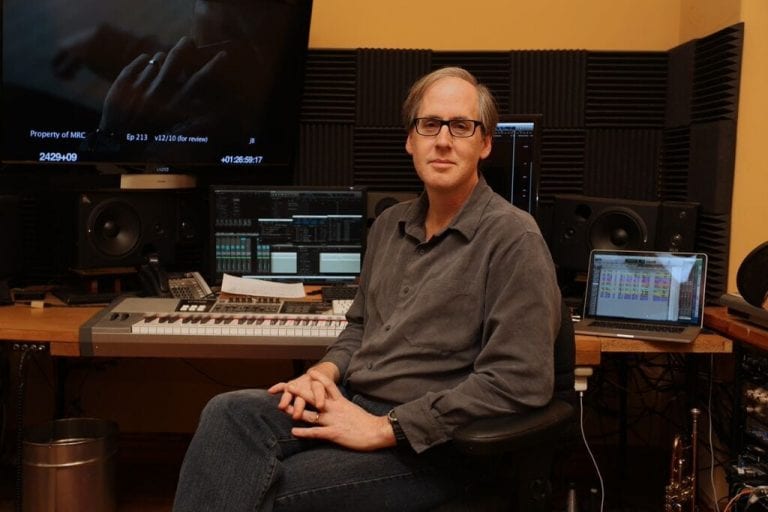 Composer Jeff Beal has turned scoring film and television into his own personal niche.

In March 2015 Serenbe launched their inaugural series, Art Over Dinner. An intimate dining experience for a limited number of attendees, the event provides a forum for artists to share their ideas and work in a relaxed group setting. Visual artist Leslie Iwai, choreographer Lauri Stallings and filmmaker Erin Bernhardt are among the previous guests and the next program on July 12 is “An Evening with Jeff Beal.”

The undeniable critical and commercial success of Netflix’s House of Cards series has inspired a new programming model that other networks and streaming services such as Amazon and Microsoft’s Xbox Live are scrambling to emulate. The Emmy-award winning series, which one critic described as “Tony Soprano meets The West Wing,” is often lauded for its creative concept, writing, direction and ensemble cast headed by Kevin Spacey and Robin Wright. What is sometimes less obvious but an essential aspect of the show’s success is the music score by Jeff Beal.

The Los Angeles-based composer, who has been working steadily in the film and television industry since the early 1990s, has received 13 Emmy nominations to date for his music and three statuettes for his work on two miniseries (The Company and Nightmares & Dreamscapes: From the Stories of Stephen King) and the main theme music for Monk.

House of Cards will certainly be a conversation topic at the dinner table, but Beal will also discuss his work process and collaborations with other filmmakers on such work as Pollock, the 2000 biopic of painter Jackson Pollock starring Ed Harris, and the controversial 2012 documentary, The Queen of Versailles.

In a recent phone interview, Beal discussed his formative years in San Francisco and other aspects of his career in music.

ArtsATL: Growing up in San Francisco, you must have been exposed to a lot of great music at local clubs and concerts.

Jeff Beal: It was amazing. It was the late ’60s and ’70s and it was a very eclectic scene. You had Tower of Power, the Latin jazz thing and the rock scene. And early jazz rock was starting to come to the forefront with Weather Report and guys like Chick Corea and Herbie Hancock doing really cool hybrid, experimental work.

ArtsATL: I read that your grandmother gave you the Miles Davis album, Sketches of Spain, when you first started playing the trumpet.

Beal: What’s interesting for me is that at a very young age I loved music. But when I started playing jazz and improvising on the trumpet, that’s when I was completely hooked and knew that I had to do this thing. It’s like one of those epiphany moments you have as a young person where you make a discovery and find something inside you that just has to come out. I still love jazz. I don’t play it as much as I used to but I still feel that jazz is one of the great training grounds of musicianship. If you can really play jazz well, you can do almost anything musically.

ArtsATL: I’ve often wondered about the scoring process in today’s entertainment industry. Are you usually brought in for consultation before the project begins or do you begin work when most of the shooting is already completed?

Beal: It’s actually changed quite a bit because the digital technology has changed. The work flow used to be that with film you had to cut a negative and you couldn’t go back [and make changes]. There’s a much more fluid process now between composer and filmmaker on something which has a longer gestation period.

Maybe I’ll be on a film while it’s being edited and I’ll be writing a score and the filmmaker will still be editing the movie and we sort of ping pong it back and forth. It’s really a fun way to work because the presence of music can often help a filmmaker to find the voice of the film and help solidify choices about editing. In the same way, what the filmmaker does informs the composer’s work.

I also enjoy working through the script stage sometimes. We did that on House of Cards from the very beginning and still do it. We’ll see the scripts and see the story breakdown and I’ll often compose themes for that season based on what ideas and emotional territory the season is going to explore.

ArtsATL: Your resume includes such a diverse mixture of projects, everything from the indie Western Appaloosa to the ABC series Ugly Betty to HBO series like Carnivale and Rome. When scoring a period piece like Rome, are you able to incorporate actual instruments and music from ancient times into the score?

Beal: Absolutely. That’s actually part of the equation. That was a good example of a show where I used a ton of instruments and sounds I’d never used before. And that was a great way to try and tell that story. But even though you’re trying to evoke this feeling of ancient time, you’re still writing for a modern audience so the music has to speak to 21st century listeners. It’s not like we’re trying to be completely accurate or use that language literally. But there is a way that you can refer to it and have that be part of the fabric.

ArtsATL: Some of the score for Rome seems influenced by certain styles of African music.

Beal: Yes, North African and a lot of wind instruments. Not just flutes but also the duduk. I found a bunch of recorders and a crumhorn, which is actually a medieval instrument. The zurna, an Armenian horn, was used in battles. It’s incredibly loud with a piercing sound. That was really great when something intense was happening. I actually bought this really cool two string violin on eBay from Egypt. It’s called a rababa. It plays these sort of scratchy, edgy drones. It was like being a kid in a candy store on that show.

ArtsATL: Among all of your TV and film music collaborations, have there been any that posed a particularly difficult or unusual challenge?

Beal: I think they all have their own challenges. In a way House of Cards has been an interesting creative journey because everything feels very layered and that’s fascinating to me. On one level, it’s a political drama, but on another level it’s kind of a Shakespearean/Machiavellian story and the writing takes on this very interesting character the way the actors perform it. It just feels really fresh…but it’s a very tricky tone to nail.

ArtsATL: At this point in your career, is the work mostly coming to you or are you actively soliciting new projects all the time?

Beal: It’s a mixture of both. There are definitely things that have created a lot of demand. I’ve gotten a lot of calls in the last couple of years from documentary filmmakers. I did this film Blackfish a couple of years ago (the main subject is Tilikum, the 12,000-pound killer whale that was a major Seaworld attraction in Orlando).

Based on that, I’ve gotten a lot of interesting work doing documentaries (Beal’s other recent work in this field includes When I Walk, And the Oscar Goes to… and Jessica Yu’s The Guide). Of course, House of Cards has created a lot of interest, not just in the film world, but in the concert world. I’m doing a flute concerto for a wonderful flutist in Sweden and they basically found me based on the music for House of Cards.

ArtsATL: Any other upcoming music projects or collaborations?

Beal: I wrote a choral work that’s going to be premiered by the Los Angeles Master Chorale in November. And I’m working with some choreographers on some ballet projects. I just finished this multi-media thing that I’m calling the House of Cards symphony. I workshopped it a few months ago so in the coming year or two, I hope to travel around with it, conducting and visiting some orchestras around the country and around the world.

ArtsATL: It seems like you’ve supported yourself as a professional musician ever since graduating from college. Was there ever a time when you had second thoughts about having a viable career in this profession?

Beal: Oh yes. I remember those years very well. Right after I got out of college, I was living in New York. I was playing salsa gigs and latin band gigs and thinking….where is this all gonna go? I was feeling that angst, you know? It was a slow burn. It was an overnight 30-year success I guess.

To do this, you have to have an obsession that transcends a lot of things including the reason you’re doing it. It’s not about the money. You love it so much that you have to do it. Every day I wake up and write music. I don’t need a vacation because I love what I do. The favorite part of my job is usually when I get to record a score and work with a wonderful group of musicians. In the case of House of Cards, we have a string orchestra and that’s when the magic happens, when you get people together interpreting and bringing something to life.