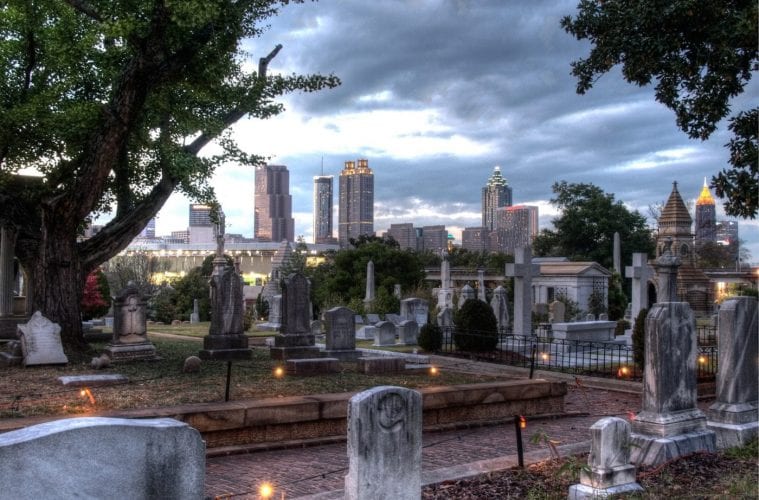 Nothing brings Sara Henderson more joy than watching kids laughing, playing and dashing through Atlanta’s oldest landmark in continuous use. In fact, the more rambunctious the child’s exuberance the merrier, according to Henderson, who also regards such scenarios as teachable moments for grownups.

“When I see mothers shushing their children or telling them not to run around on the grounds because they must be respectful, I explain that our residents have found it far too quiet for far too long and they‘re delighted to hear happy sounds again.”

Henderson, who is director of gardens at Oakland Cemetery, smiles at the memory as she strolls through on a glorious spring day.

Situated just five blocks east of the state Capitol Building, Oakland is an oasis of wall-to-wall birdsong, blooming heirloom flowers and dense tree canopies. Home to the oldest magnolia in Atlanta, the City Champion, the bucolic setting is so serene that it’s easy to imagine the vistas that greeted Victorians when the rural garden cemetery was founded in 1850 — barring the spectacular view of downtown due east, MARTA trains to the northwest and boxcars rumbling along the CSX tracks that border the northern quadrant of the grounds.

Such tragedies were not atypical 150 years ago, and though Victorians embraced the Greek concept of a cemetery as “a sleeping place,” (which is why pillows with tassels are a recurring motif), no euphemism alters the fact that our predecessors were adept at dealing with death. “The Victorians got mourning and death right,” says David Moore, executive director of Historic Oakland Cemetery Foundation. “They did not regard graveyards as scary, taboo places to be avoided. Instead, they cultivated park-like environments where families could tend a grave, walk their dog, stroll, court, enjoy a picnic and live!”

Oakland is on a mission to revive past notions of death, dying, remembrance and mourning though its series of 16 docent-led interpretive tours (about history, art, architecture and epitaphs), annual events like the Run Like Hell! road race and the upcoming Illumine: An Evening of Light and Art in the Gardens, which will be helmed by Cooper Sanchez. A professional garden designer, specializing in the rehabilitation of historic gardens, and visual artist, Cooper finds Oakland the perfect venue to combine his interests in fine art and horticultural aesthetic practices.

“No pun intended, but this place has great bones,” the Atlanta native marvels, when (literally) coaxed out of a tree long enough to talk about what visitors can expect from Illumine. “I haven’t seen another garden in the South that is so tailor-made for observation.”

Waist-high granite and marble walls serve to bring plant life up to eye level in many areas, while narrow brick-cobbled roads — originally intended for horse & buggy — bring all the trees and flowers close as pedestrians traverse the pathways. Also noteworthy, explains Sanchez, are the alternating patches of dense shade and full sun that gives pedestrians a diverse and constantly changing experience.

Illumine, a self-guided jaunt through the gardens, will kick off at the cemetery’s main gate at twilight on Saturday, April 16. Paths will be illuminated by more than 100 light boxes, designed and constructed by Sanchez, half of which are works of art. Backlit molds use pressed plants, beeswax, cyanotype prints, drawings, and glass to reflect the architecture, botanicals, and history of Oakland.

The tour will culminate at the recently erected Beaumont Allen Greenhouse, which will serve as a pop-up gallery featuring works from Macon-based painter Charles Ladson, interior designer Elizabeth Ingram and filmmaker Steve Bransford. Performances from The Shoal Creek Stranglers round out the evening.

Placed on the National Register of Historic Places in 1976, Oakland’s 48 acres, a subsection of which has been restored by the Foundation, feature treasures like 55 elaborate mausoleums (some of which boast stained glass windows from Tiffany Studios), soaring sculptures (four of which are listed with the Smithsonian) and headstones with effusive inscriptions that reflect an age when the bereaved found consolation in extravagant expression.

Impressive art and architecture can be seen in Victorian, Greek Revival, Gothic, Neo-classical, Egyptian and Exotic Revival styles. Walls, fountains and ornate iron fences add grace to the gardens. Botanical symbolism abounds, from weeping rosemary (remembrance) and weeping Japanese maples (sorrow), to fastigiate trees and obelisks (pointing the way to heaven), to the Victorian Language of Flowers (daisy: innocence or hope, fern: dreaming of you, moss: maternal affection). An arboretum, Audubon wildlife sanctuary and botanical garden, Oakland has even served as a backdrop for weddings.

The final resting place of Tweet the mockingbird (d. 1974), one of several family pets buried on the grounds, the outdoor history museum testifies to the quirks and eccentricities of Atlantans. While plots that segregate African Americans from whites and Jews from Christians harken back to a legacy most people would rather forget.

In spite of such inclinations, Neale Nickels, director of preservation, stresses that remembering the stories of our past is not only essential, but a point of pride at Oakland.

“Most historic cemeteries do a great job with tours and talking about the people who are buried there, but we’re unique in that we talk about the cemetery holistically — sort of as a cultural landscape.”

Moore agrees, adding, “You die three deaths: first, when your body dies; second, when your body is placed in the ground; and third, when your name is no longer spoken on this earth. We try to prevent that third death from occurring to our residents by telling their stories — whether famous or infamous — remembering who they were, what they did and that they were part of a society in an era in which this city evolved.”