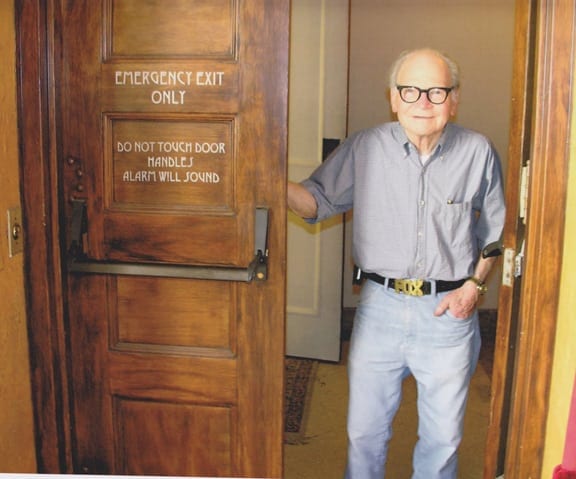 When the Fox Theatre announced the death of Joe Patten via Facebook last week, one of the first people to respond on the social media platform was Mark Cash.

“In 1974 when I learned the Fox [Theatre] was going to be demolished, my family and I drove downtown to see it one last time,” recalled Cash. “We stood at the door and peered into the dark and abandoned structure. After a while a little man appeared and asked if we would like to come in.”

The little man was Joe Patten.

Standing just over five-and-a-half feet tall, he had a severe stoop caused by several spinal fusions that left him even shorter. He also grappled with painful spinal issues, says Rick Flinn, who was restoration director the Fox from 1976 to 1992. “But all those years of climbing ladders and endless stairs in the Fox served him well and kept him in remarkably good shape.” Patten outside his beloved theater, where he also lived for over 35 years.

Though small in stature, Patten, who was born in Lakeland, Florida on February 9, 1927, cast a very long shadow as a champion of historic preservation and the Phantom of the Fox.

Rodney Cook, Jr., CEO of the National Monuments Foundation, believes Patten embraced the Marvel Comics-style moniker “amusedly” — neither encouraging nor discouraging the legend. “Joe was a very low-key, quiet person,” says Cook, who (as a 15 year old) took part in the “Save the Fox” campaign that was spearheaded by Patten in the early 1970s. “He was a beautiful host, consummate gentleman and very generous. He could get from one end of the place to the other in minutes, which is how he earned his nickname.”

During World War II, Patten served as a hospital corpsman in the Navy. The opportunity allowed him to travel the country and indulge his childhood fascination with theaters and pipe organs.

He first laid eyes on the the Fox in 1946 and was instantly smitten. “It was the most interesting and finest theater I had ever been in,” he recalled in a 2008 interview with Don Rooney, curator of urban and regional history at the Atlanta History Center.

Though Patten had seen the Paramount Theatre and Radio City Music Hall in New York prior to visiting the Fox, he felt nothing compared to the building’s magnificent brick masonry and copper finishes on her exterior, nor her well-designed interior and atmospheric ceiling that created the appearance of looking up between two palaces at night — with drifting clouds and twinkling stars in an indigo sky.

The theater was one of only five large Fox theaters constructed nationwide, and only two others are still standing — in Detroit and St. Louis. The Atlanta Fox was built in a Moorish style by the Ancient Arabic Order of the Nobles of the Mystic Shrine and was the home away from home for the New York Metropolitan Opera from 1948 to 1968, a premiere venue for live entertainment and the most sumptuous setting imaginable for a day at the movies.

As Patten used to say, “When you walk into the Fox Theatre and purchase your ticket … you get your money’s worth before the curtain ever goes up.” Patten first visited the theater in 1946.

The advent of shopping malls and multiplexes, however, led to the deterioration of in-town movie audiences and threatened grand, old theaters, which were being demolished to make way for office towers. The writing was on the wall when Southern Bell (later BellSouth and AT&T) purchased the Fox in 1974 with plans to tear it down within eight hours of signing the deal — the company wanted to use the property as parking for a new office building on West Peachtree Street.

But losing the Fox was untenable to Patten, who’d talked the theater’s management into letting him recondition the giant Möller pipe organ for free in 1963 if they provided the materials. After restoring Mighty Mo in nine months, he worked as a stage-right electrician for five years before becoming the theater’s technical director in 1974. That same year, he formed Atlanta Landmarks, Inc. as a nonprofit to save the Fox (at one point a wrecking ball and crane was in place to tear it down). Atlanta Landmarks bought the theater in June 1975, and continues to operate it today.

Patten was then asked to move into the building to keep an eye on the old theater. He signed a lease for a rent-free 3,640-square-foot apartment within the Fox — originally an old office for the Shriners — which he could occupy for the rest of his life. He lived there more than 35 years, surrounded by his family’s antiques (including a grand player piano), and summed up the privilege as “an absolute delight.”

Precise and meticulous by nature, Patten knew every aspect of the theater’s mechanical functioning — from plumbing to wiring to the stage. He also had a passion for antique cars, says Flinn. “Joe bought and restored old Rolls Royces, Cadillacs, Mercedes’ that won international awards for the quality of their restoration. And he brought that same attention to detail and insistence upon doing things right to his work at the Fox.”

Highlights in Patten’s lifetime included watching coloratura soprano Dame Joan Sutherland take three or four curtain calls from backstage; overseeing production of the first on-the-road show for Phantom of the Opera and celebrating the 50th anniversary of the premiere of Gone With the Wind. Patten with “Mighty Mo,” the house organ that he restored.

But his claim to worldwide fame came in the pre-dawn hours of April 15, 1996 when he alerted the Station 11 firehouse after discovering an attic fire in the southeast corner of the Fox. “I jumped out of bed, ran downstairs with my bathrobe on, [my] blue bathrobe, which was seen throughout the world on CNN,” he recounted in his interview with Rooney.

According to Cook, Patten should be remembered not only for saving the Fox twice, but for his foresight as a visionary.

“Can you imagine the intersection of Peachtree [Street] and Ponce [de Leon Avenue] without the Fox?,” he asks rhetorically. “There would be a lot of parking lots instead of those great apartment buildings and hotels in what is one of the most attractive districts in the city today.”

Even more horrifying, suggests Marie Nygren, who remembers seeing “this short, little man with glasses and a million keys dangling from his belt,” dine at her mother’s restaurant Mary Mac’s Tea Room everyday as a child in the ’60s, “Can you imagine The Nutcracker anywhere else?”