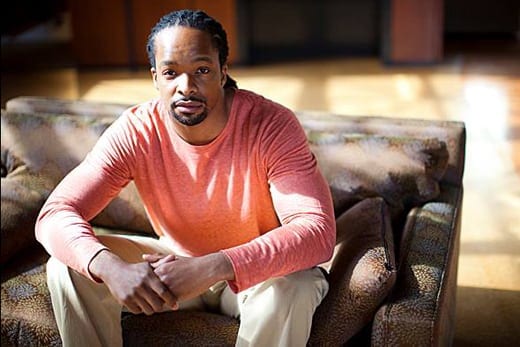 Emory College of Arts and Sciences associate professor Jericho Brown was awarded a 2016 Guggenheim Fellowship. “It means the world to me that there is some recognition from the outside world, to let Natasha Trethewey and Walter Kalaidjian know they were right to bring me to Emory University,” stated Brown. “It’s always nice to know when I am writing a poem, the lights won’t go out on me.”

Brown was hired as an associate professor by the former U.S. Poet Laureate and English Department chairman in 2012. Since then, Brown has earned both the Anisfield-Wolf Book Award for his poetry collection The New Testament, a Whiting Writers Award and been the recipient of fellowships from the Radcliffe Institute at Harvard University and the National Endowment for the Arts. His poems have appeared in publications including The Nation, The New Republic, The New Yorker and Best American Poetry. His poem “Bullet Points,” a reflection on police brutality and the African American experience, went viral after it was published by Buzzfeed in late March.

This most recent accolade will allow Brown to work on a new book, Character, a collection of poems focusing on society’s obsession with celebrity, written from the perspectives of personalities from literature, the visual arts and film. “I am working to have my poetry informed by other types of art,” Brown says. “It’s good to have this award come my way, because it reminds me that, yes, this work matters and I am what I say I am. I’m a poet, and poetry makes a difference in the world.”

“We knew even before his arrival at Emory in 2012 that Jericho was an enormously important and powerful poet,” says Robin Forman, dean of Emory College of Arts and Sciences. “The Guggenheim Fellowship highlights the impact he has had on our already remarkable creative writing community with his infectious intensity and creative energy.” Brown, a Louisiana native, holds a PhD in poetry from the University of Houston, an MFA from the University of New Orleans and a BA from Dillard University.