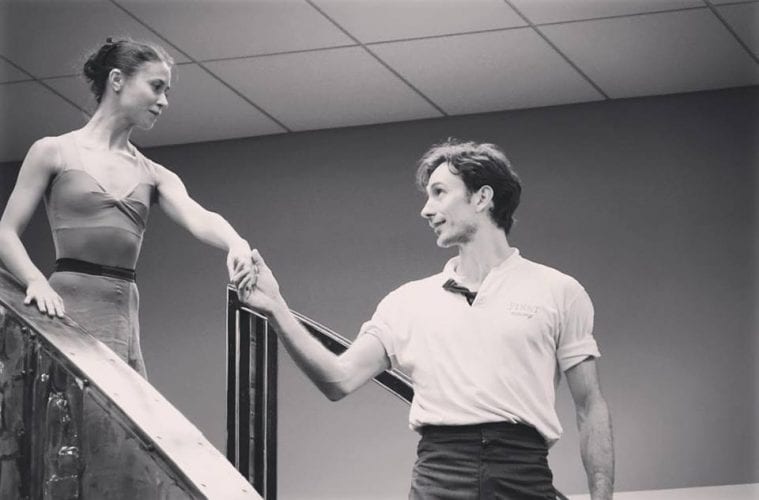 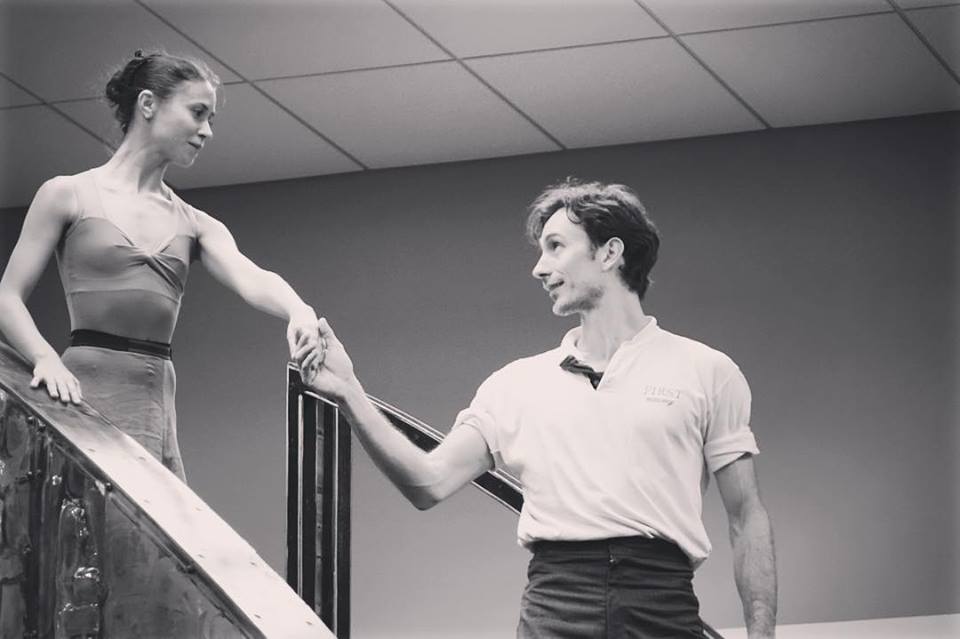 Mara and Clark in rehearsals for Moulin Rouge. (Photo by Brian Wallenberg)

When Atlanta Ballet first staged the Royal Winnipeg Ballet extravaganza Moulin Rouge — The Ballet in 2010, Christian Clark and Nadia Mara played the lead roles of Nathalie and Matthew. Except Clark danced in the “B” cast and Mara, then 21 and in just her third year with the company, danced in the “C” cast, essentially as the understudy.

As the ballet prepares to re-stage Moulin Rouge February 5-13 at the Cobb Energy Performing Arts Centre, much has changed. Canadian choreographer Jorden Morris has tweaked the popular story ballet since it was last performed here. Clark is now a Moulin Rouge veteran, having toured extensively with the Royal Winnipeg Ballet, the troupe that commissioned the piece. And while he and Mara are performing Nathalie and Matthew again, this time they are dancing the characters together in the “A” cast.

The crowd-pleasing ballet — which revolves around a love triangle set in 1890s Paris at the venerable nightclub Moulin Rouge where the can-can was popularized — has been performed in front of over 100,000 people across North America. It has toured in Europe and has even been made into a film. 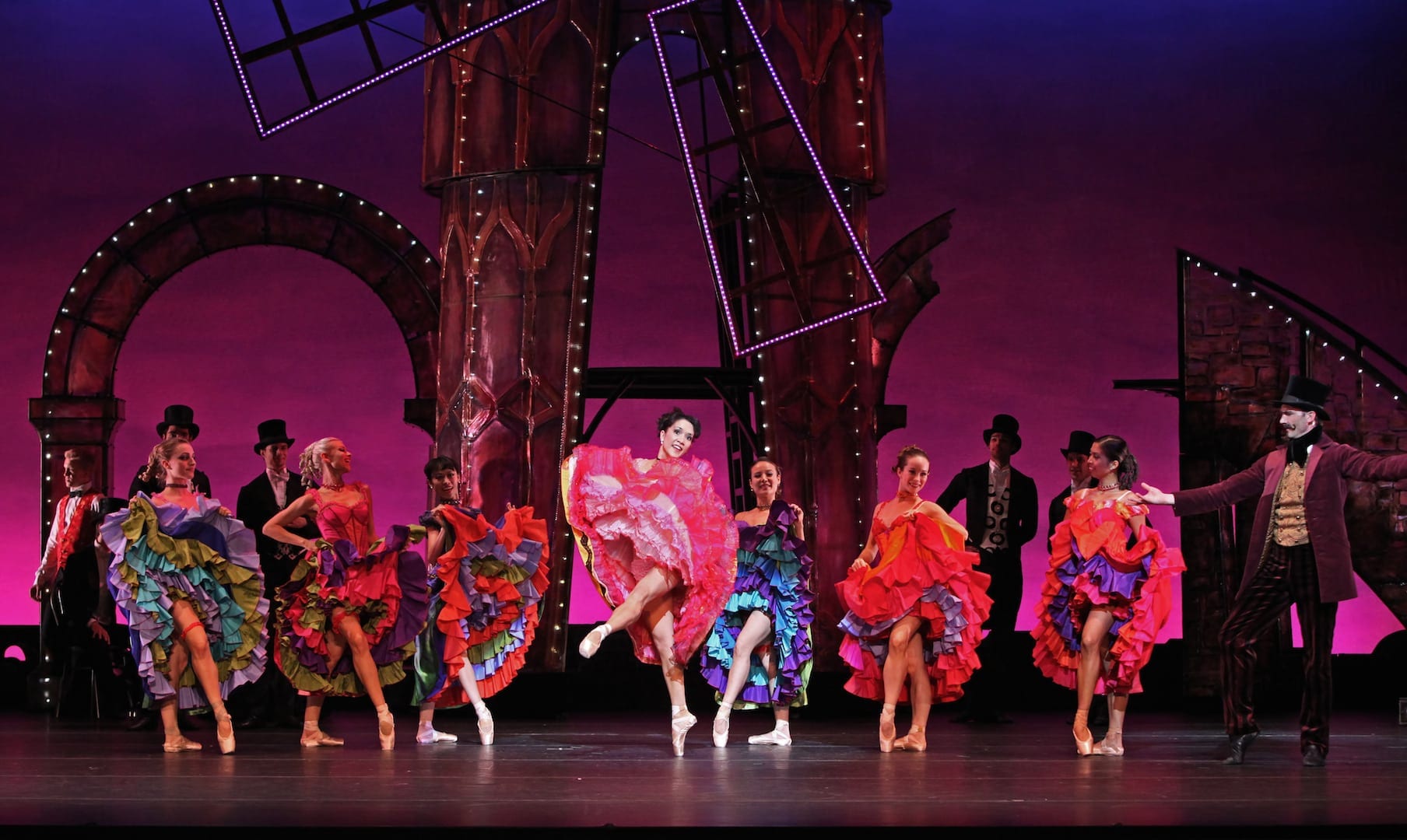 As they prepared for opening night last week, Clark and Mara sat down with ArtsATL for a conversation that touched on the importance of having the right dance partner, their love for story ballets and the backstage perils of strenuous dance pieces.

ArtsATL: Opening night for Moulin Rouge is a week away as we speak, and the two of you are playing the leads. How are you feeling about the show?

Nadia Mara: I’m so excited. I even told my dad and my brother and my aunts to come (from Uruguay) to see it. I have such a great time doing this part. It’s very special. Christian has done it way more than me.

Christian Clark: After we did it in 2010, Royal Winnipeg was short a principal guy, I think two of their guys were retiring,

I got a call from Jorden Morris and he said, “Hey, I really liked the way you played Matthew. We’re going on tour and it’d be great if you could come and do the show.” So I did a couple of tours with them, we went all around Canada for several weeks. Then I got another call: “We’re touring the U.S., can you join us for that one?” So I did that tour. A year after that, Jorden called again and said, “We’re going to do a film version of the ballet, can you come?”

They got mad because I sweat a lot when I dance. They said, “You’re sweating. That’s all we’re seeing with the camera, all that sweat.” The make-up people were backstage between scenes fanning me off. And the guys in the company were giving me a hard time: “Oh, talk about a princess.” (laughs) People would walk by and roll their eyes. 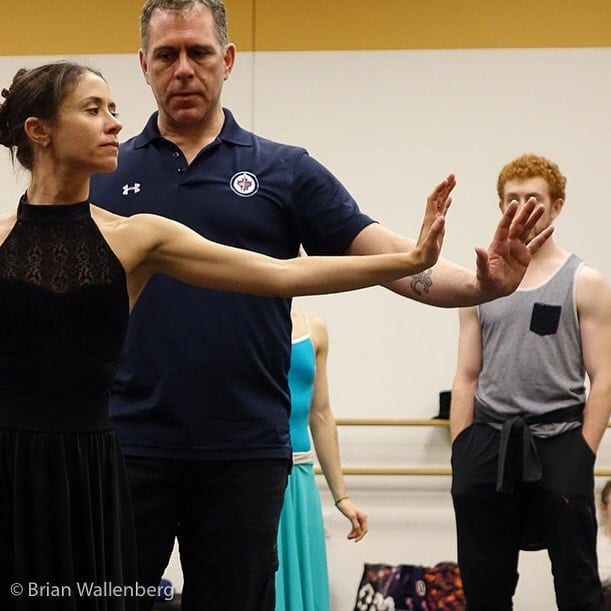 So I’ve done a lot of shows for Moulin Rouge. They tour it all the time and perform it every year; it’s one of their highest-selling ballets. I love the ballet. It’s so exciting. It takes you back in time. The music selection …

Mara: It works really well with the storytelling. The section I really love is the tango section because I just feel it in my blood. There’s a section with Astor Piazzolla’s “Libertango.” I remember listening to that on the radio when I was really little. I’ve seen many people dancing to that. I remember the first time we learned it, I said, “Is that part of the ballet?” I was so excited to do that part. All the music fits really well.

Clark: Jorden spent a lot of time mapping this whole ballet out. It’s great to revisit a role. You’re more familiar with the technical aspects and you can focus more on the artistry. I’m so happy to be doing the ballet again.

ArtsATL: You’re each playing the same part that you played when Atlanta Ballet performed the piece in 2010.

Clark: This is the first time we’ve done it together; last time, we were in different casts.

Mara: I’m really glad I’m doing this with Christian because I feel really comfortable dancing with him. He’s one of the people where I can just be free on stage and know that he’ll be there for me. I can be more focused on telling the story and engage with the audience.

Clark: We have good chemistry.

Clark: It’s a good partnership. It’s give and take. 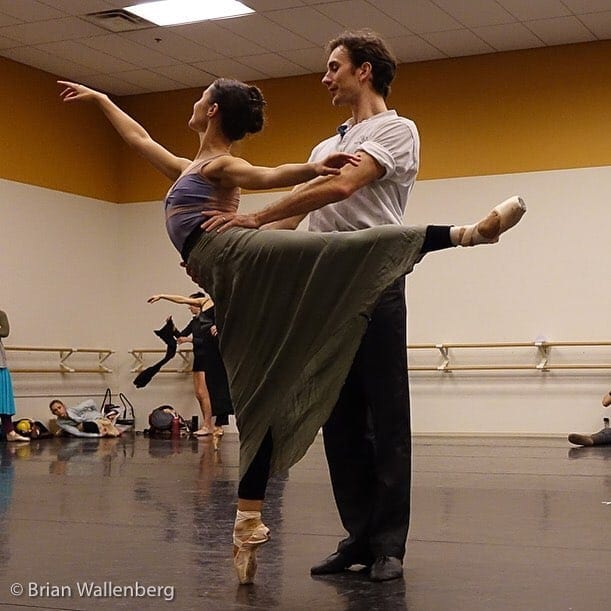 Clark and Mara say they have a deep comfort level with one another. (Photo by Brian Wallenberg)

Mara: We’re easy on each other. We don’t get mad or angry in the studio. If something happens, it happens. We’ll be fine, we’ll fix it. A sense of humor is huge. Even on bad days, having a sense of humor helps.

Clark: And we’ve worked together in the past, so it’s nice to be able to do that again. It’s nice to work with someone you’re comfortable with.

ArtsATL: You partnered in Camino Real last year, and you danced together in Four Seasons and Seven Sonatas.

Mara: That one, Seven Sonatas, was hard. Poor Christian. At the end, I was just trying to give him some energy with my eyes.

ArtsATL: Didn’t they have“barf buckets” backstage because the piece was so strenuous?

Clark: Yes. We did the dress rehearsal and I had to stop. I was dry-heaving. I was so fatigued and tired, we stopped in the middle. That’s the first time it’s ever happened with me in dress rehearsal, to have to stop like that.

Mara: And I thought, oh, that’s not sexy at all; don’t even look at me right now (laughs). I like it when you can do romantic parts and storytelling with someone you have chemistry with. We’re good friends, too, and it’s fun. It feels different this time for me. I have a different partner. The story’s the same, but the details are a little different. So it feels like a new ballet to us. It’s a challenge.

ArtsATL: The staging for this show looks incredibly elaborate, particularly the costumes.

Clark: It really takes you back in time. You feel like you’re really there: the sets, the music, the costumes. 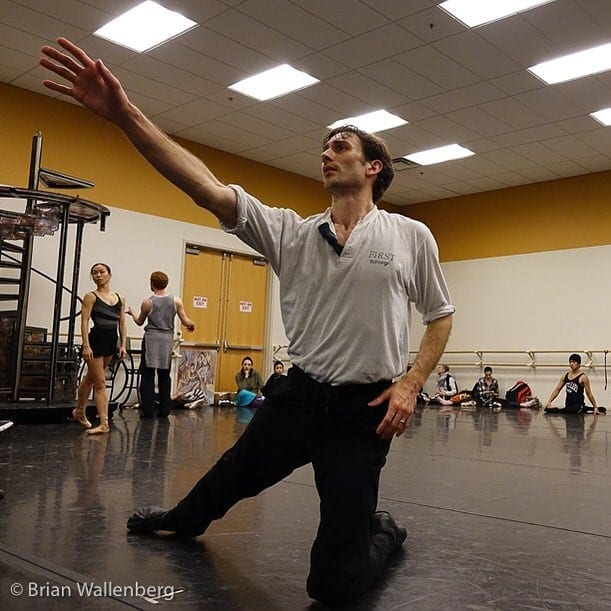 Clark has toured with the Royal Winnipeg Ballet’s version of Moulin Rouge. (Photo by Brian Wallenberg)

Clark: I had dinner at Jorden’s house in Canada and he showed me his storyboards. It was how he put the ballet together. It took him years, scene by scene. You could see all the hard work he’d poured into it. Jorden also had to get approval from Moulin Rouge. They had to approve everything: music, sets, costumes.

Mara: Pictures, too. They have to approve any pictures from the shows.

Clark: Even pictures from working in the studio; we can’t post them online without getting their approval.

Clark: That’s mine, too.

Mara: I like all the romantic scenes; they’re fun to do. And the end is very dramatic, and very touching. It’s great for the audience to see something like this, even if you’ve never seen a ballet. It’s like a movie, very entertaining and there’s a lot going on.

Clark: It’s a crowd-pleaser, and it’s really fun for the dancers, too. And those two don’t always go hand in hand.

ArtsATL: How tough is it to pick a role back up six years later? Did you remember any of your parts?

Mara: I remembered the feeling of the story; I remember being really upset at the end, and being really tired because the whole ballet is a lot. Of course, after five or six years I’m not going to remember the choreography exactly, but you remember feelings like the pas de deux. I remember hearing that song on the radio and going, “Remember that?” It was so beautiful and your heart beats a little faster.

Clark: For me, it’s a lot like the Nutcracker because I’ve done so many shows, it’s kind of in the body. There are scenes that Jorden added more recently that are not so comfortable. It’s a challenge to do a ballet again because you want it to be better than it was before. You don’t want it to be the same, that wouldn’t be fun for anyone.