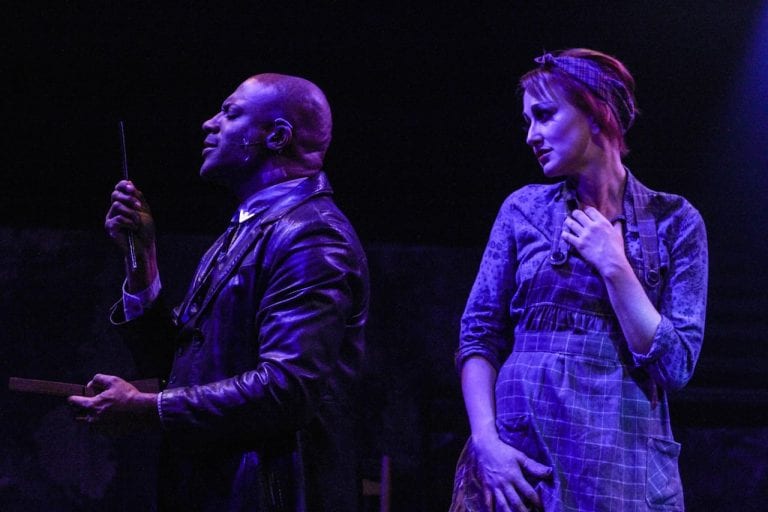 Review: “Sweeney Todd” has its basic flaws, but also plenty of Sondheim moments to enjoy

“He seldom laughed, but he often smiled,” is just one of the ways that the chorus describes the murderously obsessive lead character in Stephen Sondheim’s 1979 musical Sweeney Todd: The Demon Barber of Fleet Street. The line seems especially apt in describing the role as played by Kevin Harry in a competent, if flawed, production at Actor’s Express through February 28.

As Sweeney, Harry — who memorably took lead roles in recent Actor’s Express productions including RENT and Murder Ballad — can seethe with terrifying rage at one moment, and in the next, he can suppress it all and hide behind a creepily pleasant barber’s smile. It’s just one estimable aspect of a performance in which there’s lots to admire.

Still, Sweeney Todd is one of those shows, and Sondheim is one of those composers. Fans will be hard to please no matter what, and as a fan, I have my share of nitpicking to do.

The largest problem here is a lack of balance between intimacy and distance. The clever setup of the small blackbox space places the audience on two sides of Shannon Robert’s deliciously spooky set. Even in the back row, one feels close to the action. It’s theatrical intimacy at its best.

But the singers are miked, and the primary instrumentation comes from a synthesizer, giving the show a distant, processed, almost prerecorded sound and feel. Though the amplified sound is top-notch, the words themselves could become indistinct, and I often lost lyrics — particularly during fast choral sections — probably because the lyrics were being sung so nearby and also broadcast through speakers, sounds that can never be perfectly simultaneous or seamless.

I’d be curious to experience the production un-miked and to hear the score on more non-electronic instruments. I suspect I’d be more pleased.

Harry has a fine bass-baritone, which is what the role calls for, but surprisingly, he actually sounds at his best in the rare moments when the part enters the tenor range, even the high tenor range. As a bass-baritone, the actor adopts a more self-consciously crafted, rounded tone; it’s certainly not unpleasant or unfitting, but it seems less interesting, spontaneous and natural than when his voice sounds the higher notes.

She successfully and often hilariously conveys the character’s transition from frazzled shop matron to focused pragmatist, but there doesn’t seem a lot that’s inventive or new about her interpretation. Though the character herself is outlandish and funny, and Bowman handles such moments adeptly, there’s something that’s too by-the-book and workmanlike about the performance. (Bowman’s Act II costume by Erik Teague is stylish and inventive, however, and it helps give the characterization more individuality).

The cast and ensemble are strong overall. Benjamin Davis’ Anthony sounds sweet, romantic and heroic when singing his beloved Johanna’s name, a nice connecting thread in the narrative, and Stuart Schleuse’s Pirelli oozes the right combo of oil and conniving.

Kelly Chapin Martin as Johanna encountered some pitch problems on the night I saw the production, a tough road-bump to hit in the role because the character sings so often about the act of singing. I also wondered if she was miscast as the dull-as-dishwater, waiting-to-be-rescued Johanna; Martin would seemingly be a better fit for roles with more humor, spunk and personality. And inexplicably, the judge praises Johanna twice for the way she looks in her “light muslin gown,” and the actress is wearing a sweater and a skirt that look as heavy as a fire curtain.

Joseph Masson is an incredibly talented youngster, but he’s too young for the role of Toby. On stage, that part has often been played by a teenager or a boyish man in his 20s, which makes the character seem simple-minded and naive rather than purely innocent.

Songs like “Not While I’m Around” lose their edge, and Toby’s quickly developing dependence on Mrs. Lovett becomes cutesy and Disney rather than dark and Dickensian. And in the end, it’s tough to buy that the little charmer has turned into a gin-addled throat-slasher, while a more adult Toby always seems somewhat brainsick from the start.

Still, in spite of its imperfections and disappointments, the production is appropriately dark and spooky and not without its impressive accomplishments. Sweeney fans will be hard to please no matter what, but those encountering the show for the first time will doubtless find plenty to enjoy.