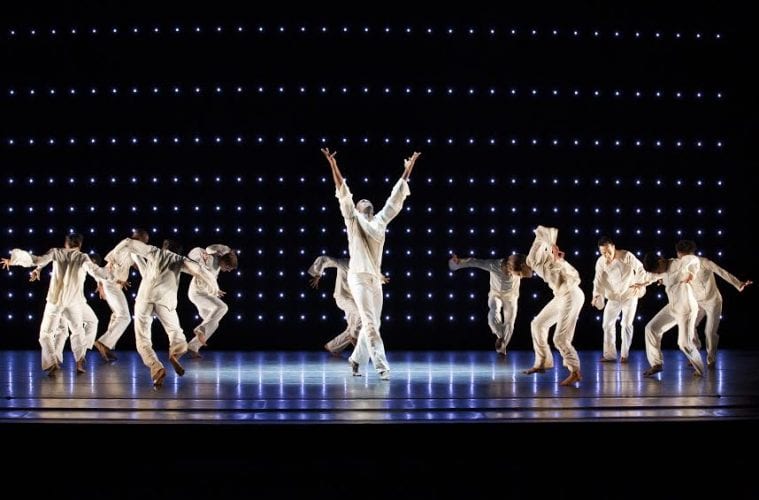 It’s almost impossible to think of the Alvin Ailey American Dance Theater and not think Revelations. It’s the finale on every mixed bill the company performs.

So yes, of course, Revelations will be performed every night during the company’s annual visit to the Fox Theatre February 10-14. Also included this season is a revival of Cry, the iconic 1971 solo that Ailey created for his muse, Judith Jamison. It hasn’t been seen in Atlanta in its entirety since 2006.

These are the old favorites that Ailey fans love. But over the last five years artistic director Robert Battle has freshened the repertory with bracing, contemporary works by dance makers you wouldn’t automatically associate with the company: Britain’s Wayne McGregor for instance, with his stark, angular, extended-to-the-max style. Battle’s choices have made audiences and critics alike see the company in a new light. Battle says choreographing the new piece brought him closer to his dancers.

So it seems appropriate that Battle’s most recent choreography, the first work he’s created for the company since taking the leadership reins in 2011, is titled Awakening. It will have its Atlanta premiere on February 11.

“The work is very personal to me,” he said in a phone interview. “It’s about a certain calling. It’s about (a person) coming out of the sacred womb of the community to move it forward.”

In that way, it’s slightly autobiographical; it features the towering Jamar Roberts as a leader-like figure, emerging from and moving with more than a dozen members of the company. Set to a rhythmic score by composer John Mackey, Awakening employs a modern dance vocabulary inspired by the robust, grounded style of Paul Taylor.

Battle admits he was nervous about creating a new piece for the company but felt immediately at home when he began rehearsals. “Being in the studio with the dancers choreographing, as opposed to seeing them work with other choreographers, was wonderful,” he said. “That really is what we all yearn for — that process of creativity together.”

For Battle, it was a necessary next step as director. “It was about solidifying my relationship with the dancers,” Battle said. “It deepened the relationship in a non-verbal way. It was like a big hug.”

The title of the piece carries many meanings for him, starting with the awakening he says he experienced as a child in church, listening to a presiding elder’s sermon. It’s a time in his life he talks about often. “I was in tears,” he said. “I don’t remember what he said, I just remember how it made me feel. That was an awakening. [The kind] that never leaves you and informs the rest of your life.”

He felt it again when he first saw Revelations performed by the company in his native Florida. “That awakening then worked its way into my bloodstream,” he said. “That’s the reason I am sitting in this position, standing in this position today. I believe that so much.”

Awakening is also what Battle described as an affirmation of light. “There’s light and then there’s dark again,” he said. “But because you’ve seen, quote unquote, the light, you are forever changed. That’s been in my subconscious but I have never given voice to it.” He sees a parallel in the movie Contact, where the Jodi Foster character “makes contact in that other plane, and then the portal closes but she will never be the same again.” To help make these ideas visual, Al Crawford’s lighting design includes a horizontal strip of white light on the back wall that expands and later contracts.

Battle still seems awed by his role as artistic director and the responsibility it carries. When he accepted Ailey’s posthumous Medal of Freedom from President Obama at the White House in November 2014, he felt the weight and legacy not only of Ailey but also the many African-Americans who preceded him. “I thought about them, and about everything that must weigh on [Obama] as he stands on the shoulders of people like Dr. Martin Luther King, Jr. and others,” Battle said. “I felt it. It was an awakening of things that have been on my mind and in my heart.”

Rounding our the six mixed bills in Atlanta are Taylor’s tango-inspired Piazzolla Caldera; Exodus from hip-hop choreographer Rennie Harris, set to gospel and house music; Open Door, Ronald K. Brown’s Afro-Cuban celebration; and Battle’s No Longer Silent, created in 2007 for The Juilliard School. All but Piazzolla Caldera are Atlanta premieres.

Battle’s last words in the interview, however, are about Revelations. “We close with it every performance so people can see the umbrella held high,” he said, referring to the large white umbrella one dancer holds in the “Wade in the Water” section. “Sometimes people will say, ‘I’m going to see the umbrella,’” he said with a laugh. “So come and see the umbrella.”