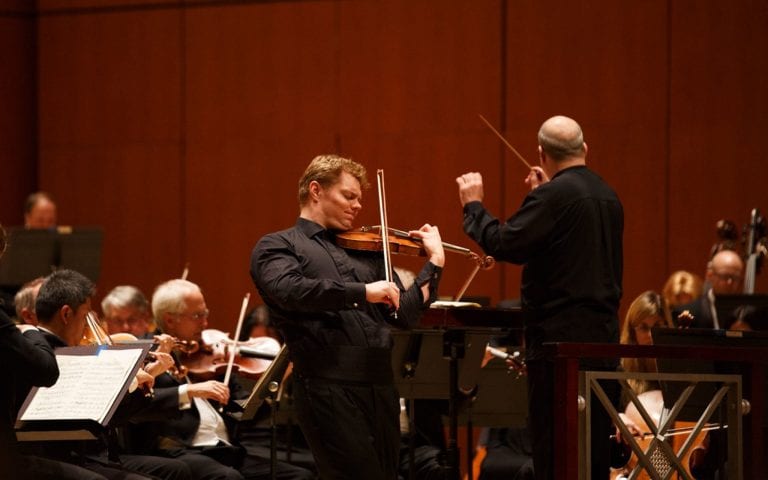 Review: With Spano at the helm, ASO debuts new Michael Kurth piece and honors two of its own

The concert opened with an unlisted work, the famous “Air” from J.S. Bach’s Suite No. 3 in D major, BWV 1068, performed in memory of the orchestra’s longtime principal piccolo and flute player, Carl David Hall, who died on Tuesday following a long and courageous struggle against cancer. The piece set a appropriately introspective, meditative mood that was followed by a moment of silence.

The concert then proceeded with the Violin Concerto in D major, Op. 77, by Johannes Brahms, performed by ASO concertmaster David Coucheron.

Coucheron joined the ASO as concertmaster in 2010, just as he was reaching his 25th birthday, making him the youngest concertmaster of any major symphony orchestra at the time. In the interim, he has been soloist with ASO in violin concertos by composers such as Mozart, Bruch, Sibelius and Mendelssohn, as well as Ralph Vaughan Williams’ pastoral romance “The Lark Ascending,” which he recorded with the ASO and Spano for ASO Media.

Now at age 30, Coucheron performed the Brahms Violin Concerto for the first time in this week’s concerts.

Although Coucheron is best known for his signature sweet lyrical capacities, the Brahms concerto afforded display of his more robust side aplenty. Its formidable technical demands, with extensive multi-stops and rapid passages — not to mention its 40-minute length — make playing the piece a physical as well as musical challenge.

The conception is symphonic, because solo and orchestra frequently meld into a unified texture as often as they are set in contrast. Coucheron brought forth an impressive performance, the first movement’s cadenza being among the high points. It was well-underscored by Spano and the ASO.

Coucheron returned to the stage for a beautifully played encore, the opening “Adagio” from J.S. Bach’s unaccompanied Sonata No. 1 in G minor, BWV 1001.

At 71 years of performing with the ASO, Little topped the previous world record of 70 years held by Frances Darger, a violinist with the Utah Symphony from 1942 to 2012. Little was a charter member of the original Atlanta Youth Symphony Orchestra, the precursor of the Atlanta Symphony Orchestra, and played her first concert on February 4, 1945.

The second half kicked off with the world premiere of “A Thousand Words” by Michael Kurth. A member of the ASO’s bass section, this is Kurth’s third commissioned composition for the ASO, preceded by the three-minute fanfare “May Cause Dizziness” (2011) and the graffiti-inspired “Everything Lasts Forever” (2013).

Kurth says he named it “A Thousand Words” because it would take that many words to describe the piece adequately. But the truth be told, Kurth is also a very verbal individual who is quite skilled at wordplay, where he shows wit and imagination, as well as metaphorical insight.

The titles and subtitles for his movements, in this instance, fall into the latter category. “Above: Radiance” is a portrait of a slow, shimmering sunrise, essentially a long crescendo into light. “Beneath: My Sinister Groove Machine” brings forth interesting, complex rhythmic patterns that hint at Latin and popular origins.

“Within” — which escaped subtitling — is a lyrical essay that grows fragility into joyous strength. The final movement, “Beyond: We Will Puncture the Canopy of Night,” was inspired by birds in flight and something city-dwellers no longer have: the vast array of stars seen in the night sky that can be seen where there is little human-generated light pollution. The final movement picks up again on the rhythmic vitality of the second, merged with melodious elements of the third, ending in what the composer aptly describes as “a joyful Carnival parade.”

The concert concluded with Richard Strauss’ tone poem “Till Eulenspiegel’s Merry Pranks,” Opus 28, which portrays the German folk hero’s misadventures. Although Till’s pranks expose greed, hypocrisy and folly, the rogue is finally captured by authorities in the end, sentenced to death and executed by hanging.

Eulenspiegel is represented in Strauss’ colorful music by two themes — a lilting, somewhat noble one played by principal horn Brice Andrus that concludes with a long downward arpeggio — and the other, representing the trickster side of Till, played by principal clarinetist Laura Ardan.

The piece is popular with audiences and was skillfully played on this occasion by Spano and the ASO. It made an excellent choice to follow Kurth’s music, tying the program’s second half together well.