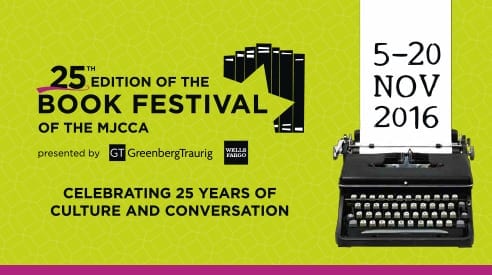 Laura Relyea·October 31, 2016
AuthorsBooksPreviews
If you enjoy this story, or the other stories you read on ArtsATL, we encourage you to donate to our annual fund. By investing in ArtsATL, you are investing in the arts in Atlanta.

It’s hard to believe how far the festival has progressed from its humble beginnings. “Twenty-five years ago, the book festival was just six authors over five days,” says co-chair Dee Kline during our phone interview. “Last year 13,000 people attended our events and we’re expecting at least that many this year,” she says, adding that when Judy Blume appeared at the festival last year over 600 people attended.

Curating a collection of authors that can attract such an assemblage is no small task, says Kline and Pam Morton, the festival’s director. In addition to accruing local talent and authors pertinent to the immediate community, the Marcus Center works through the Jewish Book Council Network in New York to assemble a list of authors to feature. This process involves listening to over 250 authors in two days. “We then work to cull that down,” says Morton. “We really want authors who are also excellent presenters.” Of course, that list of talent isn’t limited to just big names. Journalists, activists, politicians, literary authors and emerging authors will all be representing their work throughout the 15-day celebration.

The focus on presentation and performance has led to the festival bringing in talent that might be a bit outside the box of what one would expect from a literary festival, for instance, this year’s opening night presenter, Kenny Loggins. The famed singer-songwriter has transformed his most lauded tune, “Footloose” into a children’s book and accompanying soundtrack of the same name, released mid-October. He’ll be opening this year’s festival on Saturday with an author talk and performance of songs composed for the book.

Israeli peace activist, journalist and author Yael Dayan will join CNN’s Nadia Bilchik in a discussion of Dayan’s most recent book, Transitions, on the second day of the festival. The book takes an honest look back at the public figure’s family history and political career as she makes her transition from playing a prominent role in politics to more behind-the-scenes participation.

Heralded author of Extremely Loud & Incredibly Close and Everything is Illuminated, Jonathan Safran Foer will discuss his first novel in 11 years, Here I Am, on Wednesday, November 9. Also appearing will be novelist Alice Hoffman, best known for her 1995 novel Practical Magic. Her most recent book, Faithful, is the emotional tale of Shelby Richmond, a young woman who survives a tragedy and overcomes her own burden of guilt.

The myriad of readings, book signings, panel discussions, author meet-and-greets and children’s storytelling that will take place throughout November couldn’t happen without support and participation from the community itself. “This festival is a labor of love,” remarks Morton. “It’s a lot of work. For me, this is my job. I’m amazed at the time and effort that our volunteers put into this festival.” Over 65 volunteers will participate in this year’s festival and more than 20 different journalists, book club hosts, teachers and professors will act as moderators and interviewers at the various events.

Book Festival of the Marcus Jewish Community Center of Atlanta, through November 20. Events held at the center, Zaban Park, 5342 Tilly Mill Road, Dunwoody. For a festival calendar, visit atlantajcc.org. Tickets may be ordered online or by calling 678-812-4005.