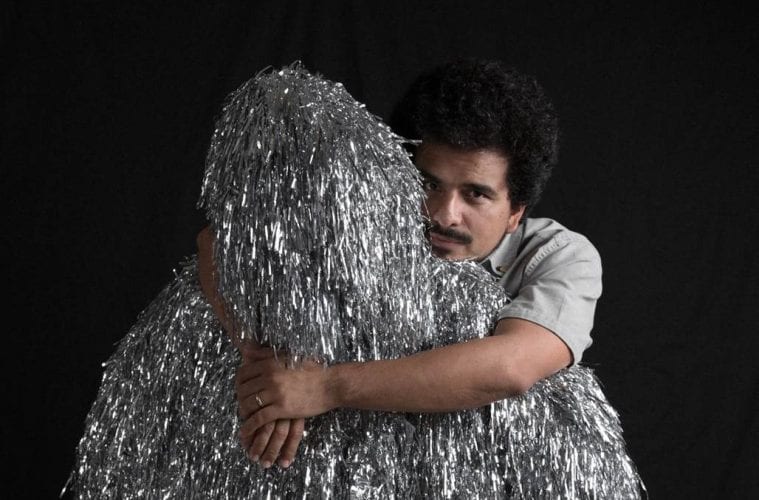 “I’m on the street walking around, I gotta buy some stuff, I leave for tour tomorrow,” said Roberto Carlos Lange aka Helado Negro during our phone interview. I never did ask what it was that he was buying. The Ecuadorean-American artist’s new album, Private Energy, had been released that morning. He was hitting the road for a month-long cross-country tour the next day.

Socks, I bet he was buying socks. You always need socks on tour.

It only took two songs to convince me Helado Negro was a new favorite musician of mine. It was 2011, and his sophomore album, Canta Lechuza, had just come out. A mutual friend recommended it, so I picked up a copy along with his 2009 debut, Awe Owe. At that time, I’d been living in the United States for a little over a decade, and listening to his music was the first time since leaving El Salvador that I’d heard something in Spanish that really grabbed me. I played both CDs for everyone I could — even my grandmother. (She liked it too.)

Helado Negro’s music doesn’t just stand out because it’s in Spanish. His signature chill vibes and incorporation of Latin instrumentation, like the marimba, and ambient sounds such as birds chirping, truly evoke the spirit of rural South America. Listening creates an atmosphere that you might find sitting outside in rural South America, drinking coffee in the afternoon — just closing your eyes makes you feel like you’re there. The only upsetting part is not knowing how to make that your ringtone.

Since his debut, Helado Negro has put out new music almost every year. His most recent release, Private Energy, is getting some much-deserved attention. News outlets, including NPR, CNN and Rolling Stone are taking notice, hailing it as, “. . . a singular vision that mixes esoteric observations on life with heavy keyboard pastiche,” and even a modern-day Pet Sounds.

The record itself may officially be the most accessible, with half of the songs being in English — but it also has some of the most powerful and important songs: “Young, Latin and Proud” and “It’s My Brown Skin.” Both are beautiful reminders to the Latinx community that they should be proud of who they are, what they look like and where they come from.

For those wondering what to anticipate from a live performance from Lange, just know that anything could happen. (During our conversation, he did officially confirm the return of his signature Tinsel dancers on this tour.) Helado Negro has performed solo, with touring musicians (including Atlanta’s own Adron), and once with the St. Paul Chamber Orchestra in Minnesota. “I’m down for the live shows to be whatever they can be. If there’s an opportunity to make them diverse, in whichever way – I’m down to do that. But it’s not like one show is better than the other.”

For this tour, Helado Negro has been recruiting local acts to support each show via local booking agents and promoters. There are always hurdles in finding the right bands for the job though, especially when he himself gets pigeonholed as “Spanish electro-pop.” “It’s difficult a lot of times because there’s not always a sensitivity to the flow of the evening. Sort of how a DJ would feel out the crowd,” he says.

Coincidentally, Helado Negro’s DJing background traces the artist back to Atlanta. Years before he began putting out records, Lange spun records at Octane. “We had a regular night when Octane first opened, right at the point when they first got their beer license,” he tells me. “It was a really good time. It was fun.”

Helado Negro will be performing at the Masquerade on Sunday, November 6, at 7 p.m., with DJ Florista and Jock Gang opening.