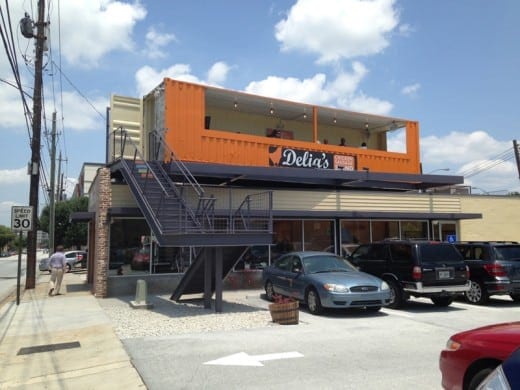 An Atlanta rooftop in July might not seem the most hospitable of places to kick back for a bite to eat. At the new Delia’s Chicken Sausage Stand, however, the rooftop is the main attraction. There, patrons can enjoy city views from the comfort of a repurposed bright orange shipping container, which provides quite a view itself for those on Marietta Street in West Midtown.

The men behind the unorthodox design, Erik Lewitt and Jordan Williams, are the founding principals of architecture firm Plexus R+D.

Fascinated with the possibilities of using what they call “found objects,” the two have made a study of shipping containers, proposed in an unrealized design of a semipermanent location for a Yumbii food truck in Midtown.

These efforts represent one aspect of a diverse, and frequently offbeat, practice that encompasses small residences and large commercial planning endeavors. Their design for the Atlanta headquarters of BFG, a brand image agency, for example, complements the firm’s in-town, Gen Y vibe. Taking a cue from the fact that skateboarding is a big part of BFG’s corporate culture, they used a quarter pipe for the wall between the entry and the offices. Graffiti-splashed walls and industrial materials contribute to the edgy feel.

The recently completed office space for Heritage Plastics, a conversion of a windowless 13,000-square-foot warehouse into a corporate headquarters and laboratory complex, would have been a straightforward endeavor but for the requirement that the project house the owner’s taxidermy collection.

The “full menagerie,” jokes Lewitt, was remounted on sleek white bases which were meticulously modeled in the computer before production to ensure they would conform to the animals’ poses. The result is a stunning juxtaposition of wild animals and ultrasleek interiors.

Lewitt and Williams joined forces more than a decade ago. The two architects met at Princeton University while completing their Master’s of Architecture degrees and continued to cross paths after their 1992 graduation as they worked at different firms around the country. In 1999 they found themselves in Jacksonville, Florida, both tired of the corporate architecture environment.

Seeking a new experience, they entered a competition for a multimillion-square-foot mixed-use biotech research park in China. Williams delivered the model to China himself. He returned with the commission.

With a compressed timeline of only four months, it was a chaotic start. They worked two shifts to meet the intense demands of a project that was less a building than a small city.

Construction commenced even before the design was complete. Then in 2001, Beijing won the bid to host the 2008 Olympics. Immediately, the government halted construction on the biotech park and diverted its funding for games-related construction.

Despite the fact that the project was unrealized, Lewitt says it was a great experience. And even as the project came to an abrupt ending, something else had begun: their firm.

“We didn’t set out to start a company, but once we did we enjoyed it,” he says.

Bright accent colors, novel materials and unexpected geometries characterize their work, but both are quick to say that they avoid conforming to any one style or approach to design. The principals characterize the firm as a “design think tank;” the R of R+D is research. Every Plexus R+D project is seen as an opportunity to undertake research and deploy forms already studied in theoretical application (like the shipping container at Delia’s).

The process begins with a practice they call, ironically, “digression.” At the start, they develop ideas independently. Lewitt focuses on three-dimensional computer-aided design (CAD), while Williams focuses on constructing physical models. After working for a few days on their individual ideas, they bring the designs together to weigh their merits and select the best elements from both investigations.

Like many firms, Plexus R&D suffered during the economic downturn. Building projects were hard to come by, and the practice shrank from a dozen employees to a skeleton crew. During this period Lewitt and Williams turned their exploration to architectural applications of video game software. They conceived a project to create an architecturally derived virtual world. In 2013, they teamed with Emory Libraries to create Virtual Rome, a re-creation of Rome in 1676, which was exhibited at the Michael C. Carlos Museum last year as part of Antichità, Teatro, Magnificenza: Renaissance and Baroque Images of Rome.

No matter whether it is a building or a conceptual design, a digital or physical project, sprawling or compact, this small firm brings big ideas to the table.