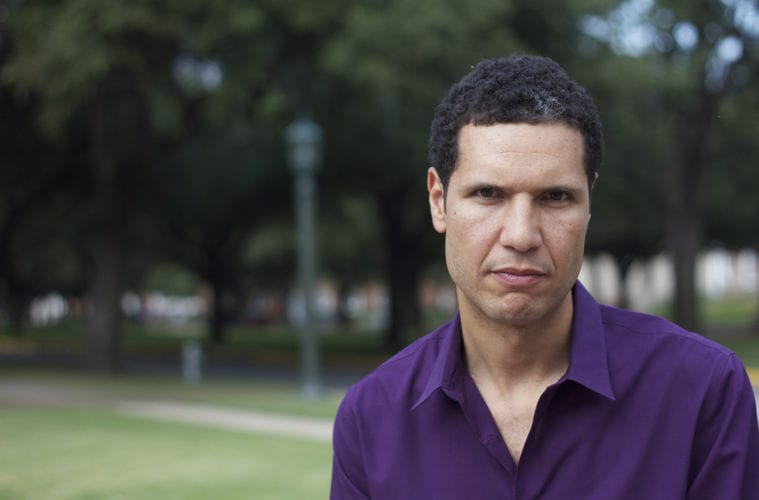 (Photo by Adam A. Anderson)

Playwright, professor Will Power trains a new generation of artists at Spelman

For playwright and performer Will Power, a life of art is as much about creation as it is about entrepreneurship. He is an innovator of hip-hop theater, a form of theater that uses rap, dj-ing and other elements of hip-hop culture to tell diverse stories. In his nearly 30 years working in the theater, he has toured the world with his solo show FLOW and has had a successful Off-Broadway run with his Thebes adaptation The Seven, and his Muhammad Ali play Fetch Clay, Make Man has been produced at theaters around the country — namely Kenny Leon’s True Colors Theatre Company in southwest Atlanta.

Now, Power is living in his next chapter, teaching contemporary theater writing, solo performance and a general arts seminar course at Spelman College. The Bay Area native taught at the University of Massachusetts and Southern Methodist University before moving to Atlanta last summer to join the faculty at Spelman. The saying “those who can’t do, teach” does not apply here, and Power is hoping to inspire young artists to create their own opportunities.

ARTS ATL: How has your play-writing practice informed your teaching?

Will Power: I come at teaching as a practitioner and not as an academic. I started out teaching when I was developing as an artist and doing workshops in my community. I try to give students intellectual knowledge but also skills they can use working in the field, pulling from my knowledge as a working artist. ARTS ATL: There has been a lot of debate over the past few years about the value of a fine arts degree. A lot of students and parents are skeptical about whether it pays off. How do you relay to them the value of a degree in the arts?

Power: Thirty years ago, it was a better argument to say things are unsure in fine arts and you should go get something secure. I talk to parents about that a lot because they’ll say to me that they want their kids to have a job. My reply is yes, you want them to have a job, but you also want them to be happy. I ask students, “What is it that you love, and how can you make money at that?” I’m a living example of that. I’m not wealthy, but I support my family. Is it difficult? Yes. But it can be done.

ARTS ATL: What necessary skills are most theater students not getting in school?

Power: There are certain theater departments across the country where most of the faculty have never had a play produced or never toured, which are things students want to do. You have to have a balance of people who are working in the field. The thing I’m trying to help students do is become more robust and profound storytellers. My area of expertise is original story writing, so plays, musicals, verse theater, solo performance. I feel like a lot of time when you go out into the field, someone’s giving you material to audition. In addition to auditioning, I’m preparing students to create their own work. I want them to be entrepreneurial. A lot of theater departments focus on Shakespeare, Stanislavski and Aristotle, which are all important, but how do you apply that in a contemporary context in relation to your own work?

ARTS ATL: Creating original art is one thing, but finding the audience is another. How are you preparing students to find their audience?

Power: Theater has some great advantages and some challenges as a medium. One of the things that’s great about theater is that if you and I write an original piece, we own it. One of the disadvantages of theater is that audiences can be hard to get, and when you do get an audience, sometimes they’re not as diverse. I had a module within contemporary theater where I gave assignments where the students had to think about how they reach their friends, how they reach their family and how they use social media for marketing. I’m also hoping with Spelman and Morehouse that some of these students go on to be theater lovers and philanthropists. If they have a love of theater, even if they become a teacher or lawyer, they’ll get their networks excited about the art form.

ARTS ATL: What impact do you hope to make on the arts at Spelman?

Power: I want to be able to develop new work with students from Spelman and Morehouse. I have a piece called Stagger Lee that is a retelling of an African American folktale. It was produced in Dallas, but I’d love to rework it and stage it here. I’m also working with Aku Kadogo [chair of Theatre & Performance at Spelman] on rethinking the curriculum. Eventually my course, “Solo Hip Pockets,” will become the capstone, and students will have to produce a solo performance. Our students are so creative, and I want them to think outside of the box. The skills one learns in theater, such as empathy, conflict resolution and public speaking, can serve you well in your life. They develop the whole person.