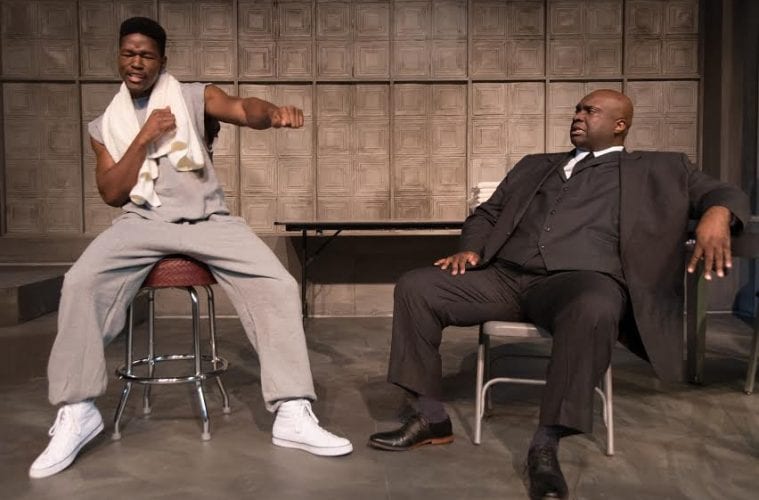 Float like a butterfly, sting like a bee; the rising Ali with the fading icon Stepin Fetchit. (Photos by Josh Lamkin)

It’s 1965, and Muhammed Ali (who has just changed his name from Cassius Clay) is preparing for his rematch with Sonny Liston. He’s already famously defeated Liston once, so in the public eye Ali plays up his confident, boastful persona, not just bragging that he’ll trounce Liston again, but doing so in rhyme.

Behind the scenes, it’s a different story. He’s so plagued by secret fears and doubts, he turns to a most unusual source for help: the actor who played the comically lazy black servant in old Hollywood films, Stepin Fetchit, who even in 1965 had become a reviled symbol of stereotypical black subservience.

This is the inventive, resonant scenario that playwright Will Power brings to life in his new play Fetch Clay, Make Man, which is loosely based on the real friendship between these two seemingly incompatible historical figures. Kenny Leon’s True Colors Theatre gives the work its Atlanta premiere at the Southwest Arts Center through November 22 in a sleek and likeable production.

Actor Rob Demery makes a convincing and sympathetic Ali; he speaks Ali’s deliciously self-declarative verse well, but he’s even better at letting us see some of the private doubt behind the bravado. In one of the most memorable scenes, Fetchit asks Ali to visualize losing to Liston, and Ali resists the idea — he says it’s utterly impossible — but eventually he complies. Danielle Deadwyler and Rob Demery as Sonji and Muhammad Ali.

Demery makes it clear that not even Ali’s imagination wants to go to that place, a keen insight into the man himself. Ali’s strength and bravado make him famous, but Demery gives him interesting vulnerability and self-doubt.

Danielle Deadwyler is a joy to watch as Ali’s then wife, Sonji Clay. Clay is willing to play the role of the dutiful Muslim wife — she makes it very becoming — but it’s clearly just part of a larger, more complex framework for her; when she needs to, she can wrest control from the men. She’s a character weighted down by her wild past, but also not entirely ready to relinquish it as part of her identity, and all of this Deadwyler makes perfectly clear from moment to moment in her funny and wise performance.

Brad Raymond as Fetchit has the toughest task of limning a character who is potentially unsympathetic. His Fetchit knows he blazed a significant trail (he was among the first black millionaires and the first black actor to receive a screen credit), but the society has changed around him and he is now a pariah.

He conveys this most touchingly in the character’s desperate and constant need for public clarification and absolution, a resolution that he slowly realizes will likely never arrive.

Power has hit on some electric material since Ali and Fetchit were both self-knowing crafters of their personae but, in the end, there’s something too analytical and stagey about their discussions. They occasionally sound like contemporary academics discussing the various meanings of these two public figures. The characters seem to have that sort of distance, perspective and, strangest of all, abiding interest in considering, comparing and contrasting themselves in that way.

The technique does allow Power to bring various considerations to Fetchit’s work (were these performances possibly more subversive than they might initially appear?), which becomes one of the most interesting threads of the show. But part of the problem here is that Fetchit has almost entirely disappeared from the cultural conversation.

Although he was once as famous as the Marx Brothers or Charlie Chaplin, the controversial nature of his work means that it’s become seldom seen; a consideration of his possible significance could lack context and specificity for contemporary theatergoers.

You couldn’t say that the play has a plot, which is a fault. We watch interesting people interact in interesting ways in Act 1, and then we come back for more of the same in Act 2. But during intermission I realized I didn’t have a single unanswered narrative question, and no curious corner of any character felt as if it had yet to be revealed.

The action leads up to the big rematch with Sonny Liston, but those familiar with Ali’s career already know how it comes out and even those who are only nominally familiar with “The Greatest” can probably guess. The subject is boxing, which makes the play’s lack of noise, drive and adrenaline seem odd.

Still, the play is a powerful and smartly enacted consideration of two very different black male celebrities, who both, in their own way, sought success and self-actualization in a society that sought to keep them down.