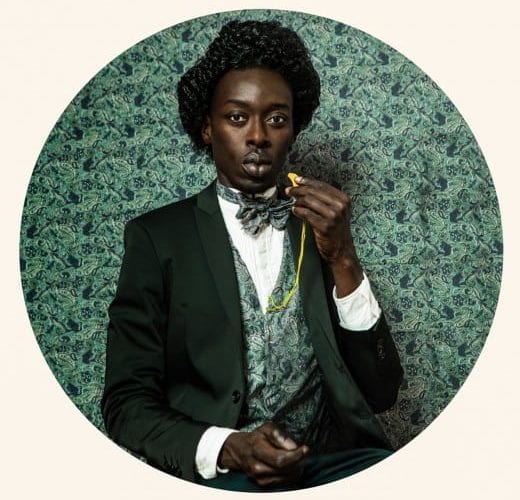 Review: Strong and subtle, “On Being Black” is a must-see, at Arnika Dawkins Gallery 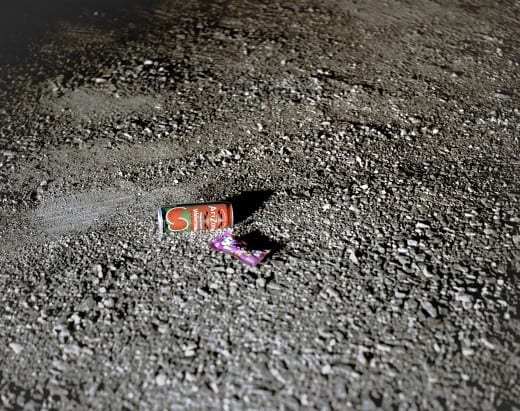 On Being Black is an excellent multilayered and highly nuanced remix of an ongoing conversation in contemporary art about identity, power and transformation. On view at Arnika Dawkins Gallery through January 22, these photographic works by 22 emerging and celebrated artists also expose the coded dialogue regarding class, color, and consciousness within the black community. 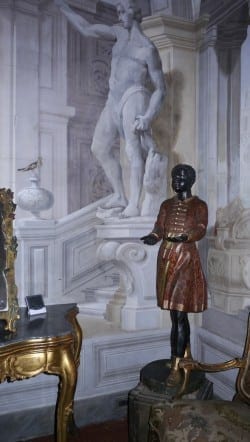 A subtly brilliant photo, Gestures, Villa La Pietra (2014) by Guggenheim and MacArthur fellow Deborah Willis, would seem to be an innocent tourist photo of a lavish interior. But the statue of an African man in the center, a popular decorative object known as a Blackamoor, teases out Italy’s history of conquest in Africa, its practice of slavery and casual racism.

Representing a more direct tack, recent Savannah College of Art and Design graduate Le’Andra LeSeur’s Trayvon (2015) combines photography with provocative audio to highlight the powerlessness of black males in the U.S. The photograph is a night scene of a pack of Skittles and a can of Arizona Watermelon Fruit Juice Cocktail lying in the dirt. An accompanying soundtrack plays clips from radio talk shows disparagingly discussing Trayvon Martin. Intermittently, the judge from the Trayvon Martin trial can be heard delivering the George Zimmerman verdict of “not guilty,” immediately followed by piercing screams and gasps heard in the courtroom. It is harrowingly memorable.

Delphine Fawundu’s haunting photo What Do They Call Me? My Name is Aunt Sarah (2012) is an image of the bare back of a dark brown model on which words written in white paint spell out labels/roles: corporate slave, nanny, mammy, single mother, burden, wife, freedom fighter. The letters recall whiplash welts seen in a famous image of an abused enslaved person. The title, taken from a verse of Nina Simone’s popular 1960s song, Four Women, suggests survival.

What do they call me/My name is Aunt Sarah

Other works are about empowerment. Hank Willis Thomas’ Black Power (2008) is a photo of a man’s “grill,” the hip-hop fashion statement of adorning the front teeth with decorative gold veneers, spelling out “black power.” It is an assertive expression of identity.

Frederick Douglass (2015), an arrestingly staged, metaphorical portrait (and self-portrait) by Senegalese artist Omar Victor Diop, belongs to his Diaspora series, which honors black heroes ignored by mainstream history. Although Diop mimics the hairstyle and clothing from a 19th-century daguerreotype of the statesman, he gives the portrait a baroque sensibility akin to Kehinde Wiley’s paintings. The viewer is struck by the fullness of Diop’s lips, the silky, satin sheen of his rich, dark chocolate complexion and the lush, green hue of his jacket as he sits in front of a patterned background. (The canary yellow whistle he holds is a hermetic reference to racism the artist experienced playing soccer.) 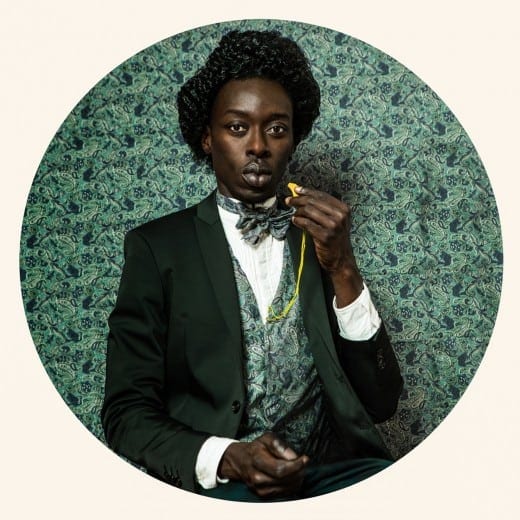 A number of photos deal with issues of body image. Born of a Panamanian father and Croatian mother, Qiana Mestrich explores the complexities of a multiracial existence. Untitled #3 (2012) is a diminutive photograph of “found” internet images composed by placing them in water and letting them float together randomly, a process she calls “water collage.” She then photographs the result.

In it, a drawing of a Native American woman, perhaps of Panamanian origin, obscures the upper portion of the faces of a Caucasian and a black woman. Barely visible is a stairway and row house, along with pieces of cut up paper all overlain by the translucent silhouette of a bushy hairstyle of a person of color. The image is one of a series of nine that illustrate a personal story related to the “obstinate nature of curly hair” and the public humiliation she experienced as she attempted to blend in.

John Pinderhughes’ Pretty for a Black Girl (1998) speaks to the demeaning experience of being judged through the lens of Caucasian-American beauty standards. Sheila Pree Bright addresses the same theme in Plastic Bodies (2003), a mash-up of the face of a Barbie doll and a woman of color that distorts both.

While such works grapple with racial labeling imposed by a broader society, others address practices within the black community that are just as powerful and destructive. With impressive technical dexterity, Spelman graduate Ayana Jackson dives into the issues of class and color in her telling narrative, Does the Brown Paper Bag Test…Really Exist? / Will my Father Be Proud? (2013). At times during the past century, the lightness of one’s skin determined social rank, and those whose complexions were darker than a brown paper bag failed the “test.” In the portrait, six sisters, perhaps in their late teens to late twenties, all played by Jackson, pose in long, black dresses worn around the turn of the century. Given their darker complexions, they will not likely pass the test. The viewer is left to ponder whether their social ascension will be thwarted. Will their father still be proud?

Arnika Dawkins has produced an extremely sophisticated dialogue around color and identity.  Provocative, meaty and also beautiful, this show is a “must see.”