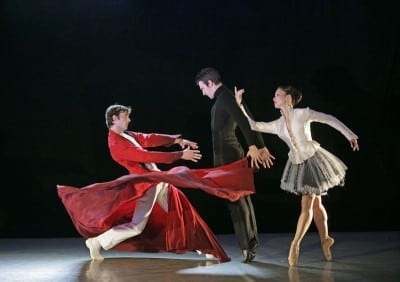 “Come Fly with Me”

When master choreographer Twyla Tharp pairs with Frank Sinatra, they make beautiful music — this time in the Alliance Theatre world premiere “Come Fly with Me,” conceived, directed and choreographed by Tharp.

On stage, a live big band accompanies the re-mastered voice of Sinatra singing classic songs — mainly from the 1950s and ’60s — as four dancing couples fall in and out of love over the course of an evening. Most of the show’s dancers are seasoned veterans of Tharp’s Tony Award-winning “Movin’ Out.” If “Come Fly with Me” is anything like “Movin’ Out” or her earlier Sinatra ballets, they’ll weave through intricate duets and toss off daredevil lifts with finesse, as the emotional nuances of love’s highs and lows are physically expressed and viscerally felt.

Now in its second year, Atlanta Celebrates Photography’s opening event features dusk-to-midnight revelry, saturating downtown Atlanta’s Castleberry Hill District with photography, light, film, poetry, sound and, this year, Lauri Stallings’ fresh, innovative choreography. Her dance company, gloATL, will perform the featured site-specific event. It is billed as “pour,” an expression of the district today as an outgrowth of its layered past. The work takes a moving audience through the back streets of the district on a journey Stallings describes as “gritty, faded, secretive, unsettled.” Le Flash publicity promises this: “dozens of diaphanous dancers flood the streets with liquid energy.” (There are no gloATL pictures for this, so here is another Le Flash artist: Mark Leibert’s “Moth Lantern Wings Flutter and Fade into the Moon.”)

Oct. 2, 7:30 and 10:30 pm. The outpouring begins at Bradberry Street at Fair Street. leflash-atlanta.com

Choreographer David Parsons teams up with Tyley Ross and AnnMarie Milazzo of the East Village Opera Company in the most ambitious work Parsons has taken on. “Remember Me” tells a contemporary story based on a classic love triangle entailing unrequited love, romance, jealously, sex and vengeance. A compilation of classical arias arranged as rock songs drives the multimedia spectacle that includes complicated digital lighting, video projections and aerial dance. Parsons’ powerhouse dancers are risk-takers, comfortable with physical extremes, passionately throwing themselves into Parson’s choreography. On one hand, the whole dramatic spectacle may be over the top; on the other, it may be overwhelmingly entertaining.