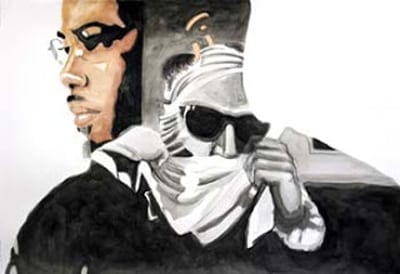 The Sunday memorial for Charles Huntley Nelson Jr., at the Atlanta Contemporary Art Center, resounded with respect and love for this quiet but passionate Atlanta artist, who died July 30 at the age of 38.

During the last five years of his life, Nelson had come into his own as an artist. Video, as you can see for yourself on his website, seemed to be the vehicle that best suited his ideas and wide-ranging intelligence.

The watercolor above is from a series related to his eponymous video. Typically allusive, the project took its name and theme from Ralph Ellison’s novel “Invisible Man.” Here and in the video, Nelson fills the self-portrait silhouette with imagery from the 1933 film of H.G. Wells’ novella “The Invisible Man.”

As I wrote in my account in today’s AJC:

Nelson was equally adept at painting, drawing and video, and he put them all to work as a conceptual artist. Over the last few years, the Morehouse College professor had garnered accolades for richly layered videos that drew from literature, film, popular culture, music and art history.

A science fiction buff since his Houston childhood, Nelson mined the genre’s themes of alienation and powerlessness to address issues of race, particularly his experience as an African-American male, and class. He was at work on “Alphaville” (after the Orwellian 1965 Jean-Luc Godard film) [image below], his most ambitious multi-media project, when he was diagnosed with stomach cancer.

The crowd that gathered at the Contemporary on Sunday celebrated Nelson the man, a linchpin of the art community he so loved. Yet for all the dystopias and invisible men in his art, Nelson was, by the recollection of his many friends and his wife Tonia, a man who created a vast web of connections — through his college fraternity, his church and the Atlanta art community. “If the art community were a city, Charles would have been the mayor,” said fellow artist Fahamu Pecou.

Nelson leaves behind his wife and two sons. Donations to the Nelson Scholarship Fund can be sent to Sunrise Bank of Atlanta, 600 West Peachtree St. N.W., Suite 300, Atlanta, GA 30308.