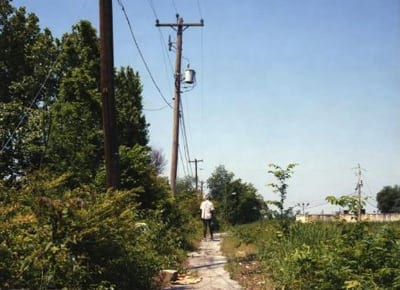 Photographer Alec Soth seems attracted to outsiders. The people in his breakout book “Sleeping by the Mississippi” (from 2004) live at the edges of (what was then) American prosperity, their emotional or economic privations etched on their faces.

In “Black Line of Woods” — a haunting and beautiful exhibition that’s part of the High Museum’s “Picturing the South” series — he trolled the region for people who chose to leave the mainstream.

Soth cast a wide net. He visited a monastery in Georgia, where he took the beatific photograph below, and sought out the spot in North Carolina where police apprehended Olympics bomber Eric Rudolph, a drab nowhere kind of place but for the eerie lighting of the evening shot.

But the character on which Soth lavished the most attention was the woods itself, their hideouts. The exhibition title is a phrase from “A View of the Woods,” a story by Flannery O’Connor, Soth’s muse for this project. She used the woods as a recurring device throughout her fiction, and he follows suit in this series.

Here’s an excerpt from my review in today’s AJC:

Both artist and author tap into archetypal, contradictory meanings of the forest in myth and fairy tale as a place beyond the bounds of civilization.

On one hand, it might be a haven and a balm for the spirit. A silver disco ball suspended from a tree in the aptly named Enchanted Forest, Texas, suggests the woods as a magical realm. The stand of tall, silvery, pencil-thin trees that dwarf a monk in Resaca, Ga., becomes the church of the great outdoors.

On the other hand, the forest is a savage, lawless territory. In “Bardstown, Kentucky,” a clapboard house, monitored by a single exterior light, looks small and helpless, swallowed up by the night and the woods on the ridge above it, a literal “black line of trees.”

What’s beyond the black line of woods is as fraught and mysterious as the minds of those who choose to live there.