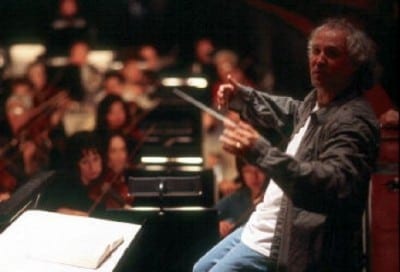 Live from London: Donald Runnicles conducts over the Internet

People who listen to live concerts on their computers, take note: Donald Runnicles conducts Wednesday evening at the BBC Proms festival in London, and you can hear the whole thing for the next seven days. His orchestra is the BBC Scottish Symphony, the band he’ll lead as chief conductor starting this fall. I wrote about the Proms just after the festival opened for the summer, and I’ve managed to eavesdrop on some exceptional concerts.

No radge, Runnicles will continue for another two seasons as Atlanta Symphony principal guest conductor, where his concerts tend to be the most memorable events of the year. Did the ASO play anything else as emotionally gripping as that Mahler 6 in April? Runnicles will soon also take up the Deutsche Oper Berlin and keep his hand in enough other orchestras, opera companies and summer festivals (Grand Tetons in Wyoming?) that it’s hard to keep track of him. The gist of his career right now is that he’s gradually migrating his base of operation from the U.S. — as music director of the San Francisco Opera, which ended last year — to Europe and Berlin.
Today’s Proms concert is an oddly heavy and programmatic program, and very Runniclesian: John Adams’ “Slonimsky’s Earbox,” Mozart’s popular D minor Piano Concerto (with Israeli pianist Shai Wosner) and Richard Strauss’ “Symphonia domestica.” Atlanta Symphony fans will recall that Wosner, a poetically understated musician, pictured above, has played with Runnicles in Symphony Hall. Apparently their music making has gone international.