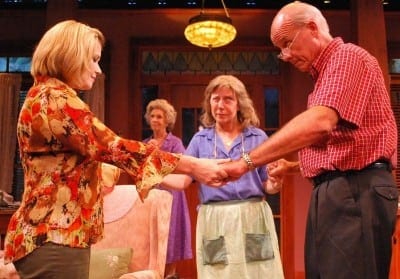 Theatre in the Square’s edgy Alley Stage fades to black

Since I’ve been reviewing Atlanta theater, Theatre in the Square‘s Alley Stage has become a favorite destination, a purveyor of work often more raw and edgy than from intown venues, including Actor’s Express and the Alliance. I doubt, for example, that the white-gloved Alliance would have had the cojones to produce Richard Greenberg’s “Take Me Out.” (Shower scenes? Nudity? That might offend someone!!) Local theater-goers wondered why an adventurous, inside-the-perimeter theater company didn’t scoop up Greenberg’s scathing account of the closeted world of professional baseball, which won the 2003 Tony for best new play. Or, to cite another deliciously naughty entertainment, Douglas Carter Beane’s “The Little Dog Laughed,” a wicked, pre-“Entourage” sendup of the ethical void beneath the Hollywood glitter. Instead, Theatre in the Square got rights to both and turned them into Alley Stage hits, even in the conservative and not always gay-friendly environment of Cobb County.

But now it seems the Alley’s glory days may be on the wane.

While the Marietta theater’s mainstage season just opened with “The Savannah Disputation” (Judy Leavell and Nita Hardy are pictured at left), which I endorse with some reservations in my AJC review, the Alley’s contemporary programming has been cut. After producing just one new work last season (the thoughtful but uneven “Speech & Debate”), the theater apparently couldn’t afford to take the risk on any more loss leaders.

“As much as we love [the Alley’s challenging plays] and use them to recruit new audiences and give younger actors and designers a chance to work professionally, we do take a loss and we just can’t afford to do that this year,” says theater publicist MJ Conboy. She added that the Alley hopes to rally, and come back with some contemporary programming for the 2010-2011 season. The economy may determine that decision.

Meanwhile in the Alley, we can look forward to revivals of the children’s hit “The Library Dragon” and the holiday chestnut, “A Tuna Christmas.” The theater’s next mainstage show is the 20-year-old London thriller “The Woman in Black,” to be followed by a new adaptation of Edith Wharton’s “Ethan Frome” and “His Eye Is on the Sparrow,” a musical biography of Ethel Waters.

For those who’d like to know more about Georgia-born author Evan Smith’s “The Savannah Disputation,” the theater will have a special discussion of the theological issues raised in the play. That’s this Sunday, Aug. 30, from 4 to 5 p.m. Panelists include Father Gene Barrette of St. Thomas the Apostle Catholic Church, Smyrna; Father Bryan Small, director of The Catholic Center, Emory University; Rev. Bob Tyler of Peachtree Christian Church, Atlanta; and Rev. Sam Henderson with First Presbyterian Church on the Square. Tickets for the 2:30 performance are $27 each. Anyone who has seen the play is invited to the discussion. (In photo, from left: Mary Kathyryn Kaye as Melissa, Judy Leavell as Mary, Nita Hardy as Margaret and Peter Thomasson as Father Murphey. Photos by MJ Conboy.)