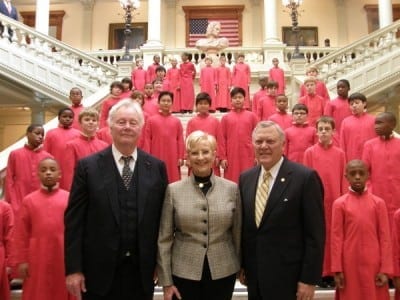 No surprise, the embattled Atlanta Boy Choir (ABC) has pulled 72-year-old Fletcher Wolfe (left), the group’s founding director, out of retirement and named him its interim artistic director. A board member told me Wolfe would serve “at most a year” until the permanent chief was hired, although the wording of Wolfe’s letter to parents (see below) isn’t specific.

Read today’s AJC update and read my take on the boy-choir meltdown here.

With a locally known and respected conductor in place, the ABC’s primary concern now shifts to membership. How many boys have signed up for the coming year? ABC leaders have not released those numbers, and one board member I spoke with skirted around the question.

Meanwhile, a potential rival group, the Georgia Boy Choir, is hoping Wolfe and the venerable history of the Atlanta Boy Choir is less of a draw than conductor David White, who led the ABC for eight years till his termination last month and is now helping start the new group.

The other question in my mind concerns former ABC managing director Adisa Nickerson (left). Wasn’t he supposed to take a hands-on role overseeing the budget? Apparently the ABC board looked right through Nickerson, considering him David White’s pawn. Nickerson had been furloughed when the ABC debt reached $250,000; after White was fired, Nickerson quit ABC. Nickerson is now billed as the Georgia Boy Choir’s executive director. The GBC’s “informational meeting” is scheduled for August 24.

Is there really room in in-town Atlanta for two boy choirs? What are parents thinking about these two groups?

Here’s the letter the Atlanta Boy Choir sent out yesterday at about 1 p.m. to parents and donors:

I know you must be proud to have a son in this organization which has represented our city so proudly for one half a century.

I was fortunate to be its founding director and to have had so many marvelous experiences for forty-five of these years.

This does not include Mexico, Alaska, Nova Scotia, Canada, and British Columbia.
We performed on many occasions at the White House, and in Rome at St. Peters five times with Pope John Paul officiating.

The thousands of young men who went through the choir’s ranks can be found in every walk of life imaginable and they make us all very proud because of their contributions to this work.

The Atlanta Boy choir is more than one individual.  I have always considered my involvement a partnership with the Almighty who has blessed us beyond all measure and the choir’s success is due to His grace and goodness.

Never a day goes by that one of our boys (now grown men) call to let me know what they are doing and most recently, because of the events which have happened, have encouraged me to return to the helm of the choir until we decide on the permanent director.

I am very pleased  to tell you I have accepted this challenge and will direct the choir this year while we make our search.

Already we have had several interviews with world class conductors and will continue these throughout this year.

I know you will be excited to learn that my several choir assistants include Dr. Lawrence Weaver and Dr. Robert Henry.

Dr. Weaver was my assistant for many years. He is a graduate of Morehouse University and the University of Michigan.  Dr. Henry has won almost every international piano competition in the world. He appears as soloist with the Atlanta Symphony and is professor of piano at Kennesaw State University.  He served as my accompanist years ago and recently received his doctorate from the University of Maryland.  I assure you there is not a finer accompanist in the entire world and you will be thrilled when you hear this great talent.
We are delighted to have many of our last years’ choir boys return and look forward to our shared musical experiences.

We are planning an exciting season for our boys culminating with an important international tour.  I would like nothing better than to take these boys once again to England, Scotland, and Wales.  We have performed in these venues many times during my times with the choir.  The people of the British Isles have fond memories of our choir.  Of course on all our tours the educational value is immeasurable.  Experiencing singing in the great cathedrals of London’s St. Paul, Durham Cathedral, Canterbury and York Minster; then to travel the moors into Scotland past Hadrian’s Wall to Edinburgh and Paisley (there to sing in the 12th century church) on to Wales by way of Bristol where we go aboard a ship to rehearse our nautical opera “Golden Vanity.”  In Cardiff we sing at St. David’s Hall made famous by the great male choirs as see in the film “How Green Was My Valley.”
All these things await your sons plus the finest music education provided by any music organization in the nation.

Please take advantage of these opportunities.  They come once in a lifetime.

We solicit your good thoughts and especially your prayers as we continue the great tradition of this wonderful organization.