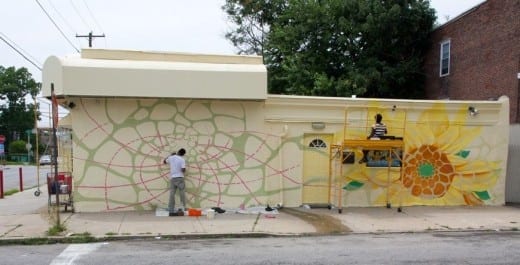 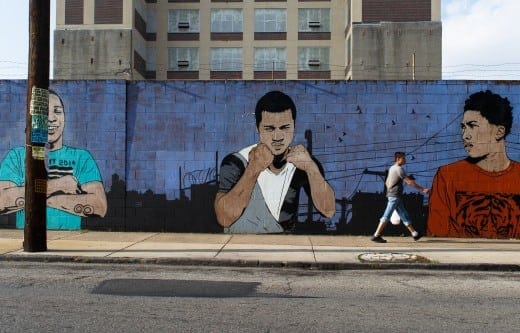 Artist Chris Stain worked with Philadelphia youth, encouraging them to share their stories. They made a zine of the stories and photo portraying them as they want to be seen. Three are the source for the mural, All the Way Live from 215. (Photo by Steve Weinik)

Public art, as befits a genre that begins with the word “public,” is a big tent.

It encompasses projects as timeless and traditional as the Lincoln Memorial in Washington, D.C., and as fleeting and DIY as ATL Lantern Parades. Public art serves a similarly broad range of purposes, sometimes all at once. But whether that’s remembrance, propaganda, aesthetic or entertainment, the subtext is always community — expressing (or shaping) its values and history, enhancing shared spaces, creating, literally and figuratively, common ground.

The Atlanta Regional Commission, which recently announced the inauguration of a regional public art granting program, is particularly interested in fostering common ground. In fact, it is looking to support projects in its ten-county purview that are ground up: applicants will propose artworks, not for but with their communities. Consensus is king. 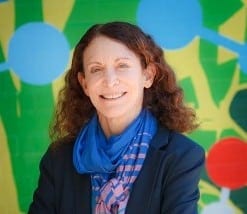 The inspiration for this program is a dynamo in the guise of a wisp of woman. Jane Golden, executive director of Philadelphia’s Mural Arts Program, spoke to a group of Atlanta leaders during a LINKS visit last year. As charismatic as any preacher, Golden recounted stories and showed slides that demonstrated the human, social and civic value of art when it grows out of a community’s values and aspirations. Guests who attended her galvanizing talk at the program kick-off April 28, courtesy of the Arthur M. Blank Family Foundation, were not surprised to learn that the Atlanta leaders starting filling the collection plate for a program before even leaving Philadelphia.

ARC has raised $100,000, enough to supply matching grants to four to six projects in the program’s inaugural year. It will pay 1:1 up to $15,000 for a single project and has engaged WonderRoot to supply technical and other kinds of assistance. The artworks must respond to this theme: there is ample opportunity to participate in making history in our region.

As synchronicity would have it, our own mural maven Monica Campana, executive director of Living Walls, is spending a year’s sabbatical in Philadelphia working for Golden. She is project manager for Open Source, a temporary exhibition taking place this fall of site-specific works by international practitioners such as JR, Shepard Fairey, Odili Donald Odita and Sterling Ruby.

Philly’s Mural Arts Program operates at a very different scale than Campana’s five-year-old start-up. Begun as a city department, the program is now a non-profit with more than 3,000 murals in its collection, more than 30 years’ worth of partnerships in city government and the private sphere, and 50 staff members.

“And 50 is not enough,” a harried Campana wryly notes.

We discussed the Mural Arts elastic parameters and constant evolution. Its definition of “community,” for instance, is not limited to geography. Its Restorative Justice Program creates projects and teaches skills to prison inmates, probationers and parolees. 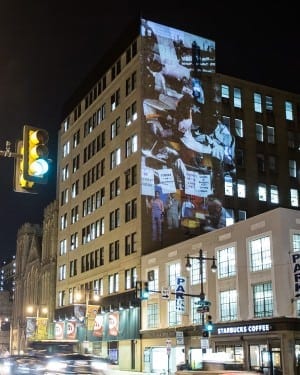 Ghosts of Philadelphia Industry, a projection by Nadia Hironaka and Matthew Suib, memorialized the city’s lost industrial base. (Photo by Steve Weinik)

Campana says she’s learning a lot about processes and concepts that will inform future work in Atlanta. A big takeaway: “In order to create intentional projects, we need to take more time,” she says. “They can’t be done in two weeks like we have in the past. We need to bring the artists in earlier for site visits and know their direction in advance.

“And we need more money!”

Campana is soaking up ideas, but cautions, “we need to take into consideration what Atlanta is and how it might require a different kind of community engagement.”

And she has no intention of copying another program. While she believes, like Golden, that art can be a change agent, her interests also align with Creative Time, a New York organization that wants to make an impact but gives equal weight to the value and act of individual artistic expression.

Also a part of her brief: “We want to inspire a change in people to care more about their public spaces. We want to live in a city we care about, a better, healthier city.

“Living Walls is unique to Atlanta,” she says, “and we’re still finding out what that means.”