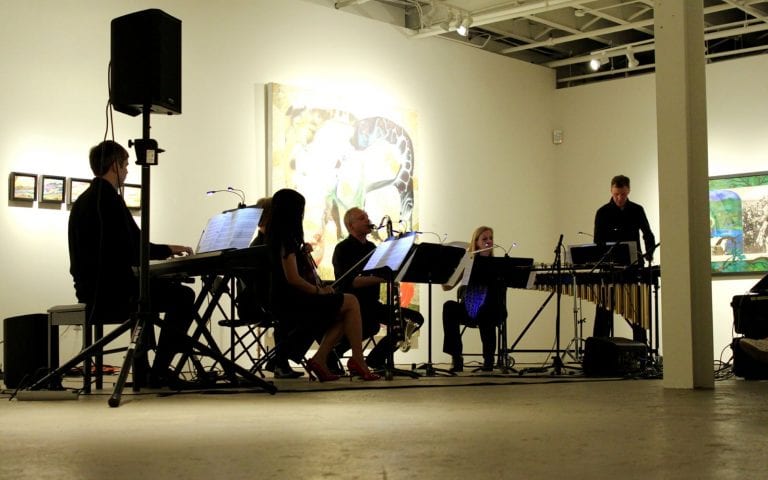 This past Wednesday evening, at the Museum of Contemporary Art of Georgia (MOCA) in the Bennett Street enclave off Peachtree Street, new music ensemble Sonic Generator performed a concert of 21st century music by Nathan Davis, Ingram Marshall, Dan Trueman and Marcos Balter, plus a 20th-century minimalist work by Philip Glass.

The program opened with “Like Sweet Bells Jangled” (2009) by Nathan Davis. Composed in 2009 for the duo Breekbaar (percussionist David Schotzko and clarinetist Joshua Rubin), the piece is for E-flat clarinet, crotales, and ring modulator. Although there are some variations to the instruments that are possible, this instance was performed in that particular scoring by clarinetist Ted Gurch and percussionst Tom Sherwood.

The piece began in a somewhat trance-like manner, with the simple ring modulator gently expanding the sonic palette of the clarinet and crotales by generating additive and difference tones from the sounds of the acoustic instruments, giving them an eerie but pleasant sonic halo. The piece set the demeanor for the majority of the concert.

Violinist Helen Hwaya Kim performed Ingram Marshall’s “September Canons” for violin and live electronic processing. It was written in 2002 as a meditation on the events of September 11, 2001. Much of Marshall’s music bears a quality of lamentation, and a sense of suspended time, though the looping and modification of the violin part affords some gentle sense of forward motion to the work’s melancholy hues. 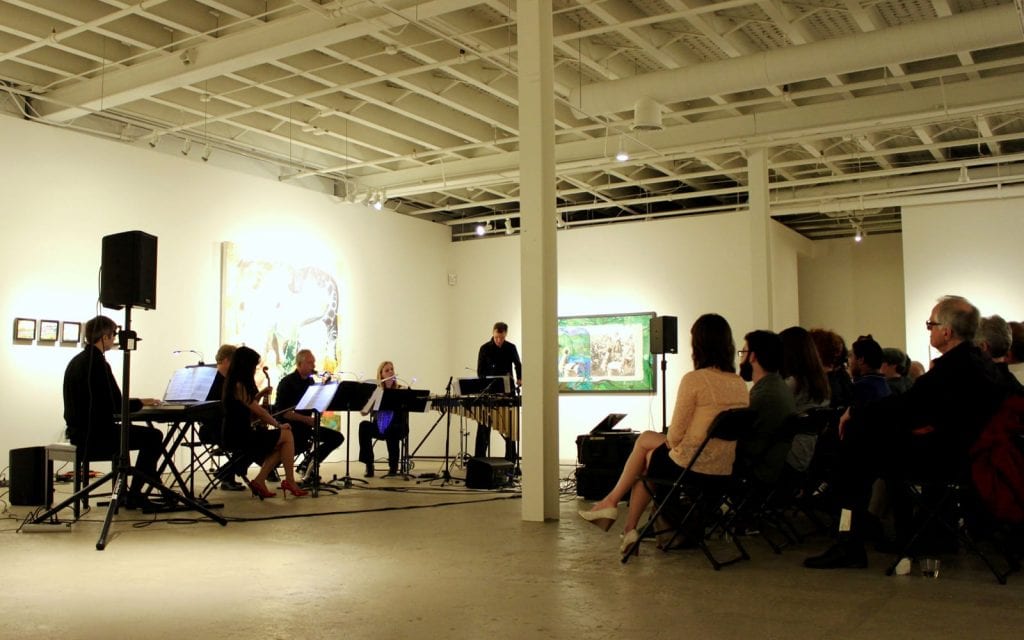 “Nostalgic Synchronic” by Dan Trueman is a set of etudes written earlier this year for “prepared digital piano.” Unlike John Cage’s invention of the “prepared piano,” where various objects stuck in between the strings of an acoustic grand piano modify their sounds in sometimes radical ways, Trueman’s “prepared digital piano” is perhaps less radical due to the ease afforded by 21st century technology. It only requires a digital MIDI keyboard — in this case, a Roland, played by pianist Tim Whitehead — a laptop and the software to control the nature of sound each key produces.

Preparation of an acoustic piano is a much trickier business, with the outcome differing from piano to piano, performance to performance. In the digital version, exact replication of the“preparation” is easy. Frankly, Trueman’s digital version is far less interesting than Cage’s original. The music itself, as consequence, seemed less interesting, although Whitehead seemed to have rendered the keyboard part competently.

The penultimate piece on the program was “delete/control/option” by Marcos Balter, a flute and cello duo written in 2008, one of a set of works the composer named after computing syntax. It was performed here by flutist Jessica Peek Sherwood and cellist Brad Ritchie. It is a delicate and meditative piece on its surface, but the challenge, according to the composer, is one of the physical recreation of what he calls its “sonic complexity.”

Much of that involved fragile episodes of tremolo, both the kind where the cellist’s bowing makes the effect on a single pitch and where it is the result of rapid alternation of pitch on either instrument. These tremolos are superimposed, that is, tremolos are played in both instruments simultaneously, as if a single multi-timbred instrument.

The entire ensemble came together to play the final work of the program, a 20th-century classic written in 1969, “Music in Similar Motion” by Philip Glass. It is is an “open score” piece, playable by any group of instruments. In this case, everyone who had played in the rest of the concert.

The piece starts with one voice played by several instruments, and continues for a while in that unison mode. Then another voice playing a fourth above the original line is added, later another playing a fourth below the original, and finally a fourth line. The entry of each new voice produces a shift in the musical drama, but throughout the piece the voices remain in parallel motion.

The biggest drama concerns when the piece will finally end, because although it keeps building expectation, it seems like the process continues on and on and a conclusion may never arrive. It does eventually, of course, and the sudden stop became the most palpable dramatic consequence of the evening. So very different in character from the more dreamy balance of the program, “Music in Similar Motion” served as an excellent closer.