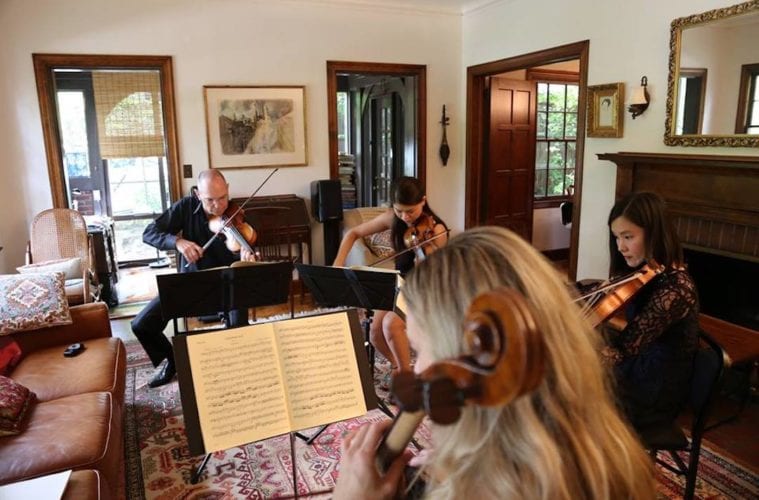 From the intimate stage of the Garden Hills Recreation Center on Sunday afternoon, the Peachtree String Quartet offered not only a superb performance but a deep and thorough repertoire that far exceeds the standard ensemble. For its March 2019 performance, the quartet took listeners to Czechoslovakia, one of classical music’s most challenging regions. While the ensemble has proven itself more than capable in previous showings, the works of Josef Suk, Leoš Janáček and Antonín Dvořák offer a range of heights daunting to even the most skilled of climbers.

The essence of the Czech sound can be found in the manner in which its composers draw warm strains of hopeful beauty from dense chord voicings and a harsh, abrasive approach to the tonality of the stringed instrument. It’s no secret to the learned classical listener that a piece of music is often informed as much by the stylistic conventions of the region from which it develops as it is the individual composer’s vision.

From the reserved pomp and circumstance of the Austrian sound to the more decadent abandon of its Russian counterpart, the world of classical music is a rich and vibrant study of the intricate tapestry of European cultures. In focusing on Czech composers, the Peachtree String Quartet brought attention to one of the most captivating and enthralling corners of that tapestry.

The opening piece, Suk’s Ballad for String Quartet in D Minor, set the stage as a prime example of the brooding, vaguely ominous Czech sound. But it was in Janáček’s “Kreutzer Sonata” (String Quartet No. 1) that a full and complete exploration of Czech-style classical music made way. As committed to education as to entertainment, the Peachtree String Quartet presented Ken Meltzer — program annotator for the Atlanta Symphony Orchestra — to offer an in-depth introduction to the sonata’s stylistic conventions. Inspired by a Leo Tolstoy short story centered on two adulterous lovers, Janáček’s “Kreutzer Sonata” is a work that tears at the guts with its depiction of love lost in a maze of ethical turmoil. There is an intoxicating bleakness to the opening Adagio con moto that is quickly overlaid with Janáček’s penchant for narrative melodicism; soon, interweaving lines are dancing in and out of one another as the implied lovers toe the waters of tragic intimacy. The disquiet boils over in the Con moto, where passionate anxiety expresses itself through wildly chaotic dueling solo passages that sound remarkably contemporary, like something out of the Kronos Quartet repertoire. Such moments of deep inner joy are intercut by brash explosions of disarray and continue throughout the Con moto – Vivace – Andante – Adagio, where the quartet’s stunning technical command was on full display.

While the “Kreutzer Sonata” alone would have been a worthy capstone for the afternoon’s performance, it was in Dvořák’s “American” (String Quartet No. 12 in F Major, Opus 96) that the Peachtree String Quartet delivered a true tour de force. Again introduced by Meltzer, the work captures a three-year sojourn of Dvořák’s life during which he served as director of the National Conservatory of Music in New York City. Time in the States inspired Dvořák to write the “American” as a sonic travelogue imbued with the African and Native American folk music traditions that he saw as the root essence of contemporary American music.

The Allegro ma non troppo opens with the kind of rich, dawning optimism that so often begins classical tributes to the United States, affording the Peachtree String Quartet the opportunity to make a stylistic shift from the dark grit of the earlier material. The subsequent Lento was contemplative and exploratory, giving rise to an excellent solo from cellist Charae Krueger, who is also the principal cellist for the Atlanta Opera and Atlanta Ballet orchestras. The Molto Vivace sees the folk influences on full display, and it is here that Dvořák sounds most comparable to contemporary American classical composers — Aaron Copland outstanding among them. By the time the Finale, Vivace ma non troppo rolls around, listeners have heard the full amalgamation of folk and classical into a triumphant and life-affirming whole.

The Peachtree String Quartet continues to enthrall audience members with technical mastery and an unmatched depth in set list selection. Here, as always, their formidable skills were on full display, conveying the emotional depth of the chosen material.