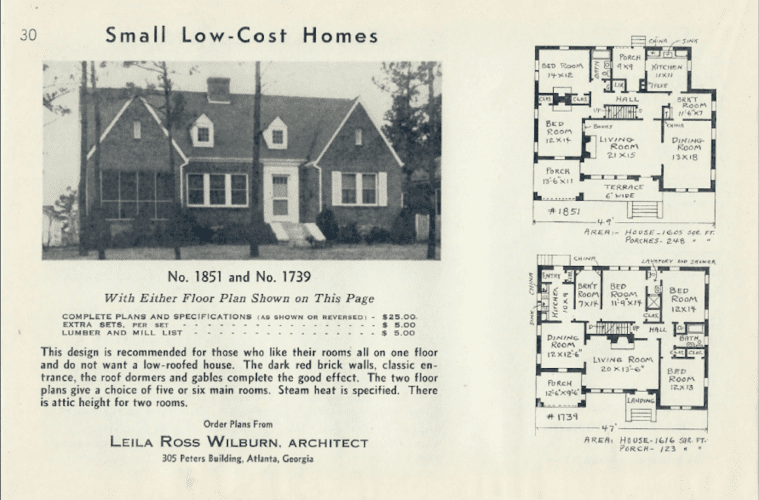 It began with an open house that author and historian Susan Hunter held in the early ’70s, when a guest remarked that her Ansley Park home had been designed by “a woman architect.” Intrigued, Hunter went down to City Hall and pulled the permit.

There she was: Leila Ross Wilburn.

The discovery marked the beginning of Hunter’s abiding fascination with Wilburn and a research project that culminated in 2018’s Southern Homes & Plan Books: The Architectural Legacy of Leila Ross Wilburn (University of Georgia Press).

The result of years of determined sleuthing and occasional luck, the book, coauthored by Sarah J. Boykin, shines a light on Georgia’s second female architect, a woman who has been all but forgotten since her death in 1967, despite being an important and lasting influence on the architectural character of Atlanta’s in-town neighborhoods and beyond.

Southern Homes & Plan Books is more than an exploration of Wilburn’s work, though. It’s a biography, a chronicle of the legacy of a remarkable woman and the study of home design as an expression of economic and social history.

“It’s [also] a journey through the history of urban and suburban development in the Southeast,” says Hunter — a journey Hunter will speak about on March 6 at the Dekalb History Center. It wasn’t easy for a woman to be an architect in the early 20th century. Most architecture schools, and thus architecture firms, were male only. But Wilburn, a plucky Decatur native, managed a successful end run around those obstacles. Rather than attend a professional school, she learned her trade by apprenticing with B.R. Padgett and Sons, an Atlanta architecture and construction firm. And instead of joining a firm, she set up shop herself in 1908, a sole practitioner at the age of 23.

During the early years, Wilburn made designs for different building types, but she later found her calling in designing home plans for prospective homeowners who couldn’t afford custom design work. It was her belief that quality design shouldn’t just be the province of the wealthy.

Wilburn sold these designs by publishing plan books — mail-order catalogs that contained basic floor plans accompanied by photo illustrations and text. She published her first plan book in 1914 and would put out eight more over the course of 46 years. The plan book wasn’t a new concept, but Wilburn was particularly successful, and with good reason: She had a superior product. Large windows for generous light, corner bedrooms for cross-ventilation and capacious proportions were among the hallmarks of her designs. So were architectural details, like trellises and gable windows, which gave her designs a distinctness and sense of individuality.

Wilburn was fortunate to have begun her career during a housing boom, but she was able to weather the ups and downs of world wars, the Depression and increasing competition, in part because she was a savvy businesswoman. For instance, she turned her gender, otherwise a drawback, into a marketing plus, claiming that as a woman, she knew better how to make a proper home.

Most importantly, she was quick to respond and adjust her designs to changing trends. Her craftsmen bungalows and colonial revival homes of the early years would give way to ranches and split-levels in the ’50s and ’60s. Similarly, she incorporated changes in construction technology, such as brick veneer and standardized windows, which saved her customers money.

Despite being well-known for much of her career, Wilburn had slipped into obscurity by the time Hunter encountered her name after that open house. It was through Wilburn’s sister Llewellyn that Hunter would learn about Wilburn’s papers at Agnes Scott College, the sisters’ alma mater.

“That’s when I saw that it wasn’t just my house,” Hunter says. “I started realizing what it was I had discovered.”

This marked the beginning of decades of research, of time spent digging through microfilm newspaper clippings, historical housing permits, family records and Wilburn’s plan books. And of driving around the city with Boykin, herself a preservation architect who had been conducting her own research, trying to match actual houses to models in Wilburn’s plan books — the MAK Historic District in Decatur, Druid Hills, Ansley Park and Midtown are prime locations for her work, but Wilburn’s reach extended out to towns and cities across Georgia, other Southern states and beyond.

As such, Southern Homes & Plan Books is equal parts a showcase of Hunter and Boykin’s monumental efforts, a record of Atlanta’s architectural history and a chronicle of one of the city’s most trailblazing women.