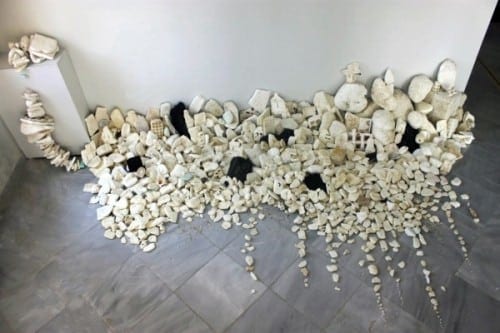 This is the first in a series of profiles of the four Georgia artists who are finalists for the Hudgens Prize: a $50,000 cash award and a solo exhibition at the Jacqueline Casey Hudgens Center for the Arts. A jury will select the winner on the basis of studio visits and a joint exhibition at the Hudgens Center beginning June 8. The stories will run on successive days, today through Monday.

Pam Longobardi had already established a successful career as a painter when a 2006 residency in Hawaii inspired a fruitful new direction.

While hiking, she encountered a beach awash in garbage from countless far-flung places. “The amount of stuff the ocean was vomiting out was extraordinary,” she recalls.

She immediately made the ocean debris a major focus of her art with the Drifters Project, begun in 2006 — the same year, she notes, that the National Oceanic and Atmospheric Administration established its Marine Debris Division.

As part of this new environmental research-based practice focusing on ocean plastic, Longobardi, 54,  has since undertaken similar “excavations” in a number of places, including the Greek island of Kefalonia, where she has had an ongoing relationship with the Ionion Center for Art and Culture since 2011.

“Plastic is a signifier of our time,” Longobardi declares, noting that the International Commission on Stratigraphy has been debating whether to officially designate a new geological era — the “Anthropocene” — to reflect the impact of human activity on the environment.

The artist, who cites Jacques Cousteau as a childhood hero, combs beaches and coastal caves, sometimes with a team of assistants, that are littered with thousands of plastic items. The act of removing the debris serves both to clean up the site — an activist gesture — and to provide her with raw material to recycle as art.

Some of it is arranged in floor installations: an oval formation of tattered remnants of shoes, or piled-up bits of eroded styrofoam that resemble chunks of coral, stone or bone. Fishing nets, cut loose by fishermen and left to drift in the sea, play a central role, serving as metaphor and armature in web-like installations that seem to ensnare all manner of objects.

Likening her process to that of a forensic scientist or archeologist, Longobardi documents the debris site with photographs, collects material, systematically identifies the objects and tags them like specimens. Her studio, adjacent to the Atlanta BeltLine, is spacious enough for file drawers and shelves that she fills with her finds. Pieces of fishing nets hang on the wall, and in the corner a pile of nets lies on the floor. 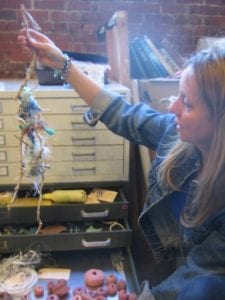 She points out a bundle of cigarette lighters found in a Greek cave. “These were the only ones in this case,” she explains. “Almost anywhere else in the world we’d find thousands of lighters, but in Greece they still use matches.

“Lighters are significant because the albatross mistakes them for food,” she explains as she thumbs through a book of Chris Jordan’s photographs that capture the horrifying results on Midway Island, decaying bird carcasses within which are visible colorful ingested plastic items: bottle caps, mesh, trinkets and so on, persistent and lethal.

One jar in the studio holds plastic “sand.” When these bits of broken-down plastic get to the size of plankton, Longobardi explains, they enter the food chain.

She intends to first seduce viewers, with appealing sculptural installations or wall pieces. “I want to talk about the material, but I can’t start with that, because people will turn away,” she says.

In a more literal group of wall works, the shapes of hand mirrors are formed by the arrangement of black plastic, which during beach cleanups often gets overlooked among lava. These seem to suggest that we “reflect” on the origin of their materials. In that regard, Longobardi’s work has a kinship with the Touch Sanitation and Social Mirror projects by Mierle Laderman Ukeles, another inspirational figure for her, as is Agnes Denes.

Longobardi’s painting at first appears unrelated to her environmental series, but there are subtle threads that connect them. “Being able to paint really grounds me,” she says. “Painting is the antidote to the installations, which are emotionally draining.”

Her large-scale copper paintings feature clouded grounds that appear by turns primordial and celestial. She achieves that effect, she explains, by “staging a battle” with liquid patinas that blend and cause the copper to oxidize in an organic, unpredictable way.

Mirroring the nature-culture dichotomy, she uses these murky areas as landscapes, adding tiny human figures and architectural structures in ink, oil and acrylic paint (that is, petroleum-based). Their diminished size recalls the Sublime tradition of 19th-century Romantic painting, in which nature is depicted as an overwhelming force.

Longobardi is the most widely exhibited of the four Hudgens finalists, having shown in galleries and museums in China, Italy, Spain, Finland, Poland, Japan, Germany, Greece and Monaco. Originally from New Jersey, she has lived in Atlanta since 1970 and is on the faculty of Georgia State University.

Among her upcoming projects is a group show during this year’s Venice Biennale, for which 12 artists will create installations on the island of San Francesco de Deserto. Another long-planned project is the GYRE research expedition in Alaska this June, with scientists and fellow artists Mark Dion, Alexis Rockman, Sonya Kelliher-Combs and  Andrew Hughes, photographer Kip Evans and National Geographic filmmaker J.J. Kelley. This will culminate in an exhibition at the Anchorage Museum in 2014. Longobardi will miss the Hudgens Prize exhibition opening, when she’ll be in Alaska.

It should come as no surprise that she doesn’t drink out of plastic water bottles or use foam plastic containers. She also totes her own bamboo eating utensils and likes to give reusable stainless steel drinking straws as gifts. For this artist, the medium and the message are one and the same.