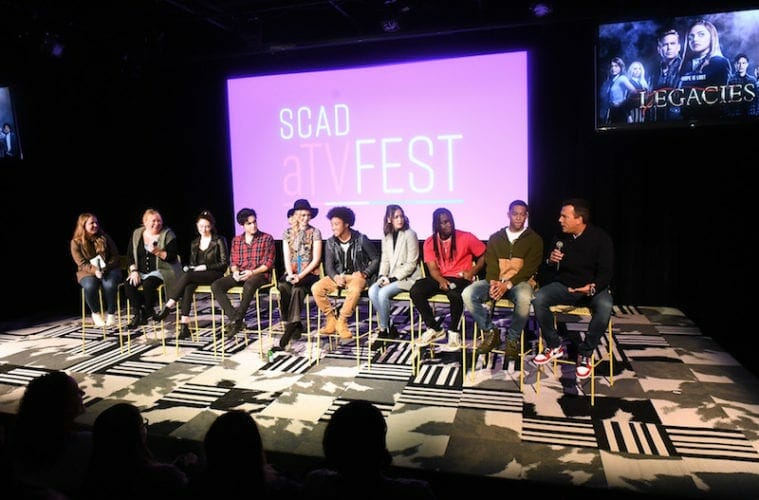 When SCAD Atlanta puts on a TV festival, it doesn’t do so half-heartedly. SCAD aTVfest — the only festival of its kind in Atlanta — held its eighth annual event February 27–29 with three days of screenings, panel discussions and plenty of headliners. As always, SCAD aTVfest showcased several Atlanta- and Savannah-filmed productions and alumni who have successfully entered the business.

The international event brings together those who work in front of the camera and those who work behind it to celebrate the latest in design, creativity and innovation in TV and media production.

Dynasty actor Elaine Hendrix, who took part in the Wonder Women: Acting for Television panel, grew up in Atlanta and attended what was known as Northside High School. She plays Alexis Carrington on the CW reboot of the famous prime-time soap opera, which is shot locally. Returning and seeing the change in the city has been eye-opening, she says.

“Filming here has been a great experience,” she says. “I have a certain familiarity with the area but so much of Atlanta is unrecognizable from what I remember. I am very happy to be here and enjoying my time.” Atlanta “has been a great platform for artists and actors and directors and writers and people who want to get into the industry without going to California and New York,” “The Resident’s” Malcolm-Jamal Warner says at SCAD aTVfest 2020. (Photo by Paras Griffin/Getty Images)

Also attending was Malcolm-Jamal Warner, The Cosby Show‘s Theo and now on The Resident (as surgeon AJ Austin), a medical drama now in its third season on Fox, and also filmed in Atlanta.

He says he’s been pleasantly surprised by The Resident’s reception. “The show has elements of Grey’s Anatomy but also has some darkness and it is unabashed in taking issues head-on in the medical industry,” he says. “We deal with the hierarchy of bigger companies taking over hospitals and risking patient’s lives to make a bottom line — that is real stuff and audiences gravitate toward that and get a glimpse at what is going on in the industry.” Warner also loves the series’ ensemble nature. “There is such a feeling of mutual respect and that makes coming to work an absolute joy. Everyone shows up with their A game.”

Warner now calls Atlanta his home and appreciates the growth he’s seen in the filmmaking industry. “There is a lot of work going on here,” he says. “It’s been a great platform for artists and actors and directors and writers and people who want to get into the industry without going to California and New York. The fact that Atlanta has been so welcoming has been great for us. There is definitely a willingness to work and learn from people who have been doing this for such a long time.”

Warner’s The Resident costar Matt Czuchry (Dr. Conrad Hawkins) was given the Maverick Award this year. Other winners included Eric McCormack of NBC’s Will and Grace, who received the Impact Award, and Justin Hartley (Kevin Pearson) of NBC’s This is Us, who received the 2020 Spotlight Award winner. Hartley admitted he relished the opportunity to visit Atlanta and hang out with actors from other series as well as SCAD students.

Shows that premiered at the festival this year included ABC’s musical comedy-drama Baker and the Beauty, the Savannah-shot NBC drama Council of Dad and the Fox comedy-drama Filthy Rich, featuring Kim Cattrall, who received the 2020 Icon Award. Filthy Rich is her first foray into network TV. Sex and the City, on which she played Samantha Jones for six seasons, aired on HBO.

Around every corner, it seemed, was an Atlanta angle. Tyler Perry Studios’ Mark Swinton, a producer and vice president of production and development, and costume designer Raiyonda Vereen, talked up their work on the upcoming BET+ series Ruthless. Stone Mountain native John Clarence Stewart (an Atlanta stage actor from 2010 to 2013) returned with actors from NBC’s new musical drama Zoey’s Extraordinary Playlist, which received the Rising Star Cast Award. Shows screened included the CW’s Atlanta-filmed Legacies, the supernatural series set at the Salvatore School for the Young and Gifted. It’s a spinoff from The Originals — itself a spinoff from The Vampire Diaries — and is now in its second season. Much of its cast attended.

Legacies cocreator Julie Plec offered several reasons for Atlanta’s popularity. “On a practical level, it doubles for a lot of different things,” she says. “You can be in New York City, small-town USA, any city in the U.S. You can have industrial or country and a lot of land and space. It hasn’t been overshot or oversaturated, like you would recognize every third block of Los Angeles. And the tax incentives allow you to put the money back on the screen.”

“I didn’t really know about SCAD until I moved to Savannah,” she says, “and now I’ve been working pretty much nonstop.”