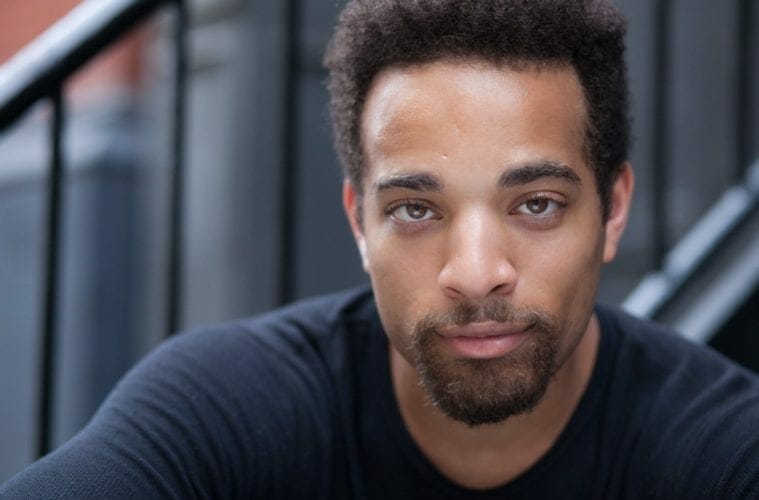 When we named John Clarence Stewart a "30 Under 30" artist to watch in 2013, he was acting in Atlanta theater, including the Alliance.

Editor’s note: In 2013, ArtsATL identified Stone Mountain native John Clarence Stewart as one of Atlanta’s “30 Under 30” artists to watch. When we spoke to him six years ago, he was 25 and preparing for a meaty role in the Alliance Theatre’s Choir Boy. He has since moved to New York and today has a busy TV career, including a major role as Alex in the Netflix series Luke Cage. Most recently, Stewart had a supporting role in the Netflix series What/If.

Each week, to celebrate our 10th anniversary, we’re republishing a story from our archives that sparked strong reaction from readers, showcased great writing or marked historical hallmarks in the evolution of Atlanta’s arts community.

Pointing out that John Clarence Stewart is an actor to watch seems a bit redundant. He’s an actor who’s bound to make Atlantans sit up and take notice.

Stewart first came to our attention in the intense three-man Civil War drama The Whipping Man at the Alliance Theatre in March. The 25-year-old Stone Mountain native and Shiloh High School graduate not only managed to hold his own with more experienced actors, he walked away with more than a couple of scenes. It was such a thoroughly polished performance in a hefty role that was surprising to learn it was one of Stewart’s first appearances on a professional stage. And it earned him a Suzi Bass Award nomination for best featured actor in a play. Atlantans who missed Stewart in The Whipping Man (also nominated for a Suzi award for best play) have a chance to see his work in one of the first don’t-miss productions of the fall season: Choir Boy at the Alliance, opening September 20. Set at a boys’ prep school in the South, the play by playwright Tarell Alvin McCraney examines issues of spirituality and sexual identity among young black men. It had an auspicious world premiere in New York in the summer, with a glowing review in The New York Times, weeks of sold-out performances and several extensions. Most of the New York cast is coming to Atlanta, and Stewart, who understudied in New York, will take on the suppportin role of AJ in the Atlanta staging.

ArtsATL: Tell us about your character, AJ, in Choir Boy.

Stewart: AJ, or Anthony Justin James, is a scholarship student at the Charles R. Drew Prep School. He plays baseball on a full scholarship. He’s roommates with the lead character, Pharus. They’re friends, and the dynamic in the room, it turns out to be the one place where Pharus can be himself unapologetically. Anthony thinks that Pharus is completely comfortable in the room and that they’re really open with each other. He doesn’t realize that even in the room, Pharus has his guard up.

It’s not until certain things happen that Anthony realizes how much of his guard Pharus has up. AJ gets the opportunity throughout the show to be a confidant of Pharus, who shows him friendship and acceptance in the midst of a school that is pressuring him to fit into a box, pressuring him to change. Anthony is accepting him for who he is. Through the show we realize why Anthony is so particular about doing that, about making sure he speaks to Pharus and is open to Pharus.

The story of Choir Boy is very relevant. It feels right for Atlanta. That’s really important for me in the projects I do. It tells a story that needs to be told. In Tarell’s writing, I see and I hear people that I know. I remember being in classes and being in church seeing these people. I see myself in these people. ArtsATL: It’s interesting that you recognize people you know in the play and that it’s important for you in connecting to a part. But The Whipping Man is set just after the Civil War. So you couldn’t really say, “I grew up with people just like this.”

Stewart: With John in The Whipping Man, I found myself connecting with “choice” — being a young man and being responsible for your choices. He was coming out of slavery, where he had responsibility, but he didn’t have choice. He could always blame somebody for the things that happened, because he had no choice. But then when he was free, all of the responsibility for the choices he made, like killing someone, he couldn’t blame [on] anyone but himself.

It parallels myself at 25 years old. I am my mother’s and father’s son, but I am my own man, and the decisions I make affect me in a profound way. And they affect the people around me. I can’t blame someone else no matter how I justify it. At the end of the day, I made the choice to do or not do. Choice is what really connected me with John.

Also, not having a father. I lost my father six years ago. It was right on the cusp of becoming a young man. I went through a period of wounding the people around me. I wasn’t aware that the choices I made affected people in the ways they did. I saw a lot of that in the character. I couldn’t say, “that time that I was a slave,” but I could connect with the thought of being bound by something. John Clarence Stewart (left, with Keith Randolph Smith in “The Whipping Man”) now lives in New York and has a TV, film and stage career.

ArtsATL: That must have been a dark place to go in your imagination?

Stewart: The thing is, I love roles and things that push me to dark places. I don’t know why. No one would really think that talking to me. I don’t give off that vibe of being a really dark person. My dad was a pastor, and I grew up very nourished, [in] a very loving family. The reason I do theater is so I can communicate with people, hold a mirror up to life. People can see an entire arc and can decide if they see themselves in those pieces, and if they want to make a change, they can. I don’t care how naive it is. I want theater to change things.

A lot of times when I do theater, I find that I myself change. I love jumping into other people’s shoes because I get to understand where they are in a way that otherwise I wouldn’t. It opens my understanding. It increases my empathy for all different kinds of people. Telling these stories, that’s my ministry. That’s the way I serve my community. If a character is going through a turbulent time in their mind or their heart, that’s why I go through it. It’s my responsibility to put myself in those shoes and to walk that story, so that other people can see that. Otherwise, sometimes people never get a chance to see their story, never get a chance to see the beginning, middle and end of action and consequence. I get the opportunity to show that.

ArtsATL: The character of John was pretty much your first big dramatic role on Atlanta’s most prestigious stage, and in a really weighty play, no less. That must have been a challenge.

Stewart: Yes, it was. I thought, “Who am I to be here?” For the first few table reads and discussions, I was really quiet. Then I realized my fear was coming from the fact that I felt that to be in the room with these people, I had to have an ego. I had to try to measure up to everyone. But strength comes from dropping that mess at the door and failing. Failing big. I felt free after that. The biggest challenge in that role was being.

That sounds like, “Oh, he’s trying to get really deep.” But I’m just talking about being onstage and breathing and being a human being. Not feeling like I had to push or entertain. It’s really easy for me to start feeling uncomfortable and wanting to “perform.” Standing, being and listening, not acting — that was the most difficult thing. But that’s what makes the still moments full. John Clarence Stewart (left) in his role in the Alliance Theatre’s 2013 “Choir Boy.”

ArtsATL: Can you tell us a little bit about your background and your path to becoming an actor? How did you become interested in theater?

Stewart: My mom always said if I could walk anywhere or run, I would always run. It’s just the way I was wired. I used that running in football and sports for years. A lot of my energy went into sports. My parents believed in exposing me to everything they could. I took piano lessons but didn’t stick with it. I regret it now. Kids, if you’re taking piano lessons, stick with it. I played violin for two days. And I played the trumpet for a while.

It wasn’t until the last semester of my senior year of high school that I got into theater. A friend of mine in math class was going to audition for a high school show, and he asked if I wanted to do it. I thought, why not. We were supposed to do a song, and I didn’t have one. The director asked me to sing “Happy Birthday,” so I sang that. And then they cast me in a musical. I played Papa Ge in Once on This Island. I loved it.

ArtsATL: What else is coming up in terms of your long-term goals?

Stewart: Honestly, after Choir Boy, I’m hoping for a Christmas show. That slot would be fantastic. I’m booked to do Lombardi at the Aurora, which starts rehearsals in January. After that, I don’t know. I want to go where the work takes me. I don’t care where that is. I haven’t done any TV or film, and that’s a great way to reach so many people. I’d like to get into directing at some point. I want to do so much.