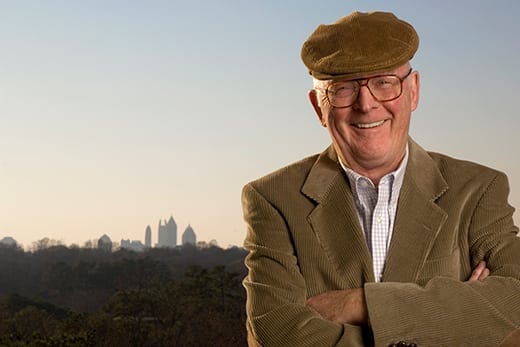 Emory's Dana White produced a television series on Atlanta history, and was at work on two books about Atlanta cinema.

Dana F. White, a popular Emory University educator and noted Atlanta historian, died November 24 from injuries he sustained after being struck by a car as he walked to his office on the Emory campus.

White, 82, had worked at Emory for almost 50 years as a professor of American studies. Although he had retired from the classroom in 2011, he remained a consulting curator with Emory’s Stuart A. Rose Manuscript, Archives and Rare Book Library.

An eight-part television series he created with urban historian Tim Crimmins for WPBA, The Making of Modern Atlanta, documented the city’s history from 1940 to 1990. White also curated exhibits at the Atlanta History Center that examined the city’s past, including “Four Cheers for Atlanta” in 1976 and “Gatheround: Stories of Atlanta” in 2016.

White was at work on two book projects with Emory film historian Matthew Bernstein: Segregated Cinema in a Southern City: Atlanta, 1895-1963, and an anthology, Atlanta at the Movies, that will explore the city’s film culture.

“Dana approached me over 20 years ago, he wanted to do something on Black cinema in Atlanta,” says Bernstein. “I thought the idea was fascinating, it seemed like a great way to learn about my adopted city. Dana brought the Atlanta history perspective to that project, and I brought the film experience.”

White and his wife, Patricia, had gone to Bernstein’s home for dinner the Saturday before his death.

“He delighted everyone who met him,” Bernstein says. “He was very dignified. He was really smart, with a very wry sense of humor. I got to teach with him four or five times in a course based on our research; he was a fabulous teacher.”

Bernstein and White were both native New Yorkers. White was born in New York City in 1934, and received his bachelor’s degree from Fordham University. He earned a master’s degree in American Studies from the University of Wyoming, then his doctorate from The George Washington University in 1970.

That same year, White arrived in Atlanta to teach jointly at Emory University and the Atlanta University Center. Over time, he would become an authority on Atlanta’s past. “Dana represented the best of any university, and especially Emory,” says Bernstein. “He loved learning about new things, new fields. He just dove in. He had a great appreciation of Atlanta’s history. He was fascinated by it.”

For Bernstein, the sense of loss is both professional and personal. “It was really a shock, he was just a fabulous guy,” says Bernstein. “I miss just hanging out with him.”

There will be a private service this week for family, and a celebration of White’s life is planned for the coming weeks. Donations in his memory can be made to the Dana Francis White Fund, Rose Library, Emory University, Atlanta, Georgia 30322; or to the Initiative for Affordable Housing, P.O. Box 855, Scottdale, Georgia 30079.