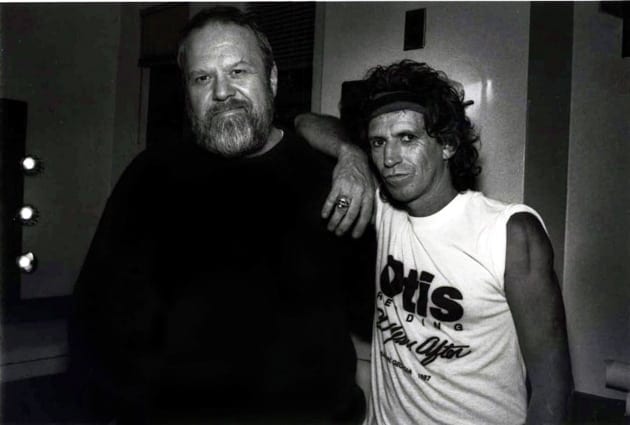 Promoter Alex Cooley held many distinctions during his decades-long career on the Atlanta music scene: a co-founder of Music Midtown, half of Concerts/Southern Promotions alongside Peter Conlon and, most recently, co-owner of Eddie’s Attic. The media even went so far as to once dub him the “Mayor of Music.”

But to so many who knew and worked with him, Cooley was simply a down-to-earth guy with a big heart for music.

Chuck Leavell, keyboardist for the Rolling Stones and formerly with the Allman Brothers Band and Eric Clapton, remembers first meeting Cooley in the early 1970s when he promoted shows at Alex Cooley’s Electric Ballroom and the Great Southeast Music Hall. That early introduction turned into a friendship that spanned 45 years.

“I liked him right off the bat,” Leavell says. “He was like a big ol’ lovable teddy bear. You knew right away that he had a passion for music, especially live music.”

He would go on to help save the Fox Theatre from demolition, create such musical venues as the Roxy, Chastain Park and the Tabernacle, bring thousands of acts to Atlanta with Concerts/Southern and, most recently, help revamp Eddie’s Attic.

His death has come as a big blow to the music community in Atlanta that he was instrumental in creating.

“Someone inevitably would have done what Alex did, but they wouldn’t have done it as well or with as much thought and concern,” says Conlon. “He really loved the city of Atlanta. And he changed the fabric of culture of this town.”

Cooley was a native Atlantan who attended Grady High School and the University of Georgia. As a young promoter, he helped organize shows for the Macon-based Capricorn Records, the legendary label where such Southern rock groups as the Allman Brothers and the Marshall Tucker Band came to fame.

Inspired by the Miami Pop Festival, in July of 1969 Cooley helped launch the first Atlanta International Pop Festival a full month before a similar slate of acts would appear at the most legendary festival of the ’60s — Woodstock.

“Alex had this big idea for a pop festival before anybody else was doing it,” says Cooley’s longtime friend and colleague Dave Scruggs, former manager of the Tabernacle, the Roxy and the Cotton Club. “People don’t realize the first Atlanta Pop Festival was before Woodstock. If you look at the lineup, it was just as strong, if not stronger.”

The following year, he put together a second pop festival in Byron, Georgia, that included a lineup of Jimi Hendrix, the Allman Brothers Band, B.B. King and Bob Seger. 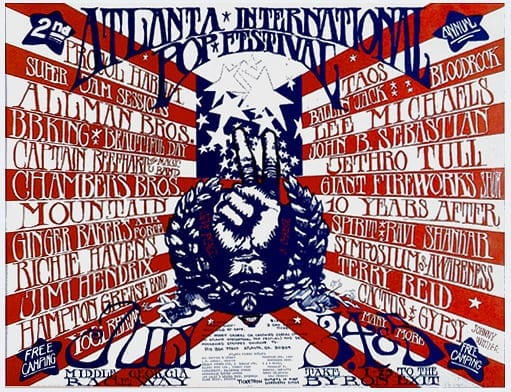 The second Atlanta Pop Festival was the largest gathering of people in Georgia history until the 1996 Olympics. And during an era where the South was still feeling the effects of segregation, Cooley brought in Jimi Hendrix to headline. Hendrix played for a crowd estimated to be up to 500,000, the largest American audience he ever played, only two months before his death on September 18, 1970.

Throughout the ’70s and ’80s, Cooley continued to push the envelope, bringing acts to Atlanta that many people considered fringe or counterculture. He became one of the most powerful concert promoters in the country, on par with Bill Graham in San Francisco and Don Law in Boston.

In 1974, Cooley opened the Electric Ballroom in the original ballroom of the Georgian Terrace Hotel. The venue, Atlanta’s first major rock music hall, booked such up-and-coming artists as Bruce Springsteen, Fleetwood Mac, Patti Smith, Stevie Ray Vaughn and the Ramones. Cooley was also the primary talent booker at the Great Southeast Music Hall, which catered to what became known as Americana music, but also hosted the first American show of the then-notorious British punk band the Sex Pistols.

According to Conlon, Cooley was willing to take the risk to expose Atlanta audiences to all different sorts of music.

“In the ’60s, people didn’t like him because he was bringing these hippie acts to town,” says Conlon. “But he was willing to take the heat. He saw the culture in that music, and it really changed the environment here.”

One of the biggest ways he transformed the cultural landscape of Atlanta was leading the charge to save Atlanta’s grandest theater. Plans were announced to demolish the Fox Theatre in 1974 because Southern Bell needed a parking lot. At one point, a crane with a wrecking ball was parked next to the theater, ready to knock it down.

Cooley helped found Atlanta Landmarks, a nonprofit organization to preserve, restore and operate the theater. Cooley not only booked benefit shows for the theater, he added a ticket surcharge to every concert there that went directly to purchasing and rehabilitating the building. The organization was able to purchase the venue in 1978.

“His concerts generated the money to save that place because it was going to go under the wrecking ball,” says Conlon. “He loved the building, the architecture. It would have been such a shame to make that a parking garage.” [For more on Cooley’s role in saving the Fox, see the video below.]

In the late ’70s, Cooley met a young Peter Conlon while Conlon was promoting benefit shows on the Jimmy Carter campaign trail. The pair developed a rapport and worked together for several years on various projects before establishing a formal partnership in 1981.

Their merged promotion companies turned into Concert/Southern Promotions, and the partners brought thousands of acts to Atlanta and ran such venues as the Roxy, the Cotton Club and the Tabernacle. In 1994, the pair debuted Music Midtown, which Conlon recently brought back to Piedmont Park.

“It was a very yin and yang thing,” says Conlon of their partnership. “We both had different skills and abilities. They meshed very well and we liked each other very much, so that helped.”

Despite his incredible success, for the people who knew Cooley best, one of his greatest legacies is in the way he treated people, be it young people who want to get into the music industry, his staff, fledgling artists or legendary musicians.

He was a beloved fixture at his favorite Atlanta haunts, which included Mary Mac’s and the Varsity. No matter where he went, colleagues say Cooley greeted everyone like an old friend.

“Everybody loved him and everybody had some kind of connection to him and some kind of story,” laughs Scruggs. “Most of the stories weren’t really true or remembered right. He told me ‘If I did half the things people tell me they remember I did, it really would be something.’” 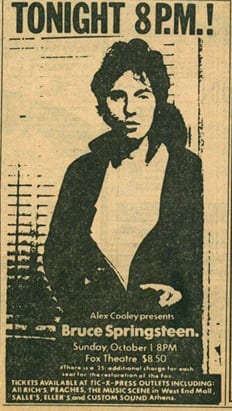 When it came to his career, Cooley established a reputation in the musical community for being driven mostly by his passion for music, not by money. In a business that is often cut-throat, Cooley was more interested in helping artists, no matter how big the crowd they drew.

“Bands loved working with Alex,” says Leavell. “As with all promoters, he sometimes lost money on a show but if he felt that the band had a chance to grow their audience, that didn’t deter him. He also treated his staff like they were his best friends and in turn, they gave him their best. Alex wanted everyone to win.”

After Conlon and Cooley sold Concerts/Southern to Clear Channel Communications (now called Live Nation) in 1997, Cooley was able to watch one of his earliest mentees, Conlon, rise to become the president of Live Nation Atlanta and one of the most powerful music men in the Southeast.

Cooley’s most recent young mentee is Eddie’s Attic talent buyer Andrew Hingley, who met Cooley by chance while he was trying to get a gig writing blogs in exchange for concert tickets to the Buckhead Theatre, where Cooley was consulting. Like he had with so many people over his career, Cooley connected with Hingley through music, rather than business.

The pair developed a fast friendship with many nights spent having dinner, talking about music and trading song recommendations. Though Hingley knew of Cooley’s reputation as a powerhouse on the Atlanta music scene, he says he’s just begun to understand the impact the man he considered a mentor and second father figure had on Atlanta.

“To be able to connect a city and connect people through music, that’s monumental,” says Hingley. “For me, that’s the thing I’ve heard the most about the last few days. Good god, the guy was special.”

When Cooley and Dave Mattingly bought Eddie’s Attic in 2011, he brought Hingley in as the talent buyer. But rather than being a silent partner in the venture, Cooley plunged right in, building a new sound system and installing a green room for the bands. He wanted to build on the legacy that Eddie’s had earned as perhaps the premiere small listening room in the South by making it even more friendly to artists, no matter how small an audience they were playing for.

“I think he enjoyed going back to the very roots of seeing musicians hauling their own gear up the stairs and traveling the country on a nickel and a dime just to pour their heart and souls out in front of a crowd, whether it was 10 or 20 people,” says Hingley. “I think something there must have connected with him.”

In a way, Cooley’s last stop in his career was the same place it began. Finding new artists and sharing them with the Atlanta community was a passion he never let go of.

“He just wanted to be relevant,” says Scruggs. “He wanted to stay in the game. He told me two months ago, ‘I’m going out with full speed. I’m going to be involved in as many things as I can as long as I can. It just keeps me alive.’”

One of the last things Cooley did was buy a tour bus with plans to travel the country and work from it. Despite a recent move to a rental home on the beach in Florida and being in ill health the past several years, Cooley was still active in the day-to-day operations at Eddie’s.

As early as last week, Cooley was checking in with Hingley to make sure Kristian Bush’s 14th annual post-Thanksgiving show went off without a hitch and that he’d book the venue again next year. At the moment, Hingley says, nothing at Eddie’s will change.

“I’m just going to make sure we continue on the projects that he started.” Hingley says. “I think the worst thing to do right now would be to change anything he had set in motion.”

To those in the music industry in Atlanta, the loss of Cooley is the loss of a legend — the gentle giant who built a music town from the ground up. But to people who knew and loved him, his death is the loss of a mentor, friend and father figure.

“I’ll miss him tremendously,” says Conlon. “He had a great affect on a lot of people and it was all good.”