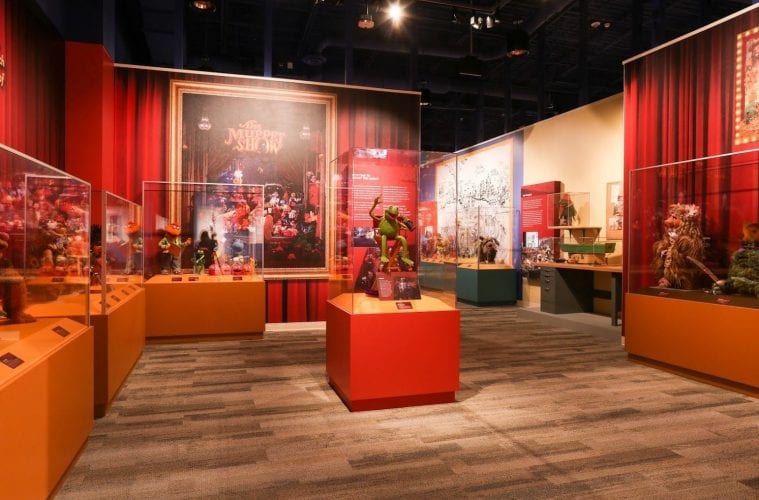 Kermit the Frog, one of Jim Henson’s most beloved creations, greets visitors.

The Center for Puppetry Arts recently opened its colorful new Worlds of Puppetry Museum. A much-expanded and rethought iteration of its original museum, the $14-million, 15,000-square-foot exhibit space comprises two parts: the Jim Henson Collection, a series of galleries featuring more than 75 artifacts, including some of the most familiar and beloved Muppet creations, and the Global Collection, which displays 175 puppets from around the world.

The old museum had its charms, but it felt somewhat cloistered. Visitors on their way to a puppet show could easily miss the peripheral and uninviting entrance, and the exhibit space was small, overly-stuffed, jumbled and maze-like. The urban alley-scene diorama at the entrance featured a trashcan that transformed into a menacing nine-foot phoenix, complete with flame-like lighting and screeching metallic sounds, which, though impressive, could be terrifying for small children, as likely to induce a lifetime fear of puppetry than delight.

That’s all very much in the past. The new museum is bright, fun and welcoming. It is also more dynamic than the old one, offering a variety of experiences, interactive displays and plenty of videos of puppets in performance. In 2007, Henson’s family donated more than 500 puppets and artifacts to the center, and its holdings are the largest and most significant in the world. Henson was the mastermind behind the Muppets, but he created much more than The Muppet Show and Sesame Street. What’s special about the new Henson Collection gallery is that it not only showcases some of the artist’s most familiar creations, but also shines light on other fascinating aspects of his 35-year career.

Especially illuminating are screens showing his pre-Sesame Street work in television advertising. The ads are delightfully weird and indicative of the 1960s, and one can easily trace the developing humor, speed, invention and playful sense of the absurd — so useful to Madison Avenue at the time — that were to become hallmarks of the Henson style. The Creature Shop, where the Muppets were made. (Photo by Sara Hanna Photography)

In space devoted to the Muppet workshop, visitors get up close to the elements that make a Muppet — the googly eyes, foam, fabric and other material — offering a tangible understanding of the magical process that turned ordinary, inanimate objects into lively, idiosyncratic TV stars.

Artifacts are safely encased behind Plexiglass, of course, but various displays invite visitors to interact, most memorably in the Sesame Street room where a mock TV set, cameras, screens and puppets allow kids to try their hand (literally) at operating the puppets without appearing in the camera shot. (There were no kids around when I walked through, so I gave it a shot: It’s a deceptively tricky skill!) Later rooms offer glimpses of Henson’s creations for other work, including fun creatures from his cable TV series Fraggle Rock and such films as The Dark Crystal and Labyrinth, as well as less familiar projects. An interesting display shines light on the curious Muppet Show pilot of 1975, uncharacteristically entitled Sex and Violence, and featuring a pageant based on the seven deadly sins.

The Global Collection represents five continents and many centuries and a diverse array of puppet types. From American marionettes and Chinese shadow puppets, and life-size figures from a 1982 production of Alice in Wonderland, to an antique Punch and Judy, from the colorful characters of French Guignol, and Vietnamese water puppetry, the scope and variety in the galleries are fascinating. A view of one of the Global Collection galleries.

Visitors have the chance to manipulate Sicilian rod puppets or turn a little dial to see the various phases of creation for the animation for the 2009 film Coraline. Videos show the puppets in motion, which is a crucial counterpoint to the static display of artifacts, and interviews with experts and puppeteers yield fascinating insights.

The multitude of objects, information and videos can, however, lead to sensory overload. Kids and adults alike may end up wanting to take in the museum through repeated visits, which is actually, in the long run, a benefit. There’s a lot to see, and families that make return visits will undoubtedly find enough to keep everyone occupied, discovering little hidden gems and personal favorites.

Unfortunately, the new construction that houses the museum does nothing to enhance the center’s curb appeal or its contribution to street life. Quite the opposite: The harlequin pattern on the exterior may be fitting, but the windowless and slab-like walls shut the building off from Spring Street. As in the past, visitors, whether on foot or in car, enter via the parking lot behind the former school building; it’s like going through a back door rather than a suitably grand, urban and accessible entrance.

I also have concerns about the placement of African-style puppets from Disney’s Broadway production of The Lion King very close to puppets of genuine African provenance. The primary mode of the “Global” side of the museum is anthropological and historical. To place commercial, mimetic objects so near to — and under-demarcated from — the genuinely African pieces seems a serious misstep.

Still, overall, the bright, spacious new museum is a welcome addition to the Center and to Atlanta’s ever-evolving cultural offerings. The universally appealing and significant Henson collection could have easily ended up anywhere in the world, so Atlanta is fortunate to have it, and doubly fortunate that it is displayed so engagingly.