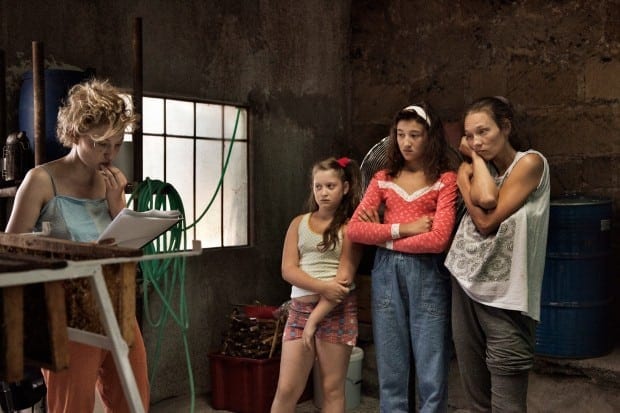 In director Federico Fellini’s La Strada, his heroine Gelsomina deals with a brutish husband who crushes her spirit. The Gelsomina of The Wonders (Maria Alexandra Lungu) also has a brute to deal with, but it’s her father. He’s as well-meaning as he is awful, equally scary and comical as he staggers around his farmhouse in jockey shorts. But there’s not much chance that he’ll be able to crush his quietly centered, steadfast 12-year-old daughter.

She’s the heart of this family, even, at her young age, its leader. The family is a hippyish conglomeration, slung up in a slice of Italy’s Tuscan countryside that’s less lovely than the guidebooks tend to show us. They’re beekeepers, living in a rented, ramshackle stone house.

Dad Wolfgang (Sam Louwyck) is German, married to Angelica (Alba Rohrwacher, sister of director Alice Rohrwacher). Their children are four daughters, but the only two you need to care about are Gelsomina and the next oldest, Marinella (Agnese Graziana), who’s as willful as Gelso is disciplined.

The family basically lives off-the-grid, surviving through a rural work ethic long since abandoned by most of the rest of the world. So when a television competition-cum-reality show called Countryside Wonders turns up in the area, Wolfgang wants nothing to do with it. The girls, however, are entranced.

That’s because they stumble on a TV promo being shot in nearby Etruscan ruins. Hostess Milly Catena (Monica Bellucci, having fun in a tacky, white faux-Fellini gown and wig) explains that seven families of local farmers and their respective harvests will be chosen for the competition. In the words of the sponsors, “The one that represents our traditional values best will receive a bag of money.”

But Wolfgang thinks “traditional values” should not be sullied by television exposure and the reductive, tourism-porn culture that brings so much money to Italy at large. He doesn’t want anything to do with the contest (though he could definitely use the money). That’s when we see that, despite his bluster, the family is truly an enterprise run by its young women. Despite dad’s objections, they start renovating the farmhouse to meet the sanitation codes necessary to qualify for the competition.

Meanwhile, Wolfgang takes in a troubled foster kid named Martin (Luis Huilca). He does it to earn money from social services, but he’s also very open about his disappointment that all of his children are girls. He wants a boy to help with the bees.

“When he’s not here, we can breathe, right?” Angelica says on a swimming trip with her daughters. It’s basically the only time she comments on her husband’s domineering but often ineffectual presence.

This summary may suggest that The Wonders is more plot-driven than it really is. The movie is a delicate, elliptical thing — a string of coming-of-age observations poised between the mundane and the mystical. (I was reminded sometimes of the 1973 Spanish classic The Spirit of the Beehive because of the movies’ moods, not because of the bees.)

Things lurk unspoken around the edges — the impending puberty of Gelsomina and her sisters, and the world, or worlds, they will have to choose to enter or to renounce when they have the agency to do so. Winner of the grand jury prize at the Cannes Film Festival last year, the movie will likely irritate as much as entrance some viewers. It’s as enigmatic as the brief, bewildering transition from childhood toward maturity. At the end, I felt a little unsatisfied, but a little haunted, too.