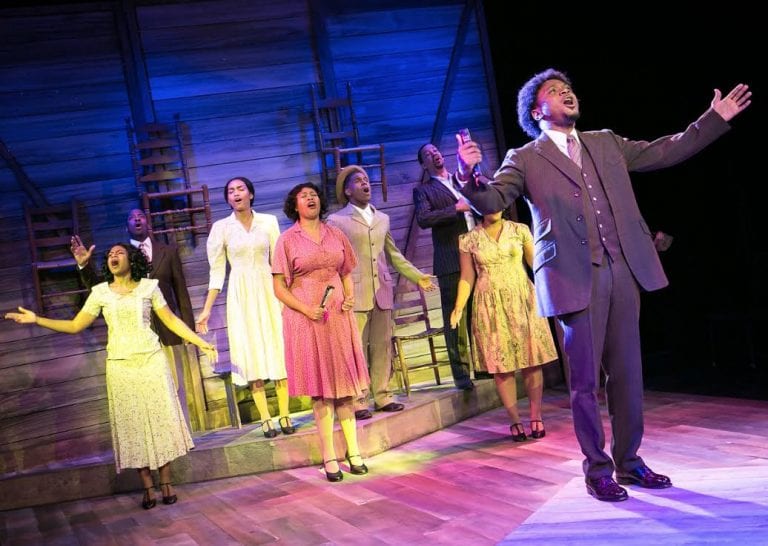 The Color Purple was this year's most celebrated production at the Suzi Bass Awards. (Photo by Casey Gardner)

Actor’s Express took home the biggest prizes at Monday night’s 14th-annual Suzi Bass Awards for local theater at the Conant Performing Arts Center. The company received 11 Suzis, including Outstanding Musical for its production of The Color Purple and Outstanding Play for Angels in America.

The organization also gave Lifetime Achievement Awards to Liz Lee, producer at the Center for the Puppetry Arts, and Rosemary Newcott, the long-time Alliance Theatre director and the company’s artistic director of theatre for youth.

Isabel and Moriah Curley-Clay received the award for Outstanding Scenic Design for Citizens Market at Horizon Theatre. Their win was hardly a surprise — the sisters received five of the six nominations in that category for their work at various theaters.

This year’s winners also include the following:

Outstanding Male Lead Actor in a Play: Lee Osorio for The Life and Death of Richard the Second at Atlanta Shakespeare Company

Outstanding Supporting Male Actor in a Play: Enoch King for The Christians at Actor’s Express

Outstanding Male Lead Actor in a Musical: Haden Rider for The Hunchback of Notre Dame at Aurora Theatre and Theatrical Outfit

Outstanding Acting Ensemble in a Musical: the cast of Always . . . Patsy Cline at Atlanta Lyric Theatre