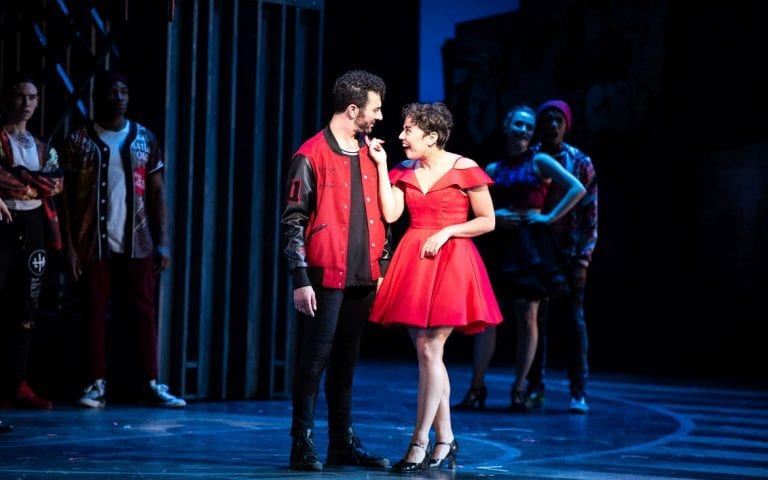 In the mid-1950s, the Upper West Side neighborhood in New York City was an ethnic, blue-collar neighborhood. That character changed dramatically when urban renewal and the creation of the Lincoln Center began in the early 1960s. It’s the area’s displaced street gang culture of the 1950s that forms the backdrop that underlies West Side Story, the iconic piece of American lyric theater that opened The Atlanta Opera mainstage season on Saturday at the Cobb Energy Performing Arts Centre. Four more performances remain this week: tonight, Tuesday, November 6, and Friday through Sunday, November 9, 10 and 11.

This “must see” show is a powerhouse coproduction of The Glimmerglass Festival, Houston Grand Opera and Lyric Opera of Chicago. Its intention is to recreate the complete, original 1957 Broadway production as conceived, directed and choreographed by Jerome Robbins, who came up with the idea and engaged composer Leonard Bernstein to write the musical score and Arthur Laurents to write the book. Stephen Sondheim was ultimately brought in to write lyrics.

Essentially a modern, Americanized remake of Shakespeare’s tragedy Romeo and Juliet, the rivalry of two teenage street gangs in West Side Story, the Jets and the Sharks, parallels that of the Montague and Capulet families in the Bard’s play. Their conflict is heightened and brought to crisis by the catalytic presence of ill-fated, star-crossed lovers who each belong to opposing rival groups: Tony, a former Jet and best friend of Riff, the gang’s leader, falls in love with Maria, the sister of Bernardo, the leader of a Puerto Rican gang, the Sharks. Maria has been brought to America for an arranged marriage with Chino. Maria and Tony instantly fall in love at a school gymnasium dance, and the tangled situation unravels from there.

The music for West Side Story comprises Leonard Bernstein’s best known work, both in song and in symphonic concert form, especially the Symphonic Dances from West Side Story. While many arts organizations have celebrated the centennial of Bernstein’s birth this year, it is also the centennial of Jerome Robbins’ birth. From the opening curtain, it was Robbins’ emphatic choreography, recreated here by Julio Monge, that set up the backstory and tone with a carefully crafted confrontation between the gangs, before any single character was individually introduced.

Extensive dance sequences throughout the production moved the story forward, as did the excellent playing of Bernstein’s complex, engaging score by the Atlanta Opera Orchestra, led by conductor David Neely. Scenic designs by Peter Davison were engaging and effective, and production director Francesca Zambello, general director of The Glimmerglass Festival and artistic director of Washington National Opera, drew the staging together like a well-oiled machine.

As the young protagonist Tony, Andrew Bidlack is convincing in his character and easily floats the highest lyrical notes demanded — such as those in the song “Maria.” Soprano Vanessa Becerra plays the ingenue role of Maria, but while looking and acting the part, her voice has a bit too much warble in the upper register, with a weaker low end. That left the energetic Amanda Castro as the strong presence among female principals, with her more “theatrical” singing voice. Becerra got her own high point of the evening in her duet with Castro, “A Boy Like That/I Have a Love” — an atypical kind of duo for an American musical of that era. Castro was on fire as singer, dancer and actor in multiple numbers, “America” being one fine example.

DJ Petrosino as Bernardo and Brian Vu as Riff were strong sparring partners as opposing gang leaders, with fine support from Brian Wallin as Chino, Schyler Vargas as Diesel and Connor McRory as Action, among the other gang members. Including the principals, there were 15 Jets and 14 Sharks, male and female, in the ensemble, each of whom the creators had given a specific name and character, rather than just anonymous members of a chorus. The character of their combined singing was well suited to the production. No one would expect them to sound like a Russian Opera chorus, which would be wrong for the musical’s context. Instead, they displayed a good balance of singing, acting and especially dancing skills, which, while not a common combination in the demands of traditional opera, are totally imperative for West Side Story.

The Atlanta Opera’s performances come at an unusually sensitive political time in our country with mid-term elections creating an already heightened sense of civic tension, and show that the social themes of West Side Story have continuing relevance.

Adding to that was the bigger shock of the evening, never before present at an Atlanta Opera performance: the presence of metal detection arches that audience must pass through and security guards dressed in black uniforms with wands and “place your feet here” mats — like the TSA gates at airports.

The situation led Atlanta Opera’s artistic and general director, Tomer Zvulun, in his preshow introduction from the stage, to quip, “I’m thrilled I made it through security,” to which the audience responded with both some laughter and significant applause. Spokespersons for both The Atlanta Opera and Cobb Energy Centre have confirmed to ArtsATL that this heightened security is the “new normal” for events at Cobb Energy.

Ironically, the compounding feeling of duress from this draconian security played directly into one of the uneasy themes of West Side Story: beyond the animosity of the rival Jets and Sharks for each other, they share common resentment for the heavy-handed authority of the police, which perhaps fueled the conflict as much as put a cap on it, as played out especially by the bigoted Lieutenant Schrank (Zachary Owen) and beat patrolman Officer Krupke (C. Augustus Godbee).

These are fully half of only four adult characters in the story, the others being Doc the pharmacist (Rial Ellsworth), the closest thing the boys might have to a common father figure, and the clueless, out of touch if well-meaning social worker known as Glad Hand (Brady Dunn). They were grossly outnumbered as adults by the hot-tempered teens, unable to change the fatalistic outcome of a gang war. Perhaps that should stand as a cautionary lesson to be learned for our own divisive times.