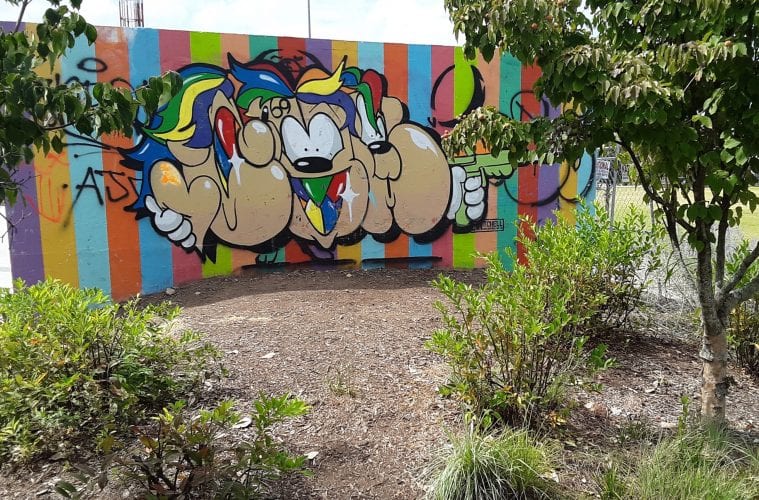 News: “Rainbow Pupper” mural has a new home on the BeltLine

Rainbow Pupper, the puppy dog that sparked a turf war, officially has a new home.

In mid-August, Atlanta artist Linda Mitchell painted Rainbow Pupper on the back of a skate ramp in the Old Fourth Ward Skate Park as part of the annual Art on the BeltLine program. Just five days after she’d completed the mural, it was defaced. 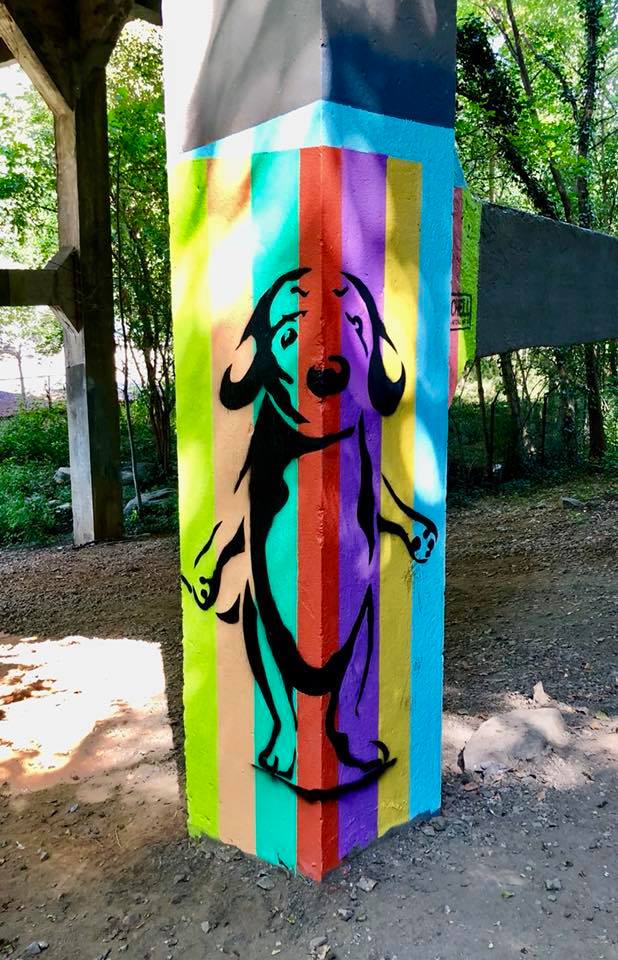 Rainbow Pupper was defaced in his first home at the Old Fourth Ward Skate Park, but the mural now has a new home (above) beneath Park Drive on the interim BeltLine Trail near Piedmont Park. (Courtesy Atlanta BeltLine)

As reported by ArtsATL contributor Doug Deloach, the skate park is located approximately on the same spot where once stood a decaying concrete industrial parking lot and loading dock, which was commandeered by skaters in an outlaw occupation more or less tolerated by city officials. A city-sanctioned skate park opened on the site in the spring of 2011.

From the beginning, the back of the skate park’s most prominent feature, the vertically sloping wall on which skaters perform trick maneuvers, was recognized as a prime target for street artists. A first mural for the wall, commissioned and completed in 2011 by popular street artist Never, had become faded and tagged over the years.

During preparatory discussions for her mural, BeltLine officials indicated to Mitchell the likelihood that some members of the skater/graffiti community might find her project unwelcome. Nevertheless, when she was told only a few days after completing her mural that the work had been tagged to the point of near obliteration, she was angry and frustrated.

Mitchell and a group of volunteers cleaned the tags off of her mural on August 28, but shortly afterward, it was defaced again.

Mitchell was given a new location for Rainbow Pupper on the interim trail near Piedmont Park’s dog park under the Park Drive bridge. “We are still in talks with the local skater eco-system, the parks department and the community about the next creative iteration of the vert ramp,” says Miranda Kyle, arts and culture program manager for Atlanta BeltLine, Inc.

Mitchell completed the new version of Rainbow Pupper on September 20. “I had to get a bit creative with wrapping the image around the pillar to make him as large as possible on the smaller wall space,” says Mitchell. “I’m sad that the first incarnation didn’t survive at the Skatepark, but I’m delighted that my Pupper is back.”