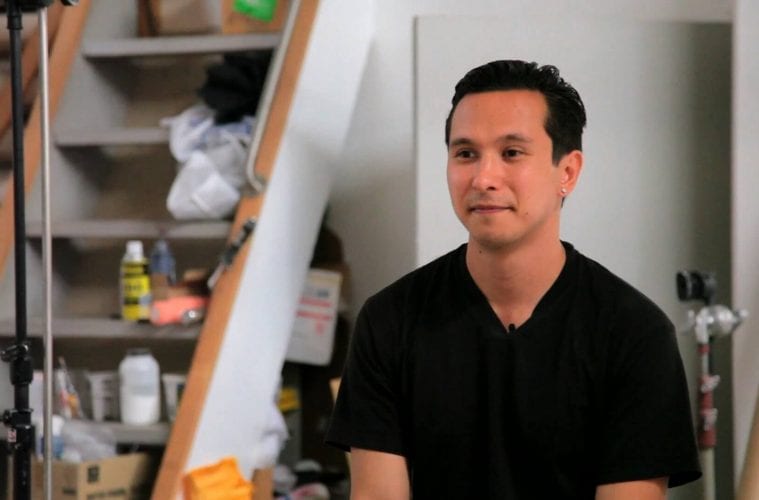 Jackson Fine Art has announced a dual exhibition of acclaimed photographers Matthew Brandt and Ruud van Empel at the end of this month. Both Brandt and van Empel have built their reputations on challenging the preconceived notion of traditional photography. Brandt, who has long described himself as “a little bit messy and experimental,” produces large-scale photographs that hail back to the more labor-intensive processes of 19th-century photography’s origins, often incorporating the physical matter of the subject itself in the pursuit of conflating subject and material. With 1864, his first exhibition at Jackson Fine Art, Brandt reinterprets George N. Barnard’s photographs of post-Sherman Atlanta by making images of a shattered city into a peach pie, not dissimilar from 2014’s Dust, which also reproduced historical photographs. In that collection, he rendered the pigments from debris collected at the sites of the demolished buildings. In Brandt’s first monograph, Lakes and Reservoirs (2014), which was co-published by Damiani and Yossi Milo Gallery, he bathed his landscapes in the water of their subjects. Brandt’s work is in the permanent collections of Metropolitan Museum of Art, New York; National Gallery of Art, Washington, DC; J. Paul Getty Museum, Los Angeles; Brooklyn Museum, New York and elsewhere. He was one of seven artists featured in the 2015 exhibition at the J. Paul Getty Museum, Los Angeles, Light, Paper, Process: Reinventing Photography.

Brandt began working on 1864 in early 2017, informed by a February visit to Atlanta (his first) and a fascination with the online catalog of the Atlanta Journal-Constitution. Fortifying the foundational ingredients of the 19th-century albumen print — egg whites, silver nitrate and salt — with peaches, sugar, flour, cinnamon and butter, Brandt plays with external assumptions about the South, at the same time evincing a complex understanding of the history his project excavates. Georgia’s reputation as the Peach State, now tenuous, calcified in the three decades following the Civil War. Brandt’s large-scale photographs of the ruins of Union Depot, once situated between Pryor Street and Central Avenue, or Confederate Peachtree Street (then Whitehall), compress time, creating a symbolic conversation at turns funny and reverent, and loaded with unexpected associations.

1864’s landscapes will be exhibited alongside a series of still life peaches. These photographs were processed with the same peach pie recipe as the Barnard images, but composed using Styrofoam fruit made in China and purchased from eBay, in a gesture that situates the project squarely in the present.

Ruud van Empel’s striking large-format photomontages apply painterly precision and detail to a medium often derided in contemporary fine art photography — the digital composite. His youthful subjects and lush settings do not exist outside of van Empel’s Photoshop workspace, where the artist utilizes his own photographs of models in different settings and a large collection of images he has collected over time to create complex portraits of startling realism, marked by a tinge of the uncanny.

In World, van Empel depicted innocent subjects adrift in elaborate natural settings, evoking magical realism and the pastoral children’s portraits of the German painter Otto Dix. Portraits, van Empel’s third exhibition at Jackson Fine Art, draws on two new series for which van Empel shifts away from the straightforward fantasy of earlier bodies of work in favor of a psychological contemplation of his subjects. Mood and Analogy recall van Empel’s Dutch artistic heritage through classically posed portraits reminiscent of painted miniatures and distinguished by dark, earthy tones and dramatic chiarrascuro. Van Empel’s young inventions appear not lost in the world, but living in it, with all of the complexity and depth that entails.

Van Empel was recently recognized as Artist of the Year 2017 by the American Friends of Museums in Israel. Born in Breda, the Netherlands, he went on to study at the Academie St. Joost and initially work in commercial graphic design and videography. Van Empel’s work is collected by numerous institutions worldwide, such as the C-Photo Collection in London, the Chaney Collection in Houston, the George Eastman House in Rochester, the Tel Aviv Museum of Art, the Joods Historisch Museum in Amsterdam, the Sir Elton John Photography Collection, MoPA Museum of Photographic Arts in San Diego and the Alturas Foundation in San Antonio. He is also the recipient of several awards, including the Municipality of Breda Oevre Award in 2013. Van Empel currently works and lives in Amsterdam, the Netherlands.