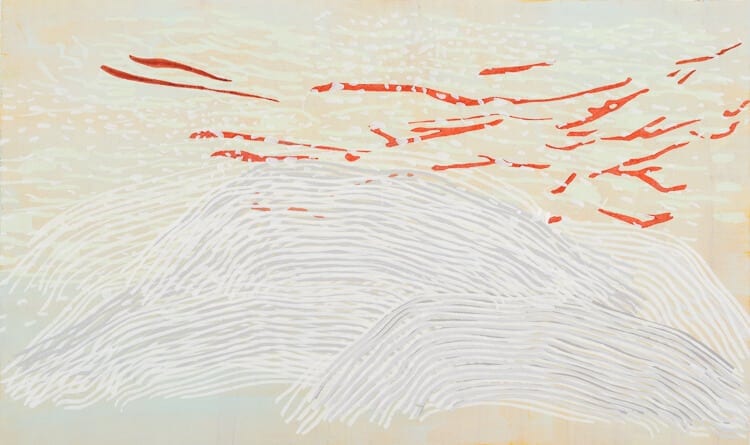 Review: “My One and Only” presents a bevy of distinct approaches to monoprinting

Organized so that it coincided with the SGC International Printmaking Conference that was held this year in Atlanta, Mason Fine Art’s My One and Only features monoprints by 10 women artists (up through April 14). The artists treat disparate themes — yet, they share an interest in nature and chance. Such notions find an easy ally with the monoprint process, which tends to be more spontaneous and akin to painting than other, stricter methods. Making them most distinct from other print techniques, monoprints can’t be replicated — a fact cheekily alluded to by curator Terri Dilling’s clever title.

A heavy use of nonobjective pattern links the 10 artists’ work. Some lean toward an amorphous, painterly aesthetic, and others tend toward a graphic sensibility. Representing the former, Isaiah Erin Jones, an Emerging Artist Resident at the Atlanta Printmakers Studio, works in dense, cloudy layers. Interested in water, her tenebrous and moody imagery recalls a stormy sky.

Established Atlanta artist Eleanor Neal developed a process of printing from moss. She uses curled lines and soft shapes to create her Untitled images — simultaneously evocative of growth and decay. Neal credits the influence of stories of Caribbean and Gullah female warriors; however, there is no overt relationship between her nonrepresentational, nebulous images and these narratives. Neal, like Laura Fayer, excels at using surface layers to create a rich, near-formlessness visual language.

Interested in time and narrative, Debora Oden, a professor at SCAD’s Savannah campus, works in dense, amassed passages of hatched line. The Bridge shows alternations between built-up pigment and scratchy, reductive marks. Its heavily worked surface is among the more painterly images in the exhibition. Seattle artist Amanda Knowles uses overlapping shapes, especially circles, to suggest contemplation, the process of returning again and again to a memory to understand it. Tracing suggests the processing of thoughts as they develop, translating time into space and thoughts into simple form. Background layers are soft and hazy; foreground imagery is more defined. Abstraction suits her cerebral subject.

Susan Ker-Seymer maintains a studio at the Goat Farm Arts Center and studied fashion early in her career. It is no surprise, then, that her work for My One and Only recalls surface design, tending toward allover compositions and strong color. An appealing accumulation of translucent geometric forms, Aspect Aerial II looks a little like a rich plaid.

Tulane MFA candidate Cassie Normandy O’Malley made Let Your Tenderness Show by using two sides of a piece of inked fabric to make near-symmetrical images that differ in color variation and intensity. Organic shapes overlap and accumulate to form complex forms on a pristine white background. The bright colors and leafy, amoebic shapes evoke Matisse’s paper cut-outs of the 1940s.

Combining digital photographic techniques with more conventional print processes, Richmond, Virginia-based artist Tanja Softic’s Augury is a dual image: one half shows a cropped segment of branches in silhouette, the other a gridded image of a vortex. Given the title, the paired images suggest unseen natural forces. The delineated natural forms have a specificity that much work in My One and Only eschews.

Perhaps the most pop-influenced work belongs to Atlanta-based Stacie Rose, a self-described collector and explorer. Rose cites travel as a crucial influence that sparked an interest in what she describes as “our universal sameness.” She works in clean and crisp layers, often evoking Roy Lichtenstein’s signature Ben-Day dots and bright colors and graphic reproductions of gestural marks.

Adjacent to My One and Only is Vitality, a selection of recent paintings by curator Terri Dilling. A prominent Atlanta painter and printmaker, Dilling is interested in natural cycles. Her practice of building paint up from smeary underpainting to scribbles to defined, screen-printed patterns in Attuned suggests organic growth. The juxtaposition of defined, more geometric pattern and amorphous underpainting recalls the biomorphic surrealism of Joan Miro, whose nonobjective imagery simultaneously conjured cosmic and cellular life. Dilling’s rigor and training as a printer shows — even in her paintings.

Dilling’s interest in nature seems to have guided her selection of the other nine artists represented in My One and Only. Yet, perhaps more pertinent than this shared inspiration is the shared experimental attitude toward printmaking. Each has developed a unique process that is utterly her own.