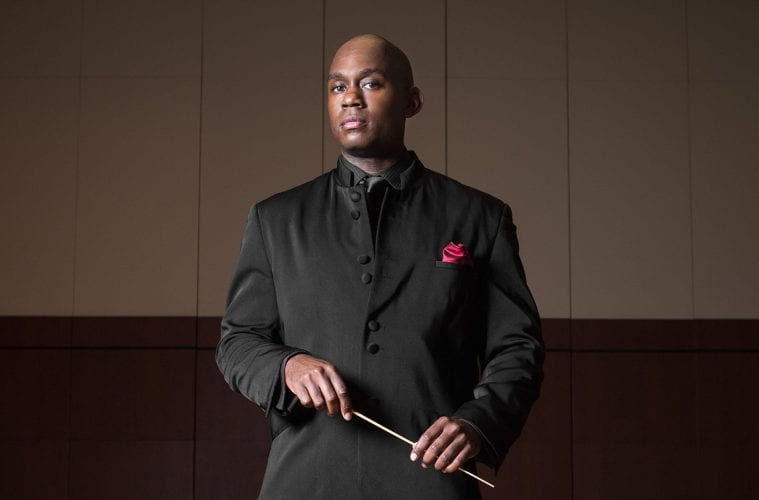 The Atlanta Symphony Orchestra has named Joseph Young, a Charleston native who turns 32 in April, to be its new assistant conductor and director of the Atlanta Symphony Youth Orchestra. Young will succeed Jere Flint as ASYO music director. Flint will retire from his jack-of-all-trades career with the ASO at the end of this season: 47 years as a section cellist, 39 years as staff conductor and 35 years as ASYO music director.

Young, whose most recent professional post was resident conductor for the Phoenix Symphony, is the ASO’s first African American assistant conductor. He will begin his new post with the ASO on June 1 under an initial one-year contract. As ASO assistant conductor, Young will assist in the artistic leadership, serve as the primary conductor for educational and community concerts, and will lead the youth orchestra.

“It wasn’t until I won the position that I learned I would be the first African American assistant conductor,” Young said. “It certainly is part of the organization’s history, just as the first woman to have this role is also part of its history. But this position is an honor for any young conductor, and to conflate the two presents me with a great sense of pride.”

Young made his professional debut in 2007 with the Baltimore Symphony Orchestra under the auspices of a BSO–Peabody Institute Conducting Fellowship that lasted through 2009. He then spent a season with the Buffalo Philharmonic as an assistant conductor and League of American Orchestras Conducting Fellow. But it was his time with the Phoenix Symphony that laid a solid groundwork for his upcoming position with the ASO, as Young noted in a phone interview with ArtsATL.

“Phoenix was my first full-time job,” said Young. “It was the first time I had a leadership role artistically with an orchestra. I owe a lot to that orchestra because they gave me a lot of different chances on the podium.”

At the same time, he was the head of the Phoenix Symphony’s Education Department. He developed the department’s overall vision, and was in charge of planning the orchestra’s educational programming. Young with Jere Flint, who retires at the end of the season.

“I am so excited and honored to be joining the Atlanta Symphony Orchestra’s artistic team alongside Robert Spano and Donald Runnicles,” said Young, adding the orchestra is known for its world-class musicians and innovations. “And I’m looking forward to learning as much as possible because the role of assistant conductor is you do so much, but you learn so much as well.”

Young said he is especially eager to do community outreach and educational programs. “It’s an opportunity for me to share with young people the importance of being passionate about something [such as] arts, music or science,” he said. “It’s a chance to share how I grew from failure and rejection, and the significance of being patient and resilient on any career journey. I understand the story of my success might be most impactful in the African American community of Atlanta, but I believe my story will be inspiring for everyone.”

“Joseph is a very talented conductor and an extremely nice young man who will fit beautifully into the educational programs and ASYO,” Flint said in a press release. “I leave these very important aspects of the symphonic world in very capable hands.”

“Joseph’s job is going to be different from what we’ve had in the past,” said Mirageas, noting the orchestra’s last assistant conductor hired fully by the ASO was Alexander Mickelthwate. Laura Jackson and Mei-Ann Chen were conducting fellows subsidized in part by what is now the League of American Orchestras.

The history of shifting the roles of assistant conductors goes back to the late 1960s and Robert Shaw’s personal pick for assistant and later associate conductor, Michael Palmer, who also founded the youth orchestra. When Palmer left in 1977 to become music director of the Wichita Symphony, he was followed by two conductors: Exxon/Arts Endowment Conductor Sung Kwak and Louis Lane. Kwak departed in 1980, and Lane retired three years later. Flint took over direction of the ASYO.

“After Louis Lane retired from the orchestra, we didn’t have either an assistant conductor or someone to do all of the concerts for youth, families and other community outreach,” Mirageas said. Flint had already proven his stripes with the youth orchestra, so his job with the ASO evolved into that of a kind of jack-of-all-trades staff conductor, which has persisted ever since. With Flint’s impending retirement, the orchestra is taking a different tack.

“We’re acting more like our great orchestra colleagues that have a single conductor who does all that an assistant would do and conduct the youth orchestra,” Mirageas said. “So we’re giving Joseph Young some Superman pills and a case of Wheaties on his arrival, because he’s going to be a very busy young man.”