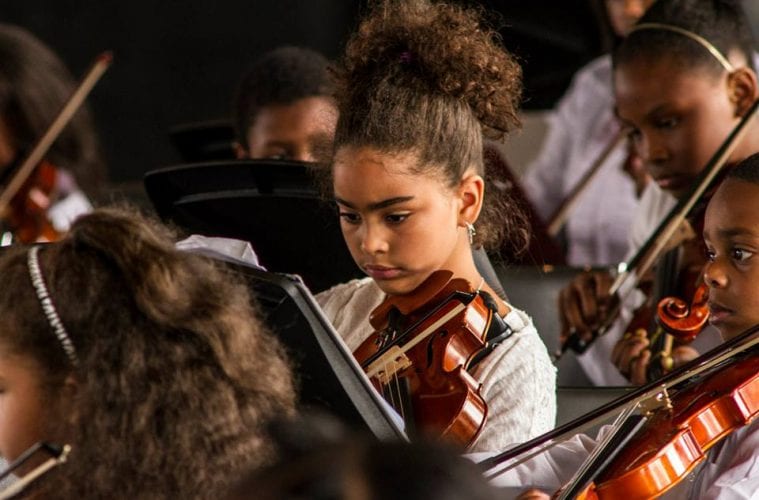 The Atlanta Music Project, a nonprofit that provides conservatory-like music training to inner city children, has received a $200,000 Neighborhood Builders Program Grant from the Bank of America that it hopes will be seed money for a headquarters building in the West End section of the city.

“We’re ecstatic,” said Dantes Rameau, co-founder and executive director of the project that was launched in 2010. “We applied for the grant twice before, so I guess the third time is the charm. We’re hoping it’s a catalyst to obtain funding for a building and to help pay for building upkeep.”

Currently, the Atlanta Music Project is headquartered at the offices of the Atlanta Symphony Orchestra, with five satellite locations across the southern part of the city where kids are taught. Three of those are in recreation center spaces donated by the City of Atlanta. Rameau is also a world-class bassoonist.

The project works with over 200 kids, who are provided with instruments and music instruction from accomplished classical musicians. “We go to neighborhoods where families don’t have resources, transportation or a place to practice or the ability to pay for an instrument,” Rameau said. “We try to make it ultra-convenient and lower all the barriers.”

The Atlanta Music Project was one of two local groups to receive a $200,000 grant. “Elementary through high school students benefit from the creative and rigorous music education that the Atlanta Music Project offers,” Wendy Stewart, BOA’s Atlanta market president, said in a statement. “It exemplifies the critical role that nonprofits and their leaders play to building thriving communities and pathways to economic progress in Atlanta.”

Rameau, an alumnus of McGill University and the Yale Music School, got a taste for youth music education when he was in graduate school at Yale. “We would go into the public schools in New Haven as teaching assistants,” he said. “I loved working with kids and seeing them progress as much as I enjoyed playing music at Carnegie Hall. After that, I wanted to get involved with the community.”

He then received a fellowship to the New England Conservatory, where he studied nonprofit leadership and music education.

Once he moved to Atlanta, Rameau co-founded the Atlanta Music Project in 2010. “It helps these kids have ambition and vision for their future,” he said. “The premise is if a child takes the time and has the opportunity to learn a music instrument, the character traits they develop will help them be proficient at life. That’s why we call it ‘music for social change.’”

The project earned early support from the ASO, which provided office space, and the City of Atlanta, which initially offered the use of one recreation center. The 250 kids now in the program are put through the rigors of a conservatory program. Elementary age kids are taught four days a week, two hours a day. Once kids reach middle school age, they are taught three 90-minute classes a week. Many of the kids learn to play instruments; other study choral and vocal training. The organization purchases most of its instruments, but does accept donations.

The program is open to any kids who have an interest in learning music. The only stipulation is that they have to do the work. “Intensity is the key,” said Rameau, “The kids have to commit to the program. It’s largely self-selecting.” Rameau said kids, especially the younger ones, are usually open to learning to play largely foreign instruments such as the violin or clarinet. They also develop an affinity for music they seldom hear in popular culture. “They’ll say they still love hip-hop, but they also love Mozart,” he said.

The bulk of the organization’s $877,000 annual budget goes to pay professional musicians to teach. “All of our teachers have a bachelor’s of music, and most have master’s degrees,” Rameau said. “We take a lot of pride in that. You need to have teachers of high quality in order for the kids to be great musicians.”

Through an anonymous donor, a scholarship fund has been established at Clayton State University for graduates of the Atlanta Music Project.

The BOA grant will help the project fulfill a long-term goal: the Atlanta Music Project’s own space. Rameau said the organization would like to find an abandoned warehouse around the West End MARTA station. “We want it to be in that area,” he said. “This grant will help other potential donors to take us more seriously. A building will allow us to consolidate all of our office and storage space. We need practice rooms, a safe place to practice. We need a performance space and rehearsal space. We’d like to find a warehouse to repurpose, but we haven’t identified a particular building.”