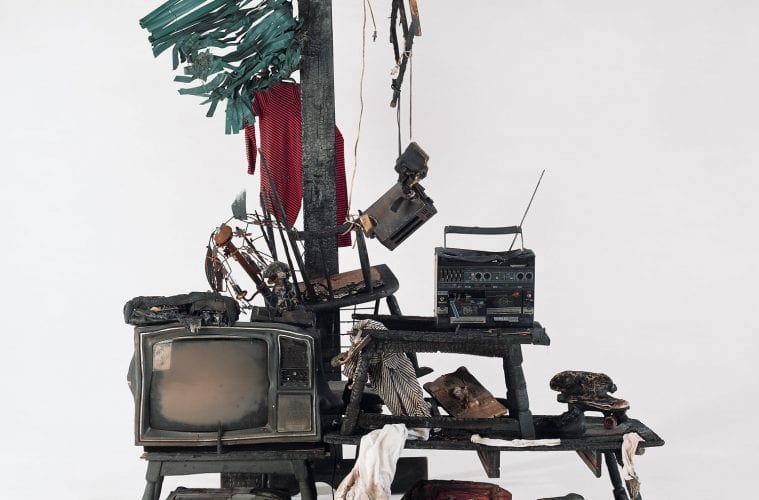 NEWS: Atlanta Contemporary announces a solo exhibition from Lonnie Holley will open up 2017

Atlanta Contemporary has announced a solo exhibition from Lonnie Holley in January. The Alabama native, who made his first artwork at age 29, is known for his assemblages of found objects, incorporating natural and man-made ephemera, such as plastic flowers, crosses and steel scraps, and turning them into totemic sculptures. “We can make art where we have to,” said Holley in a 2014 profile in The New York Times. “Dr. King, if you remember, wrote a sermon on a piece of toilet paper.” Artist Lonnie Holley. Image by and courtesy of Ethan Payne.

Holley had works included in the influential More than Land and Sky: Art from Appalachia at the Smithsonian American Art Museum in 1981, since then his work has been included in collections at the Whitney Museum of American Art (New York, NY), Philadelphia Museum of Art, New Orleans Museum of Art, New Jersey State Museum (Trenton), The Museum of Fine Arts (Houston), American Folk Art Museum (New York, NY), High Museum of Art (Atlanta) and the Michael C. Carlos Museum (Atlanta) as well as elsewhere. “Holley asks us to see on multiple levels, and once these levels are perceived, he asks us for justice,” said critic Lilly Wei in her review of Holley’s most recent solo show, Something to Take My Place, at the Halsey Institute for Contemporary Art. He currently has works on display in Forging Connections: Ronald Lockett’s Alabama Contemporaries in the glass-box lobby of the Anne Cox Chambers Wing at the High Museum, which was curated by Katherine Jentleson in conjunction with the opening of Fever Within: The Art of Ronald Lockett.

This solo exhibition will feature sculptures and drawings on loan from the artist and the Souls Grown Deep Foundation as well as site-specific installations commissioned by Atlanta Contemporary. “Lonnie Holley is one of the most influential artists and musicians of the 20th/21st centuries,” says curator Daniel Fuller. “His powerful work is improvisational and free in that it goes beyond the autobiographical and chronicles daily life and history of people all over the South.” The exhibition will open on January 12, 2017 and run through April 2, 2017. Supplementary programming, including a musical performance from Holley, will take place during that time. For more details on programming and information about additional events taking place at Atlanta Contemporary, visit atlantacontemporary.org.