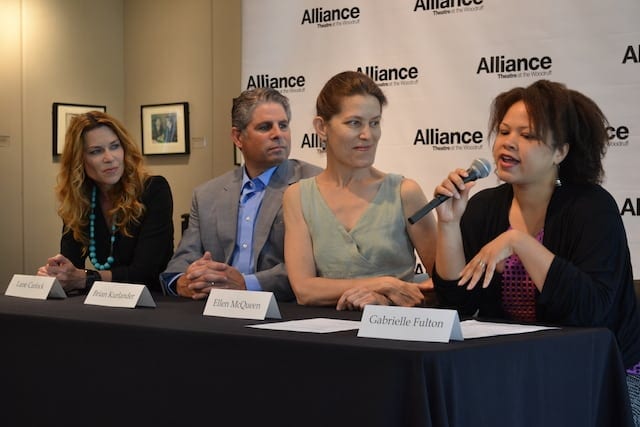 It’s similar to the annual Alliance/Kendeda National Graduate Playwriting Competition — only with local artists. Representatives from the Alliance Theatre talked about the inaugural Reiser Atlanta Artists Lab at a press conference yesterday afternoon with the artists chosen for this year’s showcase.

Launched last year across the theater disciplines for local artists without producing homes, the series drew 68 applicants representing 204 artists. Three were eventually chosen and each of the chosen artists received $10,000 to develop their idea and move forward.

According to Susan Booth, artistic director of the Alliance Theatre, the judges were specific in what they were looking for. “At least three Atlanta artists have to be involved in each project,” she says. “The project can be utterly in nascent stages or one that has legs and is walking around. What we asked was an articulation of how you want to develop it.”

The artists will work with the Alliance staff for a nine-month period, and the projects will be brought to a state where they can be seen by producers. “Our goal is that these amazing artists and productions find lucrative supportive producing homes for their work,” says Booth. “We get right of first refusal because we are producing the lab, but in my heart of hearts, I hope there is a bloodbath. I hope Tom Key [artistic director of Theatrical Outfit] and I are punching each other in the jaw fighting over work that comes out of the lab. That would be fun, for any number of reasons.”

Yet this isn’t about box-office numbers. ”This is not a revenue-producing project,” Booth says. “This is an investment in our local artists.”

A free showcase for the winning projects will be held August 8–10 on the Alliance’s Hertz Stage. This year’s winning projects are Ellen McQueen’s Project’s Project, which weaves true stories of Atlanta’s housing project “war zone,” combining spoken word and dance; Gabrielle Fulton’s Uprising, dealing with themes such as liberty, sacrifice and self-determination in a free black community during Secession Era America; and Lane Carlock and Brian Kurlander’s Moxie, which follows a book made by a late Marine that winds up in different hands and touches lives.

McQueen admits her project would not be moving forward without the Reiser Lab. Fulton, too, is grateful and excited to be in the first group chosen. “It’s amazing to be involved in the first lab,” she says. “It’s where you can set the precedence for what comes next. We can use our imagination, think outside the box for the first one, and if that can’t do it, maybe they can do it in the future. I like being a trailblazer.”

Narrowing the list of projects down to three was tough, says Booth, who says there was a long short list of ones that stood out. She wants to see the applicants expand over the years beyond just playwrights. “We had a preponderance of playwrights and I think that makes sense,” she says. “My hope is that eventually actors will submit projects for showcases, something they are capable of that people have never seen them do. Directors will use it as an opportunity to say, ‘You don’t know I’m here but I am here. Here is 20 minutes of an impossible play I am going to just direct the snot out of it. You’re going to need to pay attention to me.’”

For the time being, the winners will remain at three. “We have had a lot of debate,” Booth says. “We are hoping to increase the amount of developmental funds but we are going to keep it at three. What we don’t want to do is lessen the human resources we bring to bear. As of right now, we don’t want to take on more projects than we have the space, bandwidth and human resources to serve. Three seems good.”

Ultimately, Booth thinks the project is a great way to hone local talent. She noted that the Atlanta artist community grows exponentially each season because of the amount of theater work and the amount of film and television work that is here. “It’s becoming a logical place to make a home,” says Booth. “I think it’s utterly incumbent on all the arts organizations that live and work here that we invest in this community. This isn’t benevolent; this is self interest. When you give amazing artists an opportunity and the resources to work on what is possessing them for nine or ten months, you’re going to get to the end of that process with amazing material any of us will be lucky to have on our stages.”