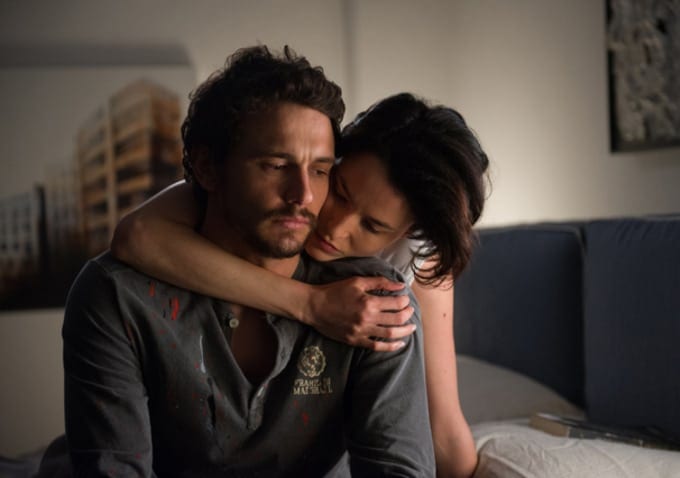 Look, I have enormous, personal investment in the written word. Even so, when a movie starts with the sound of fingers tapping a keyboard, and you realize its main character is a writer, that’s when the heebies meet the jeebies.

Good writers know that the least interesting profession to focus on is their own. Writer-director Paul Haggis is a good writer — a good, earnest, terribly square but Oscar-winning (Crash, Million Dollar Baby) writer. In his latest, Third Person, he lays the ink-stained mantle on Liam Neeson, who plays a novelist named Michael who’s pounding out his latest book at a luxe hotel in Paris. (Haggis himself looks more like actor Paul Giamatti than the rugged Neeson, but hey, it’s his prerogative.)

His estranged wife (Kim Basinger, redefining “thankless role”) talks to him, mopily, long-distance from the States. She complains that he can only feel vicariously through his fictional characters, or asks if “she” is there with him. “She” is Anna, Michael’s young, longtime mistress. As played with edge and smarts by Olivia Wilde, she gives the movie its only reliable jolts of interest and energy. (With this and Drinking Buddies, Wilde is proving she’s a lot more than just a pretty face.)

“I comment on society,” Anna says of her work as a lifestyle journalist, though Michael sneers that she’s just a party reporter. Their chilly-flirty playacting when she first joins him at his hotel is a mini-film in itself, and one of the best sequences in Third Person; it sketches in the push-me-pull-you terms of their relationship in a swift couple of minutes. Then, alas, the rest of the movie happens.

As in his perfectly watchable but perfectly non-Best-Picture-Oscar-worthy Crash, Haggis intertwines multiple narratives and a large cast. More is definitely less here, as the two other main stories push different styles of implausible melodrama on us.

In Rome, Adrien Brody plays Scott, a sort of, um, fashion spy who pays to get the sketches of famous designers, so he can have their work knocked off in cheap sweat shops. At a bar, he meets (and hits on, pretty creepily) a Romanian woman, Monika (Moran Atias). She’s in Italy to pay a hefty ransom to rescue her young daughter from a human trafficker, Marco (Riccardo Scamarcio), the greasy, stubbly personification of the movie’s general xenophobia. Scott, and his bank account, become involved with Monika and her plight, even though he and we suspect it’s all a con.

Meanwhile, in New York, a former soap opera actress (Mila Kunis) is working as a hotel maid, seeking anonymity while trying to regain visitation rights to her son, now in the custody of her rich-asshole artist ex-husband Rick (not exactly a dramatic stretch for James Franco). Seems the kid almost died due to negligence on her part, and she’s trying to make amends. Her lawyer (Maria Bello, also largely wasted) has kid issues of her own; her young son drowned in the swimming pool. And when it’s revealed that Bello’s character is married to one of the male leads, you won’t exactly be surprised.

That’s the thing. From Robert Altman’s big canvases (Nashville, Short Cuts) through Pulp Fiction through the movies of Alejandro González Iñárritu (Amores Perros, Babel) and Haggis’ own Crash, we’re very familiar with this sprawling, interconnected structure. A movie has to include some smart or emotionally moving core to justify our interest now, otherwise it’s just a hollow exercise. That’s what Third Person is.

Haggis sets up connections you care less and less about, because it starts to feel like what it is: a technical, structural trick with no emotional truth. Even the recurrent theme of dead or endangered children feels strictly like a plot device, unfelt. And my goodness, if your patience is strained by the length of the film’s indulgent running time, wait for the conclusion. Without spoiling too much, let’s just say it’s a variation of the sort of cop-out ending that even children quickly learn not to use to wrap up their stories.

Laced with cultural caricatures and casual misogyny, the movie makes you wonder if Haggis has ever actually spent time in other countries, around “foreigners,” or what sort of romantic partner puts up with his view of women as unreliable, unpredictable, damaged sexpots. Even Wilde’s Anna, the loose cannon among the female characters, has to have all of her quirks explained by a dark Freudian secret, implying that her distinctive personality is actually just a series of pathological symptoms. The poor girl needs saving.

Because nothing really lands in Third Person, emotionally or intellectually, it’s hard not to wonder why Haggis spent so much of his time making it. And why he wanted us to waste so much of our time — a whopping 137 minutes — watching it.