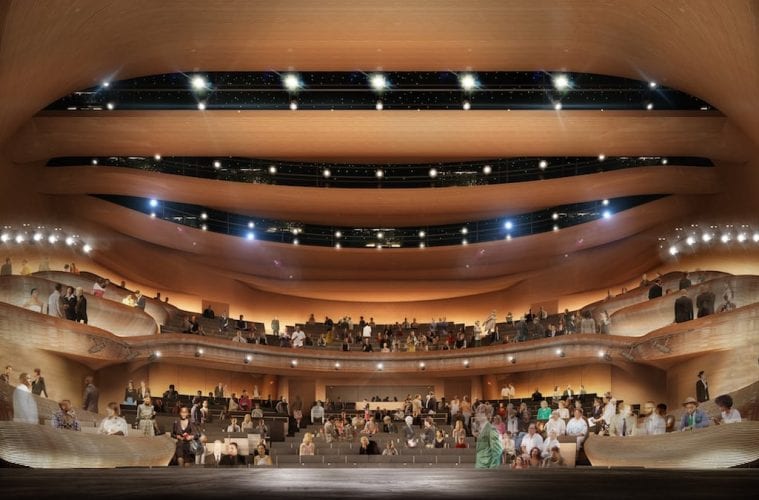 The Alliance Theatre will celebrate its 50th season with a newly renovated theater space and five world premieres.

The theater announced its 2018–19 season today. After a year of performing on the road at various venues around the city while its Coca-Cola stage space was undergoing a $22 million upgrade, the Alliance will return home with the regional debut of Ever After next January, a musical based on the hit film. It will be directed by Susan Booth, the Alliance’s artistic director.

The renovated theater will include technical enhancements such as high-quality sound and will be designed to bring the seats closer to the stage. The renovations include upgrades to the theater’s rehearsal spaces, education facilities and artist support spaces.

“The Alliance turns 50 this year,” Booth said in a press release. “Half a century of exploring what it means to be human in a world that renders that inquiry more complicated every day. And in the time honored tradition of marking zero-birthdays with large parties, we’re celebrating 50 years of art by throwing a season long doozy.”

The new performance space will be showcased in a series of open house events beginning in October. Then Ever After will open up the new space for business January 19. With book and lyrics by Marcy Heisler and music by Zina Goldrich, the musical is a modern take on the Cinderella legend.

The Alliance season will open on the road at the Atlanta Botanical Garden September 5 with a world premiere outdoor staging of A Midsummer Night’s Dream adapted and directed by David Catlin, founding ensemble member of Chicago’s Lookingglass Theatre Company.

The next mainstage production will be the annual stand of A Christmas Carol at the Cobb Energy Performing Arts Centre beginning December 12.

Following Ever After, the Alliance will present the world premiere of Pearl Cleage’s Angry, Raucous and Shamelessly Gorgeous, a drama that draws from today’s volatile political landscape. Cleage’s play opens March 20.

The regional premiere of Ride The Cyclone will open May 1, a musical lauded by the New York Times as “high spirited and just plain fun from start to finish.”

The Alliance will also offer world premieres on its smaller Hertz Stage, including Goodnight, Tyler by B.J. Tindal, this year’s winner of the Alliance/Kendeda National Graduate Playwriting Competition. The play, which opens February 16, looks at the life and legacy of a young black man who was killed by a police officer.

Also coming to the Hertz Stage is a world premiere musical by Atlanta playwright Phillip DePoy, Nick’s Flamingo Grill, opening September 29. The musical is about two World War II-era jazz musicians who find success in Paris nightclubs and then return home to 1950s Georgia. It is inspired by the true story of the first integrated nightclub in Atlanta.

The season will include Knead on the Hertz Stage opening November 13, a world premiere by Mary Lynn Owen, winner of the Reiser Atlanta Artists Lab competition and a semifinalist for the 2017 O’Neill National Playwright’s Conference.

Another world premiere, Approval Junkie, opens April 5 on the Hertz Stage. It was written by (and stars) Georgia native Faith Salie, the comedian and Emmy Award-winning journalist best known for her appearances on NPR and CBS News Sunday Morning.

The Alliance will also stage three other productions for its Youth and Families series, including Winnie-The-Pooh in conjunction with the Pooh exhibit coming to the High Museum of Art, Paige In Full and a take on the classic The Wizard of Oz.

“Our hope at the Alliance is that audiences will join us in a yearlong celebration of all that is messy, wonderful, dark and magical about being human,” Booth said. “I can’t think of a better way to celebrate a 50th anniversary than that.”