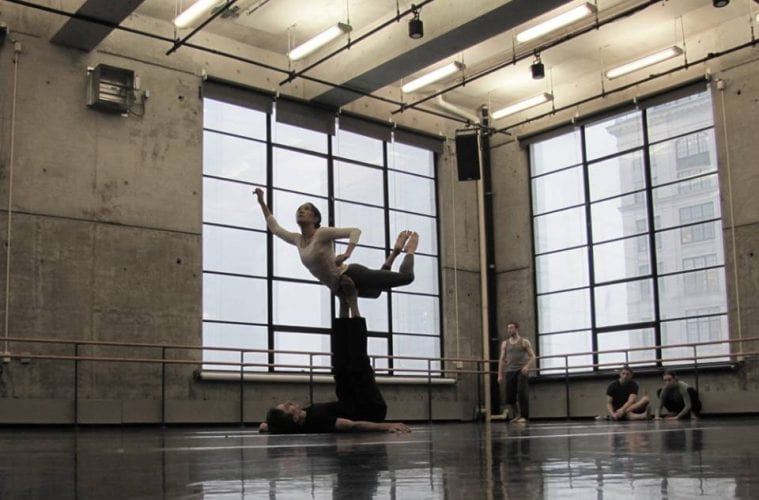 Preview: Terminus leaps through the “Next Door” with choreographer Danielle Agami

This time last year, as five star Atlanta Ballet dancers were in the process of forming Terminus Modern Ballet Theatre, director John Welker was asked how he would measure success. “We’ll be successful if we’re still around in a year,” he replied with a nervous laugh.

A year later, with sold out (and critically lauded) world premiere shows at the Westside Cultural Arts Center and Serenbe under their belt, Terminus has reached new benchmarks for success. This weekend, the company takes a significant step forward with its first theater run and its first commissioned work by an outside choreographer.

Terminus will debut Next Door, a world premiere by rising Los Angeles choreographer Danielle Agami at the new Kennesaw State University Dance Theater in Marietta. The 450-seat theater is a sizable leap from the venues Terminus has used so far. Danielle Agami met the Terminus dancers through her work with Atlanta Ballet.

Even the rehearsal schedule marked the importance of this show for Terminus. The troupe worked with Agami in December in Atlanta then traveled to New York City in February for a week-long residency with her, rehearsing at the Alvin Ailey complex and the Baryshnikov Arts Center, where they did a studio showing of the work.

Agami is one of the hottest new choreographers in dance. She was born in Israel and was a member of the Batsheva Dance Company, where Ohad Naharin perfected his celebrated Gaga movement. Agami eventually became artistic director and rehearsal director for Batsheva Dancers Create and then moved to New York to become senior manager of Gaga USA.

She eventually founded her own dance company, Ate9, in Los Angeles, and was one of Dance magazine’s 25 to Watch in 2015. She is the 2018 recipient of the Virginia B. Toulmin Fellowship for Women Choreographers at New York University, where she is in residency and will create a solo work.

“I knew them very well from that process,” Agami said during a break in rehearsals at the Terminus Westside studio. “Then they formed Terminus and asked me if I would create a full-length program for them. After marinating about using five dancers whose main experience is ballet for a 55-minute work, and after a moment of fear, I decided to go for the challenge. It’s been very smooth, very intriguing and fulfilling. So they were right to ask, and I was right to say yes.”

Agami has her own experience with starting a dance troupe, and she applauded the Terminus dancers for seeking their own vision. “It’s a wonderful passion to say, ‘No, this is not what I believe in, so I’m not taking part in this,’ and it’s rare,” she said. “I preach to dancers to pursue what they’re passionate about and to dare to go for it. So this is an important mission. With all due respect to money, we have to fight for the hope that people will support contemporary art just as much as they support conservative approaches.” Agami said one of her challenges in conceptualizing Next Door was to highlight the dancers’ strengths, but to take them out of their comfort zone. She also had the challenge of working with dancers that Atlanta audiences have followed for a decade and more. “I want to present them in a new light for both themselves and an audience that knows them so well, almost too well,” she said.

The creative process was one of collaboration and a choreographer getting to know a group of dancers on a deeper level. “They’re very lovely people to be around, but I knew that coming in,” Agami said. “And that’s important because it is reflected from the stage. As a choreographer, it also reflects back to you and your confidence to explore. You want to be challenged, and I knew I could go for a leap with them.”

Her past experience with the dancers was to stage works created by Naharin; this time, she is building a work specific to their bodies and their talents. “They are really hard workers,” Agami said. “There’s almost no moment in the studio they won’t try again and again. They carefully listen to instructions. They pay attention. They’re very curious, which is important for an artist, to be available like a playful child. They are willing to play with me.”