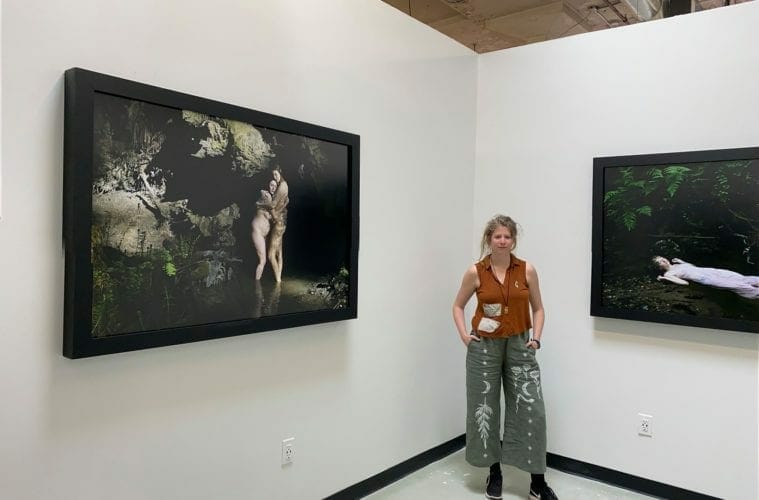 Photographer Charlie Watts is one of hundreds of Atlanta artists who have lost work and income because of the pandemic. (Photo courtesy C4 Atlanta)

A new survey of more than 1,000 metro artists shows a $7 million loss in income due to the Covid-19 pandemic through April 24.

“The implications of this are devastating,” says Jessyca Holland, executive director of C4 Atlanta, which conducted the survey in partnership with the DeKalb Entertainment Commission. “My thought going into the survey was, ‘How do we make the case that this group of workers are particularly vulnerable right now?’ The survey is telling the story.”

The survey of individual artists dovetails with a survey of nonprofit arts organizations released last month that showed at least $10 million in losses so far. “I don’t think there’s a magic answer for anyone,” says Lara Smith, managing director of Dad’s Garage Theatre Company, who conducted that survey which included 55 Atlanta area arts nonprofits. “The immediate thing is money, and everyone needs it.” Jessyca Holland says the survey showed the “breathtaking” impact Cover-19 has had thus far on the arts community.

More than 1,000 individual artists participated in the C4 Atlanta survey that included people from theater and acting, film production, visual art and music. Most of those artists said they could meet their financial obligations through May or June. But if Covid-19 pandemic restrictions continue through summer and beyond, 75 percent said they are not confident they can stay afloat financially through August.

“They expect a second wave of the virus in the fall, and we could be talking no programming until 2021,” says Holland. “It’s pretty dire. I worry about timely help and whether federal programs will be continued.”

The survey was modeled on a similar study done by the Mid-America Arts Alliance. The Atlanta Regional Commission has the survey’s raw data and is taking a deeper dive into what it reveals. But the preliminary data released by C4 Atlanta shows the Covid-19 pandemic has had a profound impact on Atlanta’s arts community.

— 66 percent of respondents have lost three or more paying jobs; 34 percent have lost six or more.

— More than 83 percent have lost enough income to impact their livelihood.

— 64 percent say their creative output has decreased since the pandemic.

“We knew the impact was going to be enormous,” Holland says. “It’s between $5 million and $7 million with a little over 1,000 people. We could be looking at a significant loss of income in the hundreds of millions. A large number of people are living gig to gig. When you see the impact, it’s breathtaking. That uncertainty is scary.”

Holland says the survey also revealed a wide gap between those who work for commercial film companies and nonprofit organizations. “We reached a lot of people in film and television,” she says. “Their immediate loss is greater, but they also have a greater savings net than people in visual arts and theater and music. The gap between commercial entertainment and the fine arts produced by nonprofits is significant.”

The Atlanta data will be shared with Mid-America Arts Alliance and  Americans for the Arts, which has conducted national surveys. Photographer Charlie Watts, who had a portrait studio in Ponce City Market, is one of the artists aided by the Lost Gig Fund. “All my work has been postponed until 2021 including my exhibition at the Atlanta Botanical Garden,” she said in a press release. “My portrait studio will have to permanently shutter because of Covid-19, and I have no work lined up until 2021. The fund was a glimmer of light in a dark moment.”

Two national groups — the National Association of Teachers of Singing and the American Choral Directors Association — have told members that it may not be safe for another 12–18 months to have the full-scale rehearsals, performances and in-person gatherings  considered normal three months ago.

A major concern among arts leaders is whether audiences will feel comfortable gathering for public performances until a Covid-19 vaccine is created, which is thought by most scientists to be months away.

“The responses we’ve received show that we need to be thinking long term,” says Morgan Carlisle, who oversees C4 Atlanta’s Lost Gig Fund as the organization’s member services manager. “Reading the many stories of extreme financial loss amongst Atlanta artists is telling about the culture Atlanta has built and how precarious it is. The same people who create that ‘Atlanta experience’ are the same people losing their touring gigs, closing their box offices, taking down their exhibitions and canceling their educational classes. It’s heartbreaking. What will the city look and sound like when it is safe to go outside again?”