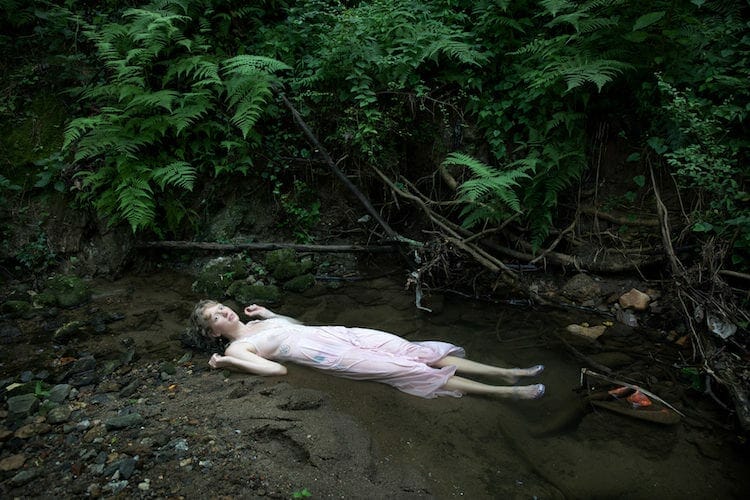 "Ophelia," in Charlie Watts' "Hortophilia," photographs and sculptural assemblages on view through December 7 at Whitespace

Review: In “Hortophilia,” Charlie Watts comments on society and images of women

Charlie Watts’ Hortophilia, at Whitespace through December 7, addresses head-on a number of difficult topics regarding the human body, society and images of women. These compellingly beautiful photographs and sculptural assemblages may well tell the viewer even more than their instigator claims — or they may question our right and capacity to make such assumptions.

Watts fulfills her complex photographic mission by subverting art history and mythology (one sculptural work here, a collaboration with Nikki Starz, is titled Leda as the Swan, giving Leda the active role that the Greek myth assigns to Zeus) and what used to be called “the male gaze” by placing women, many of them naked, in natural settings in which they are at home and responding to cues from nature, or their female partners, or themselves. Sometimes the photographs quote the works of the pre-Raphaelite painters that have so often been considered problematic, but they quote them against themselves. In “Leda as the Swan,” a sculptural collaboration with Nikki Starz, Watts subverts art history and mythology.

Watts explores our gender-fluid times with a directness that is experiential but also grounded in contemporary practices designed to reawaken or restore the body’s place in nature. How these fit together, Watts doesn’t tell us, but she trusts in the explanatory power of her photographic images and physical installations.

Ophelia is the show’s most untransformed citation of an image that seems to have generated any number of photographic explorations of women in flowing clothing interacting with bodies of water. Watts’ Ophelia is lying back in a narrow stream surrounded by greenery, much as Sir John Everett Millais presented his version of the character described so memorably by Shakespeare in Hamlet. But Watts includes Ophelia twice in Hortophilia — in the second version, Hortophilia III, a different photo of Ophelia in the river has been bonded digitally with the foreground of a forest scene in which two naked young women (one of whom is Watts) make their way through a vast stand of trees into which they blend in an idealized harmony. It would be dangerous to puzzle out possible allegories in photographs that are this tied to personal stories. There is much that is universal, but there is also much that stems from individual interpretations that have shaped how the image has been composed. What, for example, is the significance of the fact that the two African American practitioners of the therapeutic practice known as the Nap Ministry are photographed (in Ministry of Rest III) close-up, fully clothed and reclining in open terrain?

It would be both foolish and arrogant to impose an outside meaning on an image that springs so fully from an inward imperative and intuitive conversation with the photographer. This is true even though we can research the history of the Nap Ministry as a body-centered spiritual response to the pressures of a Master of Divinity program and know it has become a full-fledged method of meditation.

Hortophilia, in fact, invites viewers to encounter a series of deeply experienced artistic conversations even as it encourages humility in attempting to interpret them. This may be a show in which it’s wise to keep silent.

At 7 p.m. Thursday, November 21, Watts does an artist’s talk and signs copies of her self-published book, Hortophilia, on sale at the gallery. On Thursday, December 5, 7–8 p.m., the Nap Ministry presents a rest meditation and nap talk on the theories of rest as resistance (reservations essential: RSVP to gallery@whitespace814.com).