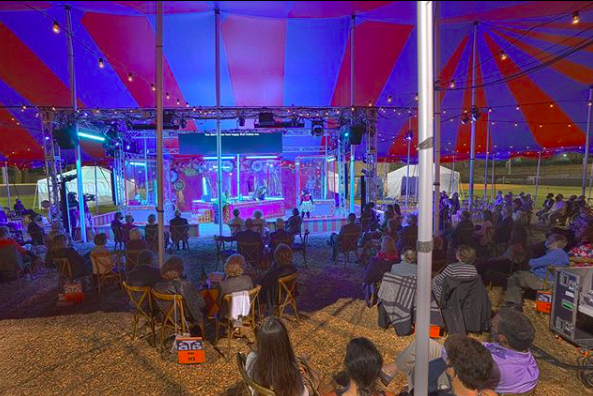 The Atlanta Opera has added a “Pagliacci” performance to its Big Tent Series of shows at Oglethorpe University. (Photo by Ken Howard)

The Atlanta Opera, the only major company in North America with in-person programming, has added a 10th performance of Leoncavallo’s Pagliacci, on November 15, to its Big Tent series on the baseball field at Oglethorpe University.

The opera is alternating performances of Pagliacci and The Kaiser of Atlantis. Pagliacci features Reginald Smith Jr. as Tonio and Talise Trevigne as Nedda, and has played to sold-out audiences since opening October 22. Most remaining shows are sold out, although limited seating is still available for the November 11 and 13 performances.

Get tickets for those shows and the newly announced performance HERE (read our story about the experience of seeing opera under the big tent). Susan Stensland will retire as the symphony’s executive director in June.

Susan Stensland, the executive director of the Georgia Symphony Orchestra since 2012, will retire in June.

Stensland, who began her career with the symphony in 2006 as operations and general manager, will join the board of directors once she retires. A search committee is looking for her replacement.

“It has been, and continues to be, a sincere honor, privilege and joy to be part of this organization,” Stensland said in a press release. “I have grown and learned and received immeasurable gifts of friendship, community and wonderful music.”

The Marietta-based symphony is in its 70th season. During Stensland’s tenure, it has grown its budget by 81 percent and added the Georgia Youth Symphony Orchestra, now the largest youth group in the Southeast.

“We are incredibly proud of what we have been able to accomplish together during Susan’s tenure,” said board chair Robert Bonstein. “Thanks to the legacy of strength and purpose Susan has built over the years, we are poised to move forward with great optimism.”

Groundbreaking is scheduled in December for a Black Music & Entertainment Walk of Fame on the sidewalks of Martin Luther King Jr. and Northside drives near Mercedes-Benz Stadium downtown.

The Black American Music Association and the Georgia Entertainment Caucus announced the walk of fame last month. Artist DL Warfield, in collaboration with sculptor Ed Dwight, will create the official emblem to be embedded in the sidewalk for each inductee. The walk will honor iconic individuals and organizations that have impacted Black culture. An inaugural celebration is planned for January during the MLK holiday weekend (January 16–18).

“As a proud Black man who has been a part of the professional entertainment community for 45 years, I’m elated to have the opportunity to help usher into Atlanta this historic walk of fame,” Michael T. Mauldin, cofounder of the Black American Music Association, said in a press release. “There could be no better location in the world than MLK Jr. Drive to profile the heritage, legacy and future of our global Black music and entertainment culture.”

Choral groups, musicians partner for “Home for the Holidays” series Singers and musicians from 32 Georgia ensembles will come together for a “Georgia’s Home for the Holidays” virtual-music video series debuting November 27 on YouTube and Facebook.

The series, led by the Georgia Symphony Orchestra and Chorus, Atlanta Master Chorale and the Michael O’Neal Singers, will feature hundreds of leading choral and instrumental musicians.

Each five-to-seven minute video will feature one choral or orchestral group. The project originated during a Zoom meeting among leaders of choral groups to discuss their struggles with programming amid the COVID-19 pandemic.