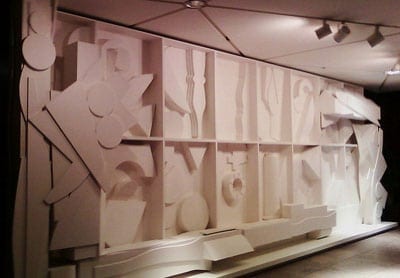 The clock is ticking.

Louise Nevelson’s “Dawn Forest,” the monumental installation that has graced the Georgia-Pacific Center lobby since 1986, will move to Florida in June. The company is remodeling the lobby, and Georgia-Pacific LLC and MetLife, the owners of the work, have donated it to the Naples Museum of Art.

Nevelson, who died in 1988, remains a towering figure in American art. She is best known for assemblages constructed of found wood, often scavenged scraps, woven into tight compositions and unifed by monochrome color, usually white or black.

“Contemporary sculpture and installation-based art owe a considerable debt to Louise Nevelson’s aesthetic risk taking,” wrote Brooke Kamin Rapaport, who curated the 2007 exhibition “The Sculpture of Louise Nevelson: Constructing a Legend” at the Jewish Museum in New York. She was also a pioneer as a female artist in what was in her time very much a man’s world.

“Dawn Forest” is Nevelson’s largest installation. The multi-part piece, constructed in her signature assemblage style and doused entirely in white, is composed of standing columns, some as tall as 25 feet, and vertical hanging pieces, which punctuate the long lobby, as well as an 11-by-26-foot wall relief on the mezzanine.

James Malone, public relations senior manager for Georgia-Pacific, would not discuss the thinking behind the deaccession, other than to say that the company considered renovation plans with and without the installation and that it wanted to put more retail space into the lobby.

The company had shopped the sculpture for quite a while. “We were looking for an institution that would be committed to exhibit all the pieces together,“ Malone said.

The scale of the work and associated costs, including underwriting the not inconsiderable expenses of deinstallation, crating, shipping and insurance, no doubt were stumbling blocks.

Atlanta’s High Museum of Art, which owns the maquette of the piece, was among the institutions that G-P approached. “We really struggled with it,” said chief curator David Brenneman. “It doesn’t physically fit in our building. That’s the long and short of it.” The High’s Robinson Atrium in the Stent Wing, the only possible site, has many uses that such a sculpture would have inhibited.

“We were really sorry about it. It’s a major work of art in Atlanta,” Brenneman said. “We didn’t make the decision lightly, but we just couldn’t do it.”

Carlos Museum Director Bonnie Speed also fielded an inquiry, but her museum didn’t have the space either. There were also some preliminary talks with Emory University.

Myra Daniels, founder and CEO of the Naples Museum of Art, said she heard about the sculpture’s availability about six weeks ago and immediately flew up to see it. “I committed to it on the spot,” Daniels said. “Our collection’s strength is in American modernism, and Nevelson was at the top of our wish list. This is a once-in-a-lifetime opportunity.”

The 10-year-old Florida museum is going to some lengths to accommodate ”Dawn Forest.” It will give over its domed entrance-reception area to the piece and relocate the Dale Chihuly chandelier now hanging there. The museum will also construct a new function space on its campus. “The Nevelson will be well cared for and treasured,” Daniels vowed.

That’s well and good for Naples; it’s a loss for Atlanta. “It’s distressing to hear it’s leaving Atlanta,” Speed said. “It’s unfortunate that we were unable to keep this iconic piece of public art.”