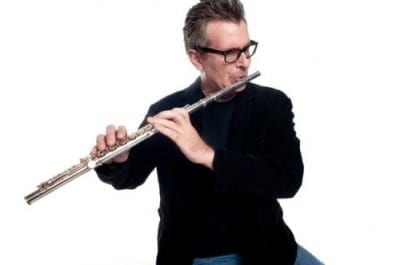 Keyboardist and flutist Bradford Rogers’ music exists in a multitude of genres. His debut, “Jihad” — self-released in 1998 — is a vocal-driven concept rock album with the occasional flute solo. He is a key piece of alto saxophonist Nick Longo’s modern jazz band.

In the decade-plus since that release, Rogers has immersed himself in a jazz language, forming a vocabulary drawn from bebop, funk and African and Latin styles. His development from rock god to multi-instrumentalist has been so complete that he snagged a “Future of Jazz” award at the 2008 Atlanta Jazz Festival.

“Jihad” was firmly rooted in distorted guitars and a stout backbeat, albeit with a few modernistic flourishes. But Rogers’ newest release, the five-track “Guiro” (Worldsongs Media), is more musically broad and properly highlights his main instrument, the flute. His heavy flute tone has an edge of breathiness, and he’s comfortable enough with the instrument’s range to wander around, sonically, during solos. He taps into some Ian Anderson-like techniques as well, such as flutter tonguing and humming while playing.

The CD, as a whole, is fusion party music, propelled by a get-up-and-move rhythm section. Aided by guitarist Billy Wilkie, drummer Sean O’Rourke, percussionist Tim Green and bassist Joe Reda, Rogers attacks three of his own compositions and two covers.

“Are You Going With Me” by guitarist Pat Metheny and the Miles Davis classic “All Blues” are the most obvious connections to the jazz world, but Rogers even blurs the genre definitions on these songs. Metheny’s composition has an ’80s pop bent, fleshed out by synthesized strings. Bradford here gives his flute a Japanese shakuhachi feel, breathing out long, resonant notes, bending the pitches and adding light vibrato as the notes decay. Davis’ song is turned into a hip-hop jam — the kind of tune that dares a listener to sit still — with a floating, simple melody on top of a gurgling keyboard and a drum kit entrenched in a heavy groove.

“Chance (Intermezzo)” — a conversation between the flute and Nick Longo’s late-night saxophone — is played out against a medium funk drum beat. Longo’s guest appearance helps strengthen the CD’s bond with mainstream jazz; he has an R&B style that is heavily indebted to Michael Brecker and plays with the unbridled enthusiasm of a James Carter solo.

The tunes on “Guiro” are rich with percussion. Rogers layers his keyboards low in the mix, adding multiple tracks on top of this base to thicken the sound. It’s party music that seems tailored to a jazz festival crowd. With “Guiro,” Bradford has transformed as a musician, but I feel that you may have to hear these songs live to get the full effect.